Researchers from Tel Aviv and Harvard University have developed a ‘human-on-a-chip’ that will accelerate the drug testing process. 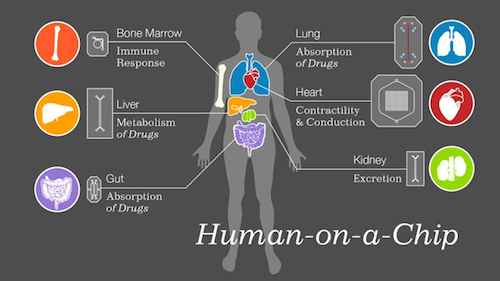 Human on a Chip
The New Stack

We’ve discussed a variety of body parts on chips that were developed for drug testing, including neurons and placenta. According to a recent Medgadget article, the latest development is a “human-on-a-chip” that links up to 10 organ chips to mimic blood flow between different organ systems. The devices allow for more comprehensive drug testing, allowing scientists to see the effects of a drug on multiple organs at the same time. This could lead to cheaper drug testing and spare animals that were once subjects of tests.

“We serially linked the vascular channels of eight different Organ Chips, including intestine, liver, kidney, heart, lung, skin, blood-brain barrier and brain, using a highly optimized common blood substitute, while independently perfusing the individual channels lined by organ-specific cells,” explained Richard Novak, a researcher involved in the study. “The instrument maintained the viability of all tissues and their organ-specific functions for over three weeks and, importantly, it allowed us to quantitatively predict the tissue-specific distribution of a chemical across the entire system.” A video showing the process can be seen here.

Flexo-Quality Print on Recycled Board Spruces up CBD Shipper

Nobody can measure with any real accuracy what impact Covid-19 will have on packaging. But what packaging professional wouldn’t value a glimpse into how things might look post-pandemic, especially if that glimpse comes from an experienced veteran?
Pat Reynolds
May 21st, 2020

Economic Outlook: 2020 and Beyond