Successful live stream of the FAT. 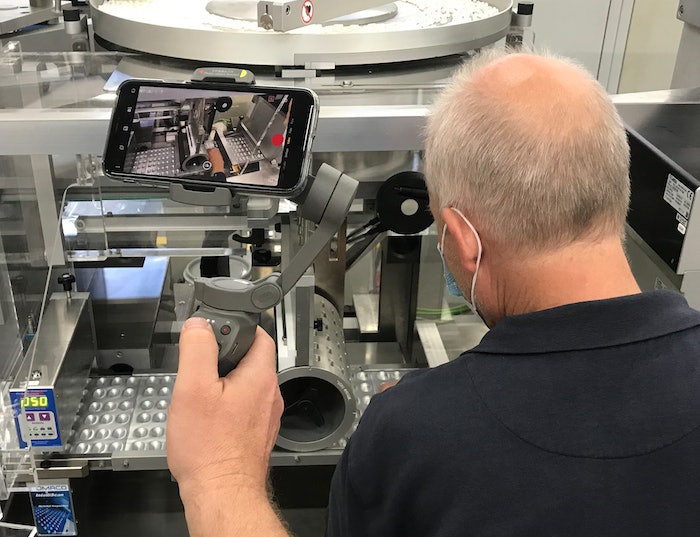 Live stream of a factory acceptance test for a Romaco Noack blister machine.

Romaco is responding to the corona crisis by taking new approaches with the factory acceptance tests for its machines. The first Romaco Noack blister machine for a pharmaceutical producer in southern China has now passed its virtual FAT, which was carried out via a live stream.

In the light of current travel restrictions due to the COVID-19 pandemic, Romaco is now organizing its day-to-day operations in virtual space. Since the pharmaceutical machinery manufacturer’s customers are not allowed to attend the factory acceptance tests for their new equipment in person, Romaco has begun carrying out FATs via a live stream or a video conferencing facility instead.

The first live remote FAT for a Noack blister machine was recently completed successfully at the Romaco manufacturing facility in Karlsruhe (Germany). This machine for a pharmaceutical producer in southern China can now be shipped and put into operation as planned. Apart from the fact that the customer was not physically present, the virtual FAT followed the same procedure as its conventional counterpart. According to the FAT report, all tests relevant to production and safety were performed on the machine and streamed live.

Half a day was required for the virtual acceptance of the Noack 623 blister machine, built to seal ultra-lightweight and almost transparent hard gelatine capsules in aluminium-aluminium blisters. The people responsible at the customer end in China monitored the various functional tests closely during the live broadcast. The project manager in charge at Romaco China was at their side to translate any questions and answers straight away and ensure problem-free communication.

“The only things we have to do without when carrying out digital acceptance tests are the meals we normally eat together and of course the group photo standing next to the machine after it’s passed the FAT,” says Markus Frey, area sales manager at Romaco Pharmatechnik GmbH in Karlsruhe. “We intend to catch up on all of that later on after the pandemic is over.”

In the meantime, Romaco is developing a certain routine when it comes to streaming factory acceptance tests live. A blister line, complete with cartoner and case packer, is currently being acceptance-tested via a live link for a French manufacturer of contract packaging. Parallel to this, preparations are also under way for the FAT for two Romaco Siebler effervescent packaging lines destined for a pharmaceutical group in the US.

Listen to the unPACKed with Packaging World podcast for Matt Reynold's take on the seesmic shifts in packaging caused by COVID-19 and societal call for social responsibility.
Sean Riley
May 14th, 2021

As the first vaccine to arrive in the Northwest Territories, the Moderna Vaccine will be distributed through the FedEx network and Innomar storage facilities.
Feb 1st, 2021

For ultra-low temperature (ULT) storage and transportation, a new entry in the cold chain market can power freezers off the grid. In related news, ULT freezers were purchased for Puerto Rico and U.S. Embassy vaccines efforts.
Keren Sookne
Jan 28th, 2021
More in COVID-19

Vaccines sent to certain German cities may have reached up to 7 C higher than the acceptable temperature range in transportation.
Melissa Griffen
Dec 28th, 2020