A supplier of PET preforms for Coca-Cola, Western Container installs a lid-placing cell that features a six-axis robot that reliably and accurately picks and places lids onto reusable totes.

Western Container Director of Engineering and Manufacturing Systems Darrel Smith, who handles capital procurement and machine design and installation for the company, is a strong advocate for automating processes within the plants. Shares Smith, every one of Western Container’s plants utilizes Laser Guided Vehicles (LGVs) as well as other robotic systems.

While some of the desire to automate is a response to the always-tight labor market, it’s not the main reason, says Smith. “It’s the total cost of business that’s the driving force in putting in automation,” he explains. “It’s a more efficient, productive way to run the business.”

In early 2019, Western Container embarked on a project to add LGVs to its Hattiesburg plant. However, this meant one of its manual operations had to be automated to remove the operator from the path of the LGVs. The task involved placing lids on top of reusable plastic bins, from Orbis, that hold finished preforms, at speeds to 1,000 totes/day. 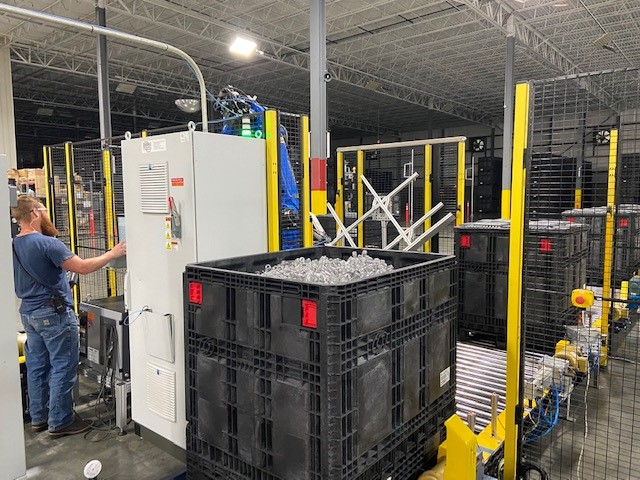 The reusable bins hold piles of PET preforms that in some cases need to be leveled before the lid can be placed.While Smith had worked with other robotics integrators in the past, he reached out to a more local operation, DePeuter Packaging Solutions (DPPS), in Houston, to provide guidance on automating the lid-placing process. Smith had several requirements for the system. One was that it needed to be able to meet speeds of 45 bins/hr. Next, it had to be able to handle the plastic lids, which weigh 12 lb and measure 40 x 48 in., as well as square them before placing them on top of the tote, without having to use complex vision systems. “The lids might be out of alignment on the stack—for example, a half an inch—so you’ve got to bring the lid to a zero point before you can put it on a bin,” Smith explains. “Otherwise, you’ll put it a half-inch out of skew on the load.”

The final requirement was reliability. “Once we put in the system, there would no longer be a person standing in that area,” Smith says. “So it had to be able to run.”

To address these requirements, DePeuter engineered a cell equipped with a Yaskawa GP35L six-axis general-purpose robot that features a 35-kg payload, a 2,538-mm horizontal reach, and a 4,449-mm vertical reach. It also supplied the cell’s conveyors, guarding, and PLCs.

The lids are delivered to the cell by an LGV, after which the DePeuter-designed system takes control of them, indexing the stack into the cell. When a lid is ready to be placed on a tote, if it’s out of center, it’s set in a gravity jig, where it falls to a zero point, after which it’s repicked by the robot. When the bin comes into place, the end-of-arm tool (EOAT) wipes down the pile of preforms in the bin to make it level, and places the lid on top of the bin. Once the lid is placed, the bin is carried out of the cell by conveyor. 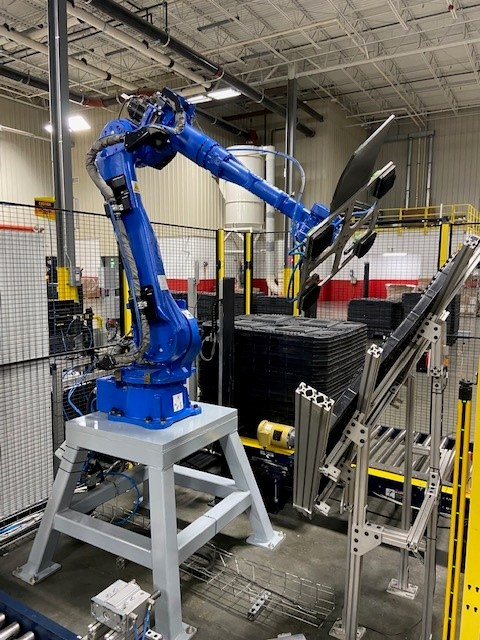 The robot is equipped with a custom-designed EOAT to pick up the heavy plastic lids and wipe down the contents of the bins.To perform the tasks of picking up the heavy plastic lids and wiping down the contents of the bins, the robot is equipped with an EOAT custom-designed by DePeuter. As Smith explains, the robot picks and places the lid using a series of vacuum pads, while a plastic plate attached to the EOAT is responsible for wiping down the pile. “The robot runs a series of movements and actually levels the pile of preforms, moving in different directions,” he says.

However, not all bins have contents that require leveling. It depends on the size/quantity of the preforms within and whether the bins even get a lid, as some preforms are packed in bags inside the bins, per the customer’s request, eliminating the need for a lid. “Another good thing that DePeuter has done is they made the HMI screen very user-friendly,” says Smith. “And so we can make changes to the process very easily. We built all that on the front end, and it worked out perfectly.”

Each bin is labeled with a barcode that contains information on what’s inside the container. When the bin enters the cell, a Keyence camera takes a picture of the barcode, after which it interrogates the barcode data, which is used to determine the program that should be run for that bin. “Does it not put a lid on it? Does it not wipe it? Does it put a lid on and no wipe? It’s just a series of programs it can run based on the barcode,” says Smith.

Since the system was installed in the Hattiesburg plant in October 2019, Smith says it has exceeded his expectations in both performance and reliability, placing more than 120,000 lids/yr. In fact Smith is so satisfied, he ordered a second robotic lid-placing system from the integrator, which was installed at Western Container’s Tolleson plant in July 2021.

Access the entire annual report on robotics from Packaging World: “New Advances in Robotics for Packaging”

PACK EXPO Las Vegas and Healthcare Packaging EXPO (Sept. 27-29, Las Vegas Convention Center) will reunite the packaging and processing community. With over 1400 exhibitors, no other event in 2021 will bring together a more comprehensive gathering of suppliers offering new products, technologies, and solutions. Attendee registration is now open.