A 25,000 sq-ft plant addition, FlexMove acquisition, and conveyor line expansions are among the key 2016 milestones for the conveyor systems firm. 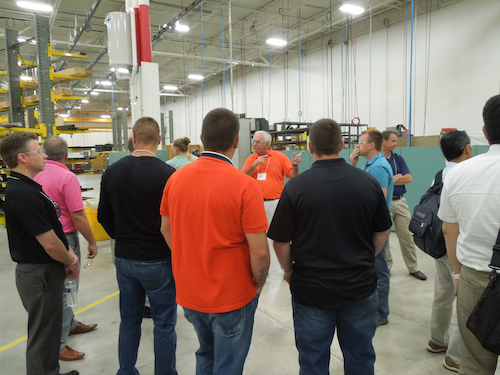 Dorner Mfg. celebrates its 50th anniversary in business with three days of festive events June 14-16, at its headquarters in Hartland, Wis. Dorner designs, manufactures and integrates of conveyor systems for companies worldwide.

Beyond its “golden” anniversary, Dorner achieved several key milestones this year, including the following:

• Opening its first office in Canada

• Expanding its Hartland headquarters by adding a 25,000 sq-ft expansion to its manufacturing area to meet future production goals and anticipated growth

• Major expansions to many of its conveyor lines, including its AquaPruf sanitary, SmartFlex and 2200 Series platforms

The anniversary events kicked off June 14 with a Dorner Summit Meeting in which corporate leadership provided an update on business operations; group sessions; plant tour and other activities.

A June 16 Employee Celebration included employee-guided plant tours; food, games and other activities in an event open to all Dorner employees and their immediate family.

The company was founded in 1966 by brothers Wolfgang, Horst and Werner Dorner. Initially, Dorner was a tool and die shop, but transformed its business to focus on conveyors in the early 1970s. In 2012, the brothers sold the business to Incline Equity Partners of Pittsburgh. Today, Dorner has a staff of about 250 employees, and its conveyors operate in more than 1,200 industries.

“Our philosophy today mirrors that of the one set forth by the Dorners 50 years ago— a philosophy based on being responsive to our customers,” says Terry Schadeberg, President and CEO, Dorner Mfg. “Carrying the torch forward and continuing to live up to the ideals established by the Dorners is something every employee embraces. We’re very excited for what the next 50 years holds for Dorner.”

A new 4-page guidance from FDA comes on the heels of an increase in repackaging drugs for administration as a single dose.
FDA
Aug 3rd, 2020
Packaging/Filling

The vial filling and sealing machine is designed to allow labs and small-scale pharmaceutical production to benefit from automated filling.
Tekni-Plex
Jul 22nd, 2020

Though the customer was almost 5,000 miles away, they witnessed the FAT in action as if they were on site – thanks to hardware and modern digital solutions.
KOCH Packaging Systems, Inc.
Jun 18th, 2020

The first session of IMA’s virtual event just concluded successfully, while the second one will take place from 10 to 12 June .
IMA Group
Jun 1st, 2020

Upcoming event Jun. 10 and 11 will offer both personalities from the academic world and business leaders in the packaging industry, as well as IMA technology.
IMA Group
May 18th, 2020

Form, fit, and function are met with the design and selection of materials for each application.
Dynamic Conveyor
May 18th, 2020

Available in both automated and semiautomatic configurations, the system is made to fill up to 120 vials per minute.
ESS Technologies
May 15th, 2020

Designed to customer specifications, with a variety of control options, the system detects errors in colour, form, dimension, and position of contents.
Laetus
Apr 15th, 2020