In two seconds, the Surface Analyst measures the surface energy level of a film surface and determines if it is properly prepared for adhesion. 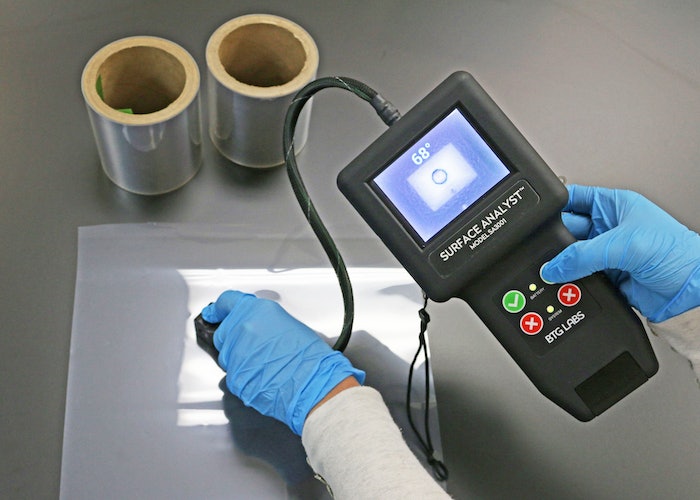 In two seconds, the Surface Analyst measures the surface energy level of a film surface and determines if it is properly prepared for adhesion.

The Surface Analyst™ from BTG Labs (formerly Brighton Technologies, LLC) is a hand-held method of inspecting flexible packaging film that reduces waste, rework and recalls that can result when poorly prepared substrate surfaces lead to printing or sealing failure.

In two seconds, the Surface Analyst measures the surface energy level of a film surface and determines if it is properly prepared for adhesion. It provides a safe, simple, accurate and nondestructive inspection instrument for manufacturers of flexible packaging, where critical film surface requirements can mean the difference between success and failure.

Ensuring the surface condition and consistency of a film is a vital component for guaranteeing success when printing or sealing a flexible package or pouch, or when printing a film label.

Dyne pens and inks have been the industry standard for inspecting film surface tension in recent years. They are used to help film users understand what their surface energy and interfacial tension measurements look like before and after surface treatment processing. One reason for their sustained use has been that they are financially inexpensive, but in recent years companies have increasingly realized that they also drawbacks.

The Surface Analyst is widely used in the film and flexible packaging industry to verify the effectiveness of corona and flame treatment. With a push of a button, the instrument quantifies the quality of the film surface. To acquire the measurement, the Surface Analyst uses patented ballistic deposition technology to deposit a highly purified drop of water on the surface of the film and measures the contact angle—a direct correlation to surface energy.

Typical inspection points within film and flexible packaging manufacturing include:

• Monitoring incoming material from suppliers: manufacturers need to have a baseline understanding of the condition of a film’s surface prior to it entering their production process. The measurements produced by the Surface Analyst give manufacturers the ability to monitor supplier specifications.

• Determining the effect of surface aging: material surfaces deteriorate over time. The Analyst determines the optimal amount of time that a surface can be kept in storage before the surface is no longer fit for adhesion.