By incorporating a robotic arm, one machine builder is bringing the benefits of pulsed light to the world of pre-filled tub sterilization for syringes, vials and cartridges. 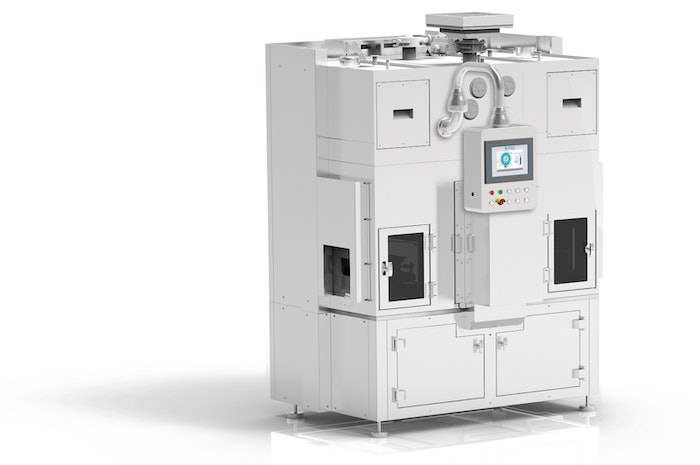 By incorporating a robotic arm, one machine builder is bringing the benefits of pulsed light to the world of pre-filled tub sterilization for syringes, vials and cartridges.

A common challenge for pre-filled container filling companies is how to transfer nested tubs to the sterile filling area without compromising the sterility of the tubs. There can be many steps involved and careful handling required by operators, which are a primary source of contamination, to make each transfer successful. In a typical operation, tubs arrive double or triple-wrapped in plastic. Personnel will remove each wrapped layer in a staging process, before unwrapping the final layer and placing the tubs at the inlet of the machine. This can consume a large amount of employee time, results in a noticeable amount of waste, such as the plastic wrappings and cleaning material that may be used during each stage of the process, and it involves the risky handling of the tubs which could result in a breach that compromises the safety of the batch.

Though Steriline knew of Claranor, developer and pioneer of industrial inline sterilization with pulsed light, they did not have a way to reach every surface of the nested syringe tubs in the tunnel. The tubs are shaped with edges that can create shadows, and at the time, it was not possible to ensure that every surface was sterilized. In the same way that you can’t paint every surface of a piece of furniture at once (since one surface is always on the floor), one panel of the tub would always remain resting on the support area of the machine where it was not reached by the pulse.

“We wanted to develop a machine but it was too difficult, requiring so many lamps,” says Federico Fumagalli, Chief Commercial Officer at Steriline. At the time, the project was dropped.

When Steriline began incorporating robotics into its machinery, Fumagalli saw an opportunity to restart the development of a pulsed light sterilizer, using a robotic arm to move the tub in a way that reached every surface.

After almost 2 years of development, Steriline created its robotic pulsed light sterilizer integrating a pulsed light unit from Claranor, with a throughput of 320 syringes/min, accommodating two 160-syringe tubs per minute.

Tubs are still traditionally provided pre-sterilized from the nested container manufacturers, but the steps and techniques to prepare the tubs for introduction into the filling process can be greatly simplified. A single-wrapped tub can be unwrapped in a clean environment, with the lid and liner covering the containers in place, as is the usual format, providing the protective sterile barrier over the containers. The lidded tub next moves from the inlet to a small pass-through chamber, and then to the isolated pulsed light sterilizer where the robotic arm’s suction cups attach to a side panel of the tub, and present the panels in front of the pulsed light unit to a sterility assurance level (SAL) of 10-6.

This process leaves only the panel being held by the suction cup to be sterilized. The arm then places the tub on the stainless steel sterilizer surface, presents the suction cups for sterilization and then attaches to one of the sterilized surfaces to present the final panel for pulsed light. With all surfaces sterilized, the arm delivers the tub to the outlet chamber of the machine. The use of robotics allows for a creative solution to the problem of how to sterilize all sides of the tub. (Editor’s note: see below for a brief video of the robotic arm's sequence in action on a display machine at interpack 2017.)

“The tubs have edges that can create shadows. We had to find the proper cycle so that all sides were exposed to the light, eliminating those shadows,” Fumagalli explains.

In each pulse, the lamps release 300 joules of energy in 0.3 milliseconds, meaning a power of one megawatt, over a complete light spectrum from infrared to ultraviolet. The process achieves a 6-log reduction (10−6), with several flashes per side. Fumagalli says, “It’s 20,000 times more powerful than sunlight.”

The lamp requires 0.2 seconds to charge back up after each pulse, and the company is working on a version that charges in 0.1 second.

The machine containment is an isolator system, itself prepared for use by a vaporized hydrogen peroxide (VHP) decontamination cycle, meaning the machine can exist in a cleanroom with lower classification, which requires less resources to maintain and operate. Steriline selected a Stäubli robotic arm because it can be decontaminated with hydrogen peroxide.

With existing E-beam and X-ray sterilization techniques, the required lead insulation results in extremely heavy machines. “Some are very large and very heavy, well over 6 tons, meaning there are limitations and potential process compromises that must be considered when determining where such a system would be installed in order to efficiently interface with the filling process. The Steriline sterilizer weighs a little bit more than 1 ton—it’s smaller and lighter – designed to fit very well and very efficiently into any process,” notes Randy Fraatz, VP of North American Operations at Steriline. The closed chamber promotes operator safety as well.

The FlexClean combines flexibility, quality and output with a modular approach. Achieving outputs of up to 180 bottles/min, the machine can accommodate different transport carriers and formats.
Jun 4th, 2019

On display at Pharmintech 2019 in Bologna, Italy, was an impressive combination of one isolator plus various filling machine modules that can be wheeled into it to deliver a great deal of flexibility to biotech and pharmaceutical companies engaged in aseptic filling.
Pat Reynolds
Apr 10th, 2019

Stericlean series that improves accuracy, efficiency and patient safety in a germ-free environment will be shown at PACK EXPO International.
Aug 22nd, 2018

Company introduces INTEGRA at PACK EXPO International 2018, a machine that integrates both an isolator and filling machine from the design process.
Aug 7th, 2018

Tailored to the requirements of the user, the STISO is modular, ergonomic and fast.
Jun 26th, 2018

The new alliance assists pharmaceutical companies with their start into the manufacturing and packaging process of transdermal dressings and oral dispersible films. The technology leaders Coatema Coating Machinery GmbH and OPTIMA life science GmbH are behind COMEDCO with their expertise in converting and coating with pharmaceutical medicines.
Jun 19th, 2018

An automatic inline capping machine designed specifically for large containers and closures, with easy changeover and speeds up to 60 containers/min.
May 4th, 2018

High-Speed Aseptic Filling and Capping in a Small Footprint

Advanced systems are designed to safeguard the operator, the product and the environment. Modularity coverage at all containment levels.
Sep 21st, 2017

Service allows for products that are not originally cleanroom-complaint to be cleaned and re-packed for better use within a cleanroom.
Jul 27th, 2017

When a pharmaceutical manufacturer could not find a machine to fit their needs, they found a collaborative and innovative partner.
Keren Sookne
Feb 22nd, 2017
Packaging/Filling

Three cleanroom chambers for pharmaceutical provide a safe working environment and can be used to increase the range of feasible tests.
Nov 11th, 2016