Prior to packaging, medical devices must be cleaned to remove particulates, oils and inorganic contaminants. It's important not to overlook the environmental, operational and patient safety factors when choosing a method of cleaning. 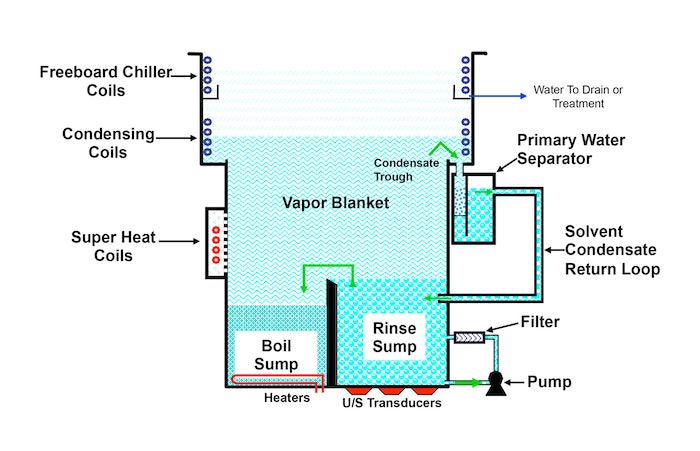 The operations of a vapor degreaser: the solvent is heated to around 40˚C in the “boil sump”which is the primary cleaning chamber. Solvent vapors (which are equivalent to steam from boiling water) rise from the boil sump and are trapped at the top of the machine. There, they cool and condense back into a liquid state. This fresh, pure condensate is used to rinse parts in the rinse sump, which overflows back into the boil sump to complete the loop. The solvent does not wear out and the system inherently recycles the solvent.

Medical devices can be complex assemblies and include intricate shapes and delicate parts, all of which makes cleaning during manufacturing particularly difficult. Despite those challenges, the requirement for perfect cleaning before packaging is unequivocal: complete removal of particulate, oils or inorganic contaminants introduced during the manufacturing processes is critical. Additionally, it is vital the parts be perfectly dry to avoid any pyrogenic activity.

Vapor degreasing is re-emerging as a popular option in the medical device industry, especially in relation to replacement of older aqueous cleaning systems. Vapor degreasing delivers the highest level of cleanliness to ensure patient safety and product performance and it generally does so at the lowest possible costs.

A few decades ago, vapor degreasing was the preferred method of cleaning medical devices because of its ease of use and reliable cleaning performance. However, in the late 1990s, environmental concerns fueled an industry-wide trend to switch from this process—which at that time used chemicals harmful to the ozone—to aqueous-based cleaning systems. Although there were disadvantages to using the aqueous cleaning systems, the environmental issues linked to many cleaning solvents at that time outweighed the benefits of vapor degreasing.

But aqueous cleaning has important considerations. The typical aqueous setup will likely be larger than a vapor degreaser of equal capacity; have complex high-pressure spray systems or mechanical agitation systems, and large heaters for the detergent baths. When dealing with delicate parts such as those in medical devices, the functionality of an aqueous system can be limited.

The process of vapor degreasing not only ensures the cleanliness of the device, but also satisfies the economic and regulatory requirements needed in medical component manufacture.

A typical vapor degreasing system consist of two chambers, both filled with solvent. In one chamber, the solvent is heated to a boil, which then generates a vapor cloud that rises to meet cooling coils. These cooling coils cause the vapors to condense and return to their liquid state. This liquid is then channeled back to the second chamber, the rinse chamber.

The dirty parts go through the vapors and into the boil sump for their first cleaning. Then they are moved into the rinse sump. The rinse sump always contains pure, clean solvent that has been distilled from the solvent vapors.

In an apples-to-apples comparison, solvents clean more effectively than water because of inherent chemical characteristics of the fluid. The high density, high Kb values, low viscosity and low surface tension of solvents, combined with their volatility, allow them to clean effectively. They dry quickly and completely, leaving no residues on parts after they exit the vapor degreaser. In recent tests for biocompatibility with major medical device makers, solvent systems have not failed in removal of contaminants.

Instinctively, water seems like it would be the more environmentally friendly option; water is cheap and “green.”

Bacteria grow in water. In contrast, solvents are inherently hostile to the growth of bacteria, which helps to manage bioburden issues in the manufacturing process, especially when components or finished devices are packaged immediately after cleaning. Even trace amounts of moisture can facilitate the growth of bacteria and create bioburden issues. This may compromise the ability to properly sterilize the device and requiring re-cleaning of the device or disposal of it altogether.

Additionally, aqueous rinsing and drying processes are much more complex than vapor degreasing. Water-systems use energy-hungry blowers, air knives and heated dryers to dry hard-to-reach nooks and crannies. Even then, spotting or corrosion of parts can be a problem if not carefully managed. In contrast, vapor degreasers deliver parts that are clean, dry and at room temperature without those large and noisy subsystems.

Aqueous cleaners also introduce large amounts of water into the manufacturing space. This leads to increased energy costs, as the building environmental systems must remove that humidity from the atmosphere.

In short, vapor degreasers offer a process that is more chemically effective at removing contaminants than aqueous systems. They do not require additional mechanical action or increased temperatures to be effective.

Managers should carefully consider all the hidden costs of aqueous cleaning:

It is important to consider all of the environmental, operational and patient safety factors when selecting a method of cleaning components in the medical device industry.

Over 50% of CPGs to increase Cobot Spending