Pharmaceutical manufacturers lag behind food and other industries when it comes to overall equipment effectiveness on their packaging lines. 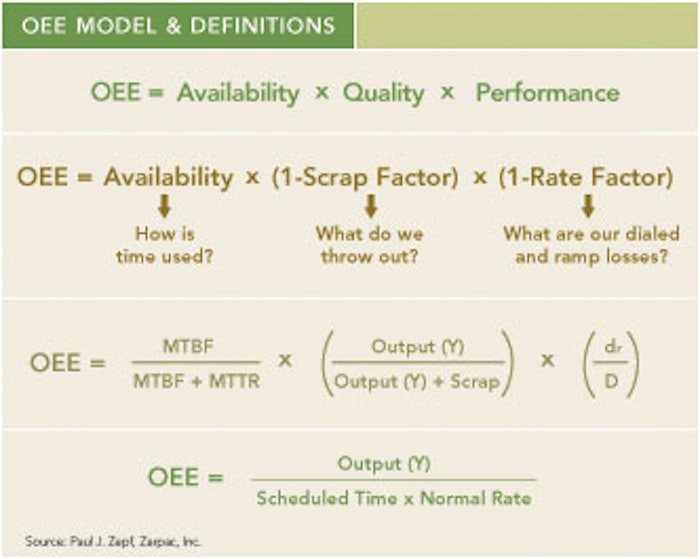 Overall Equipment Effectiveness (OEE) is a road map of sorts that can steer a company's production processes (including packaging) to greater efficiency and profitability. Yet in most North American plants, OEE averages 40% to 50% (out of a possible 100%), with “pharmaceutical firms lucky to be half that, if measured properly.”

That was the opinion shared by Paul Zepf during his presentation, “How Pharmaceutical Packaging Lines Can Increase Profitability: The Importance of OEE,” at the third Pharmaceutical Packaging Forum (PPF, www.packworld.com/ppf) held in April in Philadelphia. Zepf, M. Eng., P. Eng., CPP at Zarpac, Inc. (www.zarpac.com), has more than 36 years of packaging production experience around the globe.

Zarpac says production inconsistencies exist worldwide. “The concern,” he said, “is that we need to produce the highest-quality products at the lowest price when needed, but when I go into production facilities, I see we produce questionable products of dubious quality at the highest price whenever we can get it done, and that's unfortunate.”

Food and Drug Administration guidelines require that product manufacturers not only validate their production and packaging processes, but also demonstrate control and consistency. Yet Zepf consistently sees inconsistencies in many facilities that not only reduce efficiency and productivity, but also are not consistent with current Good Manufacturing Practices (cGMPs).

Said Zepf, “You could probably go back 50 years and have said the same thing. The lack of understanding of how we make our profits is truer today than yesterday. Many people have no idea what's happening in their production systems.”

Another problem identified by Zepf at the PPF: “The production personnel lack direction, support, discipline, authority, and accountability. And because a lot of us older guys are now retiring, there's sort of a vacuum where everybody's learning again by mistakes. So there is very little mentoring left and few skilled people to pass along the information.”

Zepf explained that for the OEE “tool” to serve as the road map to tell you how to achieve your goals, there needs to be a top-down cultural change; you need a holistic approach. “OEE is widely misunderstood and often used incorrectly,” he said. “Most people base OEE on machine availability, but it's also tied into the cost of quality, a concept that was developed during World War II. OEE is an overall picture window-view of the cost of quality. OEE looks at anything to do with an operation, including sanitization, lunches, breaks, start-ups, and meetings, all of which are part of the operative mode of that system or line. It looks at actual speed versus what speed it could run at. You can determine quality output versus scrap and determine the cost of quality. OEE lets you break your process down mathematically.”

Speed and scrap are related in that the number of products produced per minute on each of the machines on the line varies. Scrap losses have to be added in, as well as buffers. Buffers, when applied and designed correctly, modulate the output of the line and maximize uptime by keeping machines running by covering the Mean Time To Repair (MTTR) of the critical machine(s). “In my workshops, I'm always recommending that companies first fix up and maximize existing lines before they invest in another line,” said Zepf. “That way, they can put all the good habits developed on their older lines and apply them to the new line to get what they want designed into that new line.”

He believes it's good practice to determine the most critical machine on your packaging line. “For most pharmaceuticals, you can say it's the filler,” said Zepf. “The theory says to ensure that everything upstream gets product to the critical machine so that it is never starved; and therefore, downstream product must always be removed so that the critical filling machine is never blocked.”

Zepf explained that OEE involves determining the line's ramping rate divided by the normal rate. That's what OEE in packaging defines as performance. “A lot of people have strange ideas of how they use rates to get this value performance,” he said. “The line's normal speed rate (or speed determined by design to fulfill customer requirements of volume and quality within specific time constraints) may be 240 per minute. An operator may say 'Well, things aren't running too well, so I'm going to run at 220 today.' This unilateral adjustment now causes degradation. But the classic is lunchtime, where the machine or entire system goes down, purges out, and then is restarted. So what's the average number of times that a production system will go down in any given eight-hour shift?” he asked. “It's often 80 to 100 times. If you lose seven seconds or 10 seconds for every down and up, that's a lot of time. That has to be figured in there too, and that's the ramping rate.”

In looking at machine and line availability time, factor in both planned and unplanned events. He said, “Planned downtime is that time in which management dictates operative processes that yield no output. It goes right down to specifics, such as if you bought a machine that has to change a film roll. If there is no auto-splice, then changing the film roll is planned downtime, as are lunches, breaks, changeovers, meetings, etcetera. Unplanned is anything that you have no control over or are unexpected events.”

Availability on a line is best determined by factoring the actual engineering definition of uptime and downtime: Mean Time Between Failure (MTBF) divided by MTBF plus MTTR.

“When I go into a lot of plants, the first thing that they tell me is to fix the machines,” Zepf told the PPF audience. “If you're at less than 50-percent OEE, you don't start at the machines. Look at quality issues, particularly scrap. Rework is part of this. Trash from when you have a failure in a machine and the machine is shut down is one event where workers are in a hurry to fix the problem and get the line back up and running. So they're not too selective. They'll grab a whole bunch of product and dump it all. Studies have indicated that if you examine what they dumped, 50 percent to 70 percent of it is good product, but because they're in a hurry, it becomes scrap. If you do that maybe 40 or 50 times a shift, how much good product did you throw away?”

“The target should be around 85 percent. There's a reason for the [food/pharmaceutical discrepancy]. I can understand some of their [pharmaceutical] problems, but a lot of them, as it was told to me a few years ago, are related to economics. I was told that some pharmaceutical firms said they knew it would only cost a couple of thousand dollars to fix a problem, and that investment could save $50,000 to $75,000 a year, but the product on that pallet over there is worth 2 million dollars. What incentive do I have to spend a couple thousand to gain $50,000?”

A PPF audience member asked if Zepf had any recommendations to get management on board to adopt OEE. “That's a tough nut,” Zepf admitted. “Back in the '50s and '60s you couldn't fool the president or the CEO because he knew how things worked. Nowadays they only look at numbers, so the only way to get their attention is if you actually do OEE correctly and can provide numbers that have an economic impact. Then they'll ask, 'Why haven't we done this?' Well, because we haven't gotten approval yet. 'Well, here's the money, get that done' may be their response.”

Zepf expressed concern that engineers are poor in presenting their case and presenting a justification. “OEE is a tool that you can use to quantify certain things that enable you to present your case and sell it to upper management,” he said.

One final concern Zepf shared with this editor: What happens when the economy rebounds and there's less incentive to employ OEE?