Drug Counterfeiting Comes to the U.S.

API (Active pharmaceutical ingredient) smuggled in this country from China, India and Pakistan is manufactured into pills and are “pre-positioned” for sale and distribution. 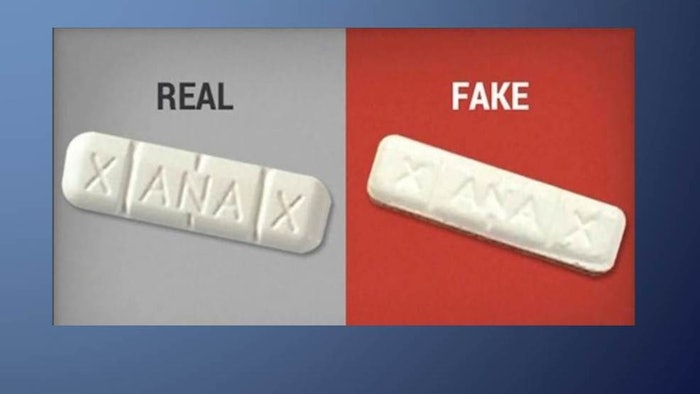 Interdiction efforts at the border have been successful. So much so that counterfeiters have shifted strategy. A cheap pill press, colored binding ingredient (sold legally here), some tool and die sets to press brand name and numbers on the pills, as well as some sophisticated packaging materials—that is all that is needed to set up a counterfeiting operation right here in the good ole’ U.S.A.

Found on the dark web, the online pharmacy website might be located in the Netherlands where strict internet privacy policies thwart detection efforts. Typically, the drugs offered are those that can be abused (Xanax) or used for erectile dysfunction.

Once you order, your payment might be processed in Eastern Europe. Someone in the Phillipines calls to confirm you are not a robot or law enforcement. Finally, your order is shipped by common carrier from within the U.S.

How does the counterfeit API get in the country? A variety of hard-to-detect ways. Some was recently discovered disguised as powered drink mix. Once inside the U.S. it is far easier to operate under the radar. So rather than try to smuggle counterfeit drugs across the border, today’s counterfeiters only need the main component smuggled in, and they source the rest of their operation here.

The bad guys counterfeit drugs not because they are the most expensive, they focus on products with a large market share and heavy volume.

Even Chapstick was knocked off in Long Island’s Nassau County. Distributed by less than reputable wholesalers and sold mostly to gas stations and convenience stores. Chapstick on a counter loose in a big bowl is usually a good sign the product is not the original which would be packed in a blister. The tubes looked pretty good, but the sunscreen ingredient had not been added to the formula.

The fake Chapstick had been turning up all over the tri-state area, sent back from consumers unhappy with product look and performance. The operation was discovered after a fire broke out in the production facility (the heat source for melting and forming wax sticks). Ultimately ten tractor trailers of fake product were confiscated. It was pure luck the operation was discovered due to the fire. Real lot numbers were used, and the counterfeiters even tried to copy some covert markings.

But a lot of busts don’t come by accident as law enforcement and industry work together to set up elaborate undercover operations to meet bad actors on the dark web and eventually set up face-to-face meetings with the culprits. Often other drugs like cocaine and heroin are confiscated along with the fake pharmaceuticals at time of arrest.

China makes the best counterfeits, says Donnelly. But they are usually produced in filthy surroundings with no regard to safety or clean manufacturing. Donnelly reports the Chinese government is surprisingly helpful with U.S. anti-counterfeiting operations.

For illegal operations here in the U.S., authorities seek to catch the one person at the most sophisticated level of the organization—usually a chemist at the very top of the chain.

It is relatively cheap to produce pills, and even with only a small table press a counterfeit operation may turn out 50,000 pills a month. Margins are huge and there is a lot of money to be made. And some operations move a high volume of product. One sting operation uncovered a 20,000 plus square foot warehouse filled with packaging materials. “Lots of materials,” says Donnelly, “must have been a high volume of product.”

Lenient laws in both U.S. and Canada do not deter counterfeiting efforts.

Because both Viagra and Cialis are targets for counterfeiters, Lilly and Pfizer work together to hunt down bad actors. Law enforcement officials like this coalition approach rather than being seen as serving one manufacturer’s anti-counterfeiting efforts.