The common medical device sterilization method requires optimization, particularly with potential regulatory changes on the horizon. Emissions limits could become more stringent by as much as 90% per one technical affairs VP.

Ethylene oxide sterilization is a commonly used method for sterilizing medical devices. It’s made headlines for concerns over environmental effects and while the FDA has encouraged industry to develop new approaches, a singular, comparable alternative sterilization method has not yet emerged.

“The FDA is closely monitoring the supply chain effects of closures and potential closures of certain facilities that use ethylene oxide to sterilize medical devices prior to their use. The Agency is concerned about the future availability of sterile medical devices and the potential for medical device shortages that might impact patient care.” -FDA.gov Ethylene Oxide Sterilization Facility Updates

Clark Houghtling, vice president of business development & technical affairs for Cosmed Group, Inc. spoke at the virtual Medical Packaging Conference about why the method is so versatile, and what practices factor into worker, patient, and environmental safety when using the process.

Ethylene oxide (also referred to as “EtO” or “EO”) is a simple chemical compound, C₂H₄O. “It was discovered in 1859, so we've known about ethylene oxide for a very long time. In the late 1950s, a gentlemen named McDonald patented a process for processing medical devices with ethylene oxide,” explained Houghtling.

It’s currently the most widely used method for industrial medical device sterilization covering about 52% of the market, due in no small part to the fact that it can be used for almost all medical devices without deleterious effects. Exceptions include non-vented packaging because EtO is a gas that must be vented, and liquids (as gas will not pass through a liquid).

EtO is highly effective against microbes—bacteria, viruses, yeast, or molds—and diffusive. “It can even go through some plastics that are sealed airtight,” he said. “It's compatible with a very wide variety of devices and packaging materials. Another important advantage that can be overlooked is that devices can be re-sterilized with ethylene oxide, which can’t be done with some other sterilization methods, such as gamma irradiation, electron beam, x-ray, or high-temperature steam.”

EtO has four variables that can be altered to produce a desired result—temperature, humidity, gas concentration, and gas exposure time—which offers more customization than sterilization methods that offer a single variable, the delivered dose.

OSHA sets limits for EtO exposure in the workplace:

Houghtling noted some of the factors that can help keep exposure below these limits: device design so that it aerates more quickly inside the chamber and during the aeration process, and breathable packaging and larger packaging surface area so that it is easier for EtO to get into and out of the product. Facility design plays an important role with proper airflow, scrubbers, and abators that minimize workers’ exposure.

“Also becoming increasingly more important these days are optimized and sustainable cycles. Where feasible, using an all-in-one process means all the phases of sterilization can be done inside the chamber, which includes the preconditioning or conditioning, the sterilization itself, and most importantly, the aeration,” Houghtling said. “It’s important to do a very thorough aeration on the product before it comes out into the warehouse to avoid any worker exposure.”

For patient safety, factors to consider to reduce lethality include:

EtO residues must comply with government guidelines before being released to the marketplace. There are two components of EtO—the ethylene oxide itself and a byproduct, ethylene chlorohydrin—and delivered doses of both must meet certain limits. Design factors important for residues are similar to those listed above for lethality, but Houghtling noted to make sure the residues are reduced to as low as possible, as quickly as possible.

There is a considerable amount of focus on the environmental safety of EtO and that has led to short supply of contract EtO sterilization capacity. EtO emissions must meet U.S. federal and state limits, while other countries have their own particular limits. “There are existing limits for EtO emissions, but these emissions are probably going to be severely limited in the future and could be as much as 90% more stringent than they are now. We have to make sure that we're good environmental neighbors because safety is paramount for the environment,” he noted. 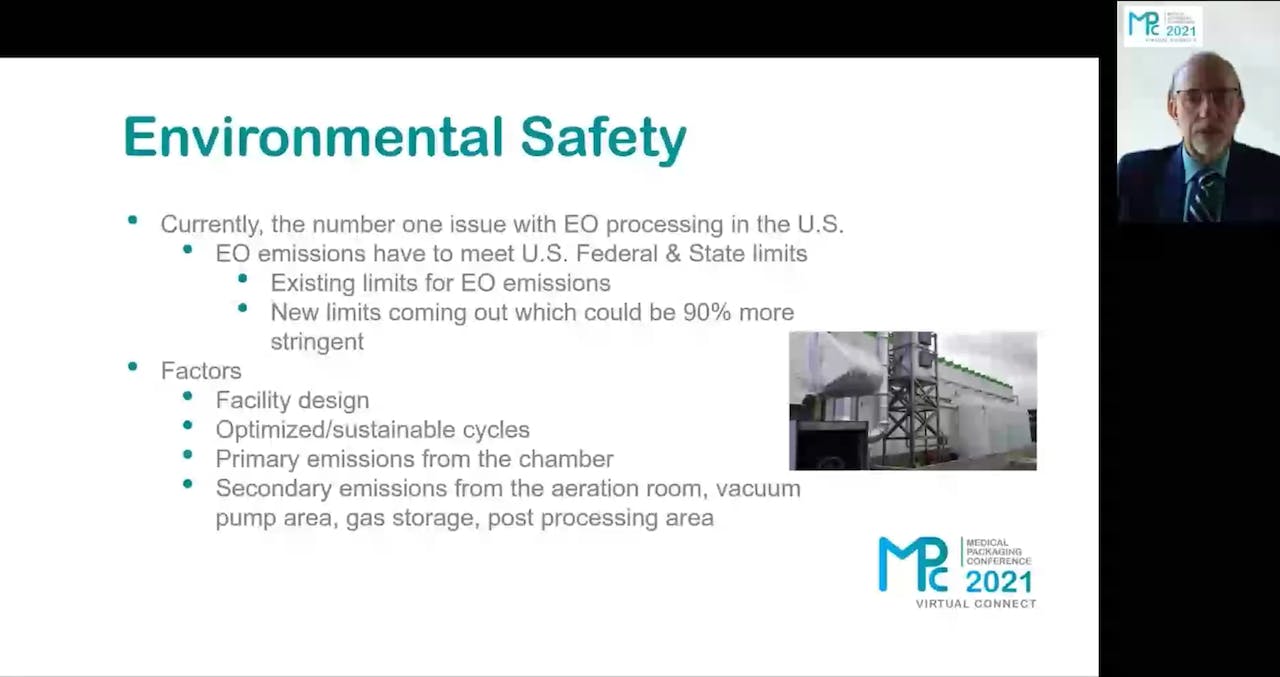 Factors that are critical for this are the facility design, ensuring all fugitive emissions are captured through a scrubber or abator system to reduce the amount of EtO released to the atmosphere. Cycles should be optimized, as it’s more sustainable to limit the amount of EtO to what is truly necessary and avoid “overkill” processes. “You must capture the primary emissions from the sterilizer chamber, which is a bit easier to do because there are high amounts of EtO in a small volume, but we also have to be very critical about the secondary emissions that can come from spaces like the aeration room, vacuum pump area, gas storage area, post-processing areas, and others, and make sure that those are all thoroughly scrubbed through some type of a maintenance system to make sure we're meeting” or coming in under the limits, Houghtling explained.

Being safety and resource conscious is not only the right thing to do. In this case, it boosts business health, as well. Optimizing EtO cycles to use efficient amounts of gas results in faster processing times with more rapid EtO dissipation, which Houghtling pointed out can be the longest lead time in the process. Becoming more efficient with sterilization can also lead to reduced inventory, improved cashflow, and overall reduction in costs.

Houghtling said he’s often asked about the future of ethylene oxide, given all the concerns he discussed at the MPC event.  He posited that because it is the top sterilization method for heat-sensitive products, its use will be continued. “There is no other low-temperature gas that has the ability to do what ethylene oxide can do, primarily because of three limits of all other low temperature gases: they have trouble in some cases with material compatibility, with penetration, and with scalability,” he explained. “Sustainability is key now and will be even more so going forward. We need to use less ethylene oxide and not a gross amount more than is actually needed, which will help minimize the EtO emissions.”

This acceptance comes at an especially critical time for the FDA to continue our important work to mitigate ethylene oxide sterilized device shortages.

The FDA will continue in its efforts to reduce over-reliance on ethylene oxide for medical device sterilization and will provide updates on future Master File acceptances.