Benefitting global industries, not the interest of individual countries, is part of the focus of ASTM's event in Praque, Czech Republic. New developments include a climatic stress package test. 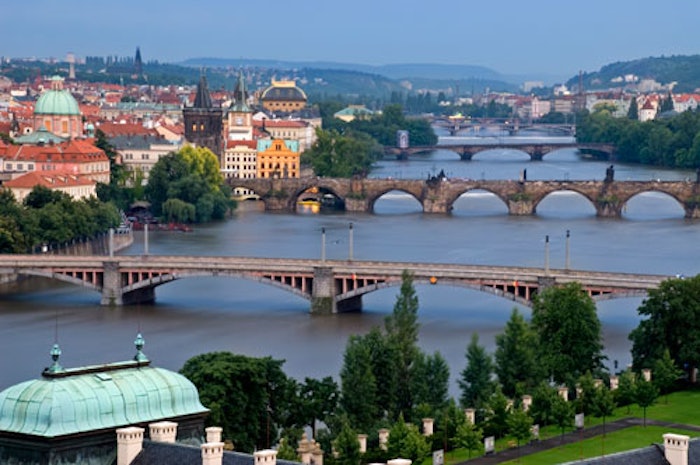 ASTM Intl. typically has been thought of as an organization that develops standards only for United States-based industries and commerce. This has never been the case, but since the ASTM acronym previously stood for the 'American' Society for Testing and Materials, it has been perceived as an association that just writes standards for the U.S. The 2001 addition of 'International' to the association's name has broadened the scope of the organization to the marketplace.

From Oct. 5 - 9, 2009, ASTM Committee F02 on Flexible Barrier Packaging held a workshop along with their regular committee meeting in Praque, Czech Republic. It was well attended both by U.S. F02 committee members (18), and by European workshop attendees (23), exceeding our expectations. Besides discussing some of the technical aspects of the standards for medical device packaging, conducting the meeting at a European venue helped promote the use of ASTM Intl. standards in Europe.

Many ASTM standards have been used internationally. ASTM is trying to promote the participation of more international experts in the standards writing process. The ASTM process of writing standards is significantly different than the CEN or ISO process whereby member countries work on standards and vote for approval as a member country.

ASTM is made up of individual company members that may develop and vote on standards as individual companies. A consensus of the "industry" is obtained, as opposed to a consensus of countries when approving standards for publication. Consequently, if ASTM wishes to be a global contributor to standards development, it is valuable to obtain global participation. Standards developed in the ASTM manner may also develop standards that represent the best interests of global industries, not the interests of countries, thus breaking down trade barriers.

Another benefit of conducting the ASTM Committee F2 meeting in Prague was the opportunity to demonstrate to the "guests" from Europe the standards development and approval process in real time. This was not just a symposium for discussing the technical aspects of medical device package testing, but it also included working sessions whereby standards were being written or revised, and debated and discussed. These working group sessions covered such topics as peel testing (F88), dye leak testing (1929), and several other standards being revised.

The process of handling negative votes was also shown as one standard under review received a negative vote from an ASTM member. A negative vote is a vote cast by a member who disagrees with something in the document. The "negative" prevents the document from moving forward to final approval. The negative must be resolved by either convincing the voter to withdraw his or her ballot through clarification, or through some future action on the document; or the committee can find the voters argument non-persuasive by a ballot of the committee members.

One aspect that makes ASTM standards of the highest quality is the requirement that test methods have an interlaboratory study (ILS) performed so that a precision and bias statement can be included in the final approved document. The meeting in Prague encouraged European participation in the ILS process.

Additional committee business was conducted during the meeting, including the development of a standard test method for the peel adhesion of lids from containers (cups). Revisions to the F1929 Standard Test Method for Detecting Seal Leaks in Porous Medical Packaging by Dye Penetration include methods for using a “dip” procedure as well as an eye-dropper procedure.

Another new method for dye testing nonporous packages is in development. A significant new standard is under early stage development that will provide a guide for testing packages to climatic stress. This guide could be used for choosing test conditions and stresses to be used as part of an over-all package validation protocol.

-By Pat Nolan, COO of DDL

He has 27-plus years of experience in the testing and analysis of packaging and products for shock and vibration hazards inherent in the distribution system. Nolan serves the package testing industry as Chairman for the ASTM committee D-10 on Packaging and is also a member of the AAMI committee to draft a Technical Information Report (TIR), which identifies 11607 compliance regulation guidelines.
Companies in this article