In total, the companies are aiming to produce millions of tests per week. “We are grateful to the FDA for accelerating the process to grant Emergency Use Authorization for this test,” said Matt Sause, President and CEO of Roche Diagnostics North America. 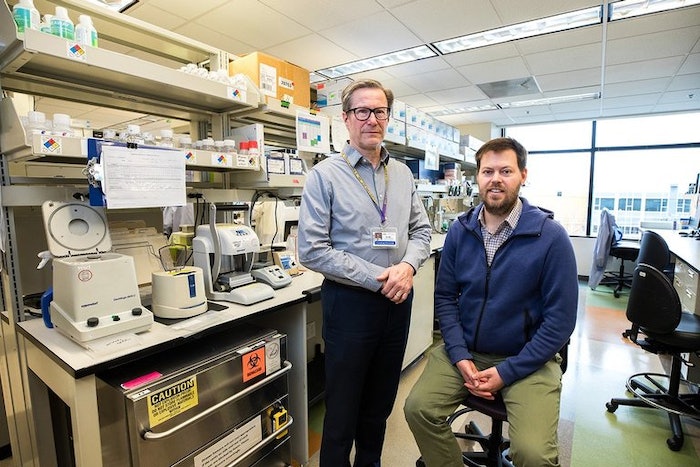 Dr. Keith Jerome (left), Director of the UW Medicine Virology laboratory in Seattle, and Dr. Alex Greninger, Assistant Director of the lab, quickly ramped up a test to detect the novel coronavirus, SARS-CoV-2. As of March 11, their lab had performed nearly 3,000 tests ― with nearly 270 found to be positive.
Dan DeLong for Kaiser Health News

[Editor’s Note: News regarding COVID-19 is changing frequently. Healthcare Packaging is proud to report on developments in the diagnostic manufacturing and packaging space. While we are sensitive to the global plight of this pandemic, we do not offer medical or testing advice.]

Diagnostics are a critical part of slowing pandemic spread, but as COVID-19 cases increased across the U.S., healthcare providers were left without access to enough (or any) tests. Sick patients concerned about previous exposure due to travel were turned away due to lack of tests and people took to Twitter to share their stories of runaround between primary care physicians and departments of public health.

The tests that the CDC provided were hampered by a number of issues as reported by Bloomberg, including lack of quantity, slow test speed due to manual methods, and issues with reagents not performing consistently. Some medical centers didn’t qualify to receive the tests that state and local health labs had.

This is changing as two companies have been granted Emergency Use Authorization (EUA) from the FDA and have begun shipping test kits.

Aiming for millions of tests per week

Roche’s global emergency team, which monitors viruses, began work on its test in January at its Pleasanton, CA, site when they obtained the coronavirus’ genetic sequence published by researchers. They also obtained a viral sample from a patient in Washington state. “We started very early because we knew it would increase exponentially,” Schinecker said to Bloomberg. “It was clear.”

While Roche and Thermo Fisher ramp up large-scale testing efforts, researchers at medical schools across the country made early progress as well and fought for the ability to make use of it.

Dr. Keith Jerome and Dr. Alex Greninger, both from the University of Washington (UW) School of Medicine, “have overseen the rollout of more than 4,000 tests, painstaking work that has confirmed the infection in hundreds of patients across the nation,” according to a spotlight in the Seattle Times.

In their 10,000 sq ft virology lab near Seattle, they began developing a test after reports of the mysterious illness in China came out in December. Greninger, along with approximately 100 colleagues from across the country, wrote an appeal letter in February to members of Congress noting that no tests from manufacturers or clinical labs had been cleared at that point and that tests could be run but were not allowed because of the FDA’s rigid clearance process.

Per the Seattle Times, “As the public health emergency mushroomed, [Greninger] and Jerome took advantage of a regulatory loophole that allowed them to test samples obtained for research purposes from UW’s hospitals.”

Additionally, credit must be given to Dr. Helen Y. Chu, Director of a flu study in Seattle, for identifying the virus' presence in Washington. Dr. Chu is a physician at UW Medicine, while holding UW professor positions in infectious diseases and epidemiology. She sought to alter her lab's flu testing to test for existence of coronavirus in her state, but was turned down by the federal government. Dr. Chu and her team went forward with testing without approval in late February, and discovered a positive result in a teen who had not traveled. She placed public health over potential career consequences.  For more from Dr. Chu, visit the podcast: Why the U.S. Wasn't Ready for the Coronavirus.

“She’s a true American hero, [who] actually broke this epidemic identified in Washington state when no one else wanted her to test for the virus,” said Harvard Chan School of Public Health Epidemiologist Dr. Eric Ding on KIRO Radio’s Gee and Ursula Show.

Hospitals Use AI to Diagnose Coronavirus

Coronavirus Could Cause Drug Shortages

Skipping vacation this week? Using your free time to brush up on what you missed? From reshoring and machine safety to robotics and optimizing inspection with AI, here are seven articles and podcasts highlighting what's new.
Keren Sookne
Aug 3rd, 2021
More in Machinery & materials