A nine-month study at Beijing's Union Medical College Hospital tested 15 drugs in polyvinyl chloride (PVC) bags, glass bottles, and polyolefin bags to determine the sorption of those materials into drugs used for IV/transfusions.

The test, completed in 2003, was conducted after previous studies reported the loss of certain drugs from aqueous solutions stored in plastic bags for various periods. These losses were generally attributed to interactions, such as sorption, between the drug and the plastic. The losses could reduce drug delivery to the patient and, in some cases, diminished therapeutic effect.

The results: five products showed a loss of potency when stored in PVC bags; two showed a loss of potency in glass bottles. Insignificant losses were seen with Cryovac's M312 polyolefin bags. (Cryovac sponsored the study.) To learn more, Healthcare Packaging exchanged e-mails with Li Dakui, director of the hospital's Pharmacy Department. Dakui advises the hospital on the selection and purchase of packaging materials used for transfusions during surgical operations.

Through a translator, Dakui explained: "In recent years, the main [packages] used for IV products in our hospital were glass bottles [60%] and non-PVC bags [40%]" from a different vendor. He noted that the packaging material decision requires a "balance between quality and price."

So what do these findings mean? "The trend of packaging materials, equipment, and products for transfusions in the next one to two years [points to an] increase in the application of non-PVC materials," said Dakui.

He noted that testing for another 15 drugs began earlier this year at Beijing Railway Hospital, with Union Medical College Hospital personnel guiding the test and checking the results.

Last month, the Food and Drug Administration announced a series of educational workshops on current Good Manufacturing Practice (cGMP) to be held in collaboration with the Intl. Society of Pharmaceutical Engineers (ISPE) and Peking University in Beijing. Workshops will be held Dec. 5-7, 2005, and April 24-26, 2006, at the Ying Jie Convention Center in Beijing. For more details, visit the FDA posting.
Related Stories 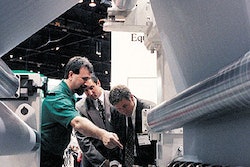