A Software Supplement for OEE, Engagement 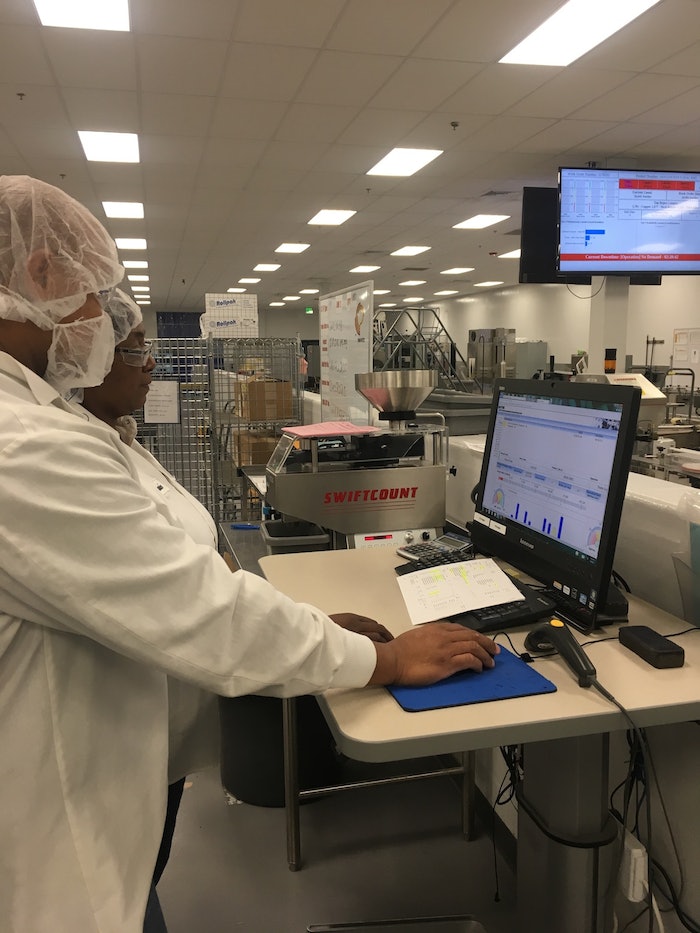 Pharmavite, a California-based nutraceutical company, produces Nature Made vitamins and supplements, the top-selling national vitamin and supplement brand in traditional retail outlets. With more than 540 products and rapidly growing customer demand—coupled with complex manufacturing and packaging processes—the management team at Pharmavite needed to streamline operations and get more capacity from their existing assets.

The company had first been using Microsoft Word and ERP entry forms to track uptime performance, then moved to an Excel based OEE tracking system. These solutions were neither real-time nor capable of capturing detailed downtime information. Though the system did finally establish necessary Key Performance Indicator (KPI) goals, they were difficult to maintain, often resulting in miscalculations and extended time in verifying results.

“Under that system, what was recorded often depended on who was recording the information, and what they wanted to record,” says Dan Burkett, Manager, Factory Automation. “When the method of recording the information is subjective and varies from employee to employee, then the way it is ultimately used to make improvements throughout the business is also subjective, not uniform.”

Need to upgrade
Pharmavite recognized that it needed to find and implement a better system to calculate OEE. This would allow the company then to see what was happening on the shop floor, react accordingly, and cross reference across historical data. Management could then mix and match uniformly recorded pieces of information—instead of finding themselves comparing apples to oranges—to get a true picture of what was going on in one area versus another.

Pharmavite’s managers and executives also recognized that they needed a software solution that would support and extend their commitment to lean manufacturing and continuous improvement methodologies. Finally, there was a strong preference to avoid systems that would necessitate corresponding infrastructure investments, like new PLCs in existing machines or other additional measures.

“We created user requirements for the business, they described what we needed to have for the system to calculate our OEE for us,” Burkett says. “It needed to be real-time, objective, and able to provide the information simply and easily to our end users. It also needed to allow us to accurately use the information to create a representative picture of what was going on in the shop floor, without actually being on the shop floor.”

Solution selected
“There were several systems that we considered and put through their paces. We ultimately ended up selecting Parsec’s TrakSYS™ manufacturing operations management software platform because it was capable of providing us exactly what we needed for improving OEE within the business while being cost effective.”

TrakSYS is an integrated software platform that contains all of the functionality of a full Manufacturing Execution System (MES) in a single package. The modular, scalable nature of TrakSYS brings the flexibility to deploy only the functions that are required, and add new functions as needed, without a major software upgrade. When TrakSYS was first identified, Pharmavite initially launched a pilot on two lines at its top packaging site in Valencia, CA. The focus was on OEE, downtime, rejects, and other key performance metrics.

The pilot program used 55-in overhead display screens above each packaging line for real-time visibility, and operator interaction was facilitated using entry screens at each workstation. Best practices were used to minimize implementation time and maximize cost savings, not only in the pilot, but in such a way as to later facilitate the rollout of the solution to other lines in packaging as well as manufacturing.

“Plus, we didn’t have to initially make any changes to our PLC components or machine controls,” Burkett says. “We took the existing machines and integrated those fairly seamlessly with the TrakSYS software using its OPC-compliant capability.”

Having passed the test, the solution was then expanded to multiple sites using a standardized deployment methodology in a phased approach. Now, from a management and OEE perspective, TrakSYS is firmly embedded in all three of Pharmavite’s locations. It is fully implemented at two out of the three sites—one packaging, one manufacturing—with a slightly slower rollout on the third, a packaging and manufacturing combination site.

Pharmavite’s TrakSYS solution is now connected to processing equipment via standard PLC integration at all of the various stages of production—from the tablet press, to encapsulators, coaters and, ultimately, packaging equipment—giving operators and managers real-time visibility into the entire operation. And with integrated alerts, notifications, tasks, and journaling, TrakSYS allows users to take action and close the loop in real time on issues affecting production speed and quality. TrakSYS was also connected with the company’s ERP, for real-time planning and scheduling of manufacturing operations.

“It really is employee-driven. There are overhead screens everywhere, so the operators are constantly interacting with the software to provide feedback. We’re recording more information on what’s happening on the shop floor, we’re updating work orders, part numbers, and downtime codes in real time on the shop floor, with little or no interaction with any supervisors or managers,” Burkett says.

One of the things that Burkett says attracted him to Pharmavite was the passion that the people on the shop floor had for the business. He is of the opinion that TrakSYS software reinforces that. Operators know that they’re ultimately responsible for the information that comes through on their shift, so they want to make sure that information is not only correct, but also helps the business to make quality products.

Putting the data to work
“Once we were pretty well implemented, probably the first step we took was getting the data in front of our continuous improvement teams,” Burkett says. “Those teams are actually taking this information and dissecting it so they can take the objectively collected information, and understand what’s going on with the process on many different levels so they can go out and make appropriate changes. OEE improvement was a combination of the operator transparency piece, plus the ability of our continuous improvement teams to go through and understand the data, diagnose what was really happening, and then develop improvement plans.”

Bottom line results
Ultimately, achieving OEE improvement was the top priority in the implementation, and the TrakSYS solution helped to focus on the throughput goal. With manufacturing and packaging root cause analysis data more readily available, Pharmavite is able to more easily understand losses and impacts in those areas of the value stream. These insights have helped Pharmavite improve OEE by more than 20 percentage points since implementing the software. And creating capacity from existing assets improved margin and return on invested capital, while deferring new capital expenditures.

“We were looking for OEE calculations for the business, and you can’t do that manually when you are trying to cross reference one shift to the next, one work order to the next,” Burkett says. “Consider a product code ran three weeks ago and also ran today. We wanted to understand what improvements were made between then and now by comparing the information from three weeks ago to current information, and seeing how that impacted OEE. That was very difficult to understand and very cumbersome to calculate. Before, we were doing it just by day or by shift; now we can do all that, but we’re also able to look back days, weeks, years, or we can look at specific work orders or specific part numbers to calculate that OEE and understand what changes we were making with our production processes, improvements that we were making, and how that directly affected OEE.”

Valuable OEE resources
Comprised of directors and senior managers of continuous improvement, asset reliability and industrial engineering, OpX’s Operational Reliability Solutions Group, convened by PMMI, focuses on ways to improve the reliability of making shippable product, when you want it, and at the pace you need it. Download the group’s resources, which include an OEE benefits calculator, an OEE starter tool, an OEE guideline document, and more, for free.