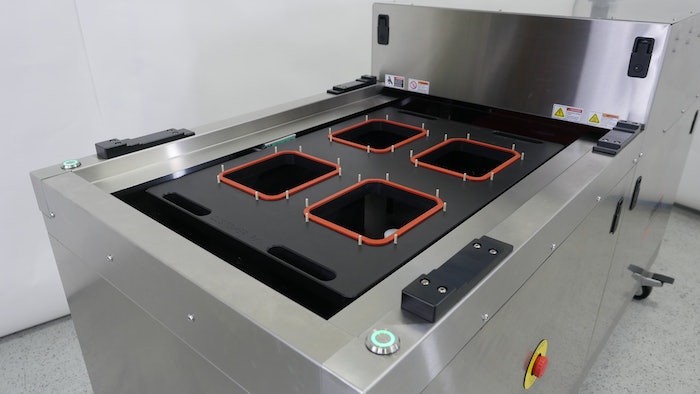 To meet these needs, Belco Packaging Systems introduced its BM2030-PC Medical Tray Sealer at PACK EXPO Las Vegas in Sep. 2019. Awarded with a PMMI Technology Excellence Award at the show for new innovation, the system is designed for consistency and repeatability, producing high quality seals for FDA-monitored operations such as implantable device packaging.

Based in Monrovia, CA, Belco has served the manufacturing industry for over 60 years. The company explains that the BM2030-PC represents customer feedback and wishes collected over 45 years of manufacturing medical tray sealers.

“The system is designed for customers in FDA-regulated environments who need the machine-generated evidence that they’re complying with their quality management system,” explains Belco Vice President Tom Misik. “The machine will let you know if something is not working right. When it is functioning properly, it will provide the data for the MDM [medical device manufacturer] to upload into their permanent device record.”

The system offers speed and control, thanks to two Festo belt driven linear actuators, a Beckhoff industrial panel PC and several other features for safety and ease of use. One of the hallmarks of Belco designs is “No ifs, ands or bolts.” The machine is built with a welded structural steel foundation, robust for avoiding metal distortion or warping in heat sealing operations that combine high temperature and pressure.

To seal the trays, the operator places pre-made thermoformed trays in each of the machine’s precision-machined seal fixture cavities with a die-cut Tyvek, laminate or foil lid on top of each. With the touch of its Single Start Button, the cycle is initiated. The shuttle drawer slides in and the custom-engineered seal fixture contacts the stationary heat platen for the predetermined cycle time to heat seal the trays. To see the machine in action, visit: http://hcpgo.to/357

After the shuttle drawer slides back out, the patented automatic tray ejector elevates the trays up and out of the cavity, so that the operator doesn’t disturb the still-warm seal when removing the trays.

When Belco set out to improve shuttle performance for the new sealer, they selected Festo’s ELGA series belt driven linear actuator which is designed for use in food and cleanroom environments, offering controlled linear motion at quiet speed and improved performance.  “It was engineered to allow the shuttle drawer to move smoother at higher speeds than we could with our old linear actuator,” says Tom Volby, R&D Project Engineer at Belco, in a company video. Misik adds that this design represents a significant improvement in the availability (lead time) of this linear actuator over previous components they’ve used.

With the shuttle speed increased, Belco set its sights on the tray ejection rate. Volby adds, “It made sense for us to improve the speed of the product ejector. Festo came in with a guided linear actuator that had a right-angle motor that was much quicker and had fewer components that would mount directly into the machine, and it was capable of lifting or ejecting any load that the machine would possibly see.”

The seal fixtures are custom-engineered and machined as precision tools for each MDM’s components. Because of the fixture’s size and weight, Belco opted to automatically raise the seal fixture out of the machine to make it easier for operators to install or remove the fixture. The height is also helpful for removing trays after sealing.

Advanced controls for speed and ease of use

Operations are fast thanks to the EtherCAT high speed Ethernet communication and Beckhoff’s Windows 10 embedded Process Controller. Belco notes that process alarms for time, temperature, and pressure monitoring functions are handled by separate terminals within the system’s EtherCAT network.

The machine was designed so that operators can easily access control, power, and utility components when needed.

The machine features a built-in RFID antenna, and every tool is also produced with an RFID tag—every seal fixture is identified using RFID prior to allowing a cycle to run. “We've been using RFID technology for a while,” says Misik. “We need to verify every time we cycle the machine that the validated process parameters of time, temperature and pressure are only being used for that tool. That’s what gives the customer confidence that their machine is performing to their quality requirements.”

“The advantage we’re introducing now is that we’ve moved the RFID reader to the top edge of the tool,” says Greg Fox, Project Engineer, Medical. The centralized placement of the RFID tag on the upper tool edge allows seal fixtures of varying length to take advantage of this identification feature without requiring increased top plate size. The result is a faster response time with a minimum amount of potential for interference or misreads.

EtherCAT and Ethernet protocols integrated into the control system allow for easy integration of bar code scanners and vision systems.

The BM2030-PC features a unique light curtain that is placed at the front edge of the tool area, that projects the safety curtain through the seal area to a receiver mounted on the back side of the seal chamber. “Belco added this to be able to detect whether someone’s placed their hand in an unsafe area in the moving zone of the machine, but it’s also able to detect if a package has been unintentionally introduced into the machine and gotten stuck onto the heater platen,” says Fox.

“Safety is a primary concern,” explains Misik. “The light curtain has given us the flexibility to pursue the new design. It’s also given us safety support tools, not just for the operator, but also for the customer’s product.

“If something happened with the materials, and a package became hung up in the machine, rather than the machine continuing to cycle, it would recognize there was a jam, shut down, and the operator could carefully remove the device. The devices could be several thousands of dollars, and in the case of a tissue bank, the product may be priceless as it’s a human tissue.”

A recently developed process has allowed the premium option for pharmaceutical packaging to achieve an important new milestone.
Honeywell Performance Materials and Technologies (PMT)
May 23rd, 2022