A supply chain security and resilience director takes a look at recent trends from 2019 and 2020, and talks COVID-19 product security.

In addition to consulting, auditing, and standards, BSI offers a Supply Chain Risk Exposure Evaluation Network (SCREEN) intelligence tool and its Supplier Compliance Manager (SCM) tool that tracks and mitigates threats to operations, and tracks the progress of supplier risk and compliance audit programs. Pelli offered statistics gleaned from the SCREEN tool, including:

1. Pharmaceutical cargo thefts account for a relatively low proportion of all cargo theft at 2.9%. The top commodities stolen are food & beverage, electronics, and alcohol and tobacco, with pharmaceuticals ranking at the 11th spot for overall theft. Lower value shipments such as food do not have the same security measures and are less complicated to move.

2. In 2019, pharma theft tended to happen most often via hijacking—accounting for over 40% of thefts—and facility break-ins. With such high value cargo, smaller incidents perpetrated by smash and grab, employee theft, and theft of container/trailer are less likely than in consumer goods and automotive industries.

3. The median value of a pharma theft is $100,000. Pelli said, “Even the smaller pharma thefts are larger than the typical thefts in other industries,” including food and apparel. “When pharmaceutical thefts happen, they tend to be big… an entire truck, a facility break-in.” Pelli advised attendees to focus less on the number of incidents but more on the potential impact of those incidents.

4. The top countries where thefts occur varies quite a bit from year to year. Brazil, Mexico, and the U.S. were the top three countries for pharma cargo theft in 2019. Recently, Italy has bubbled up as more of a hot spot, as well as India. 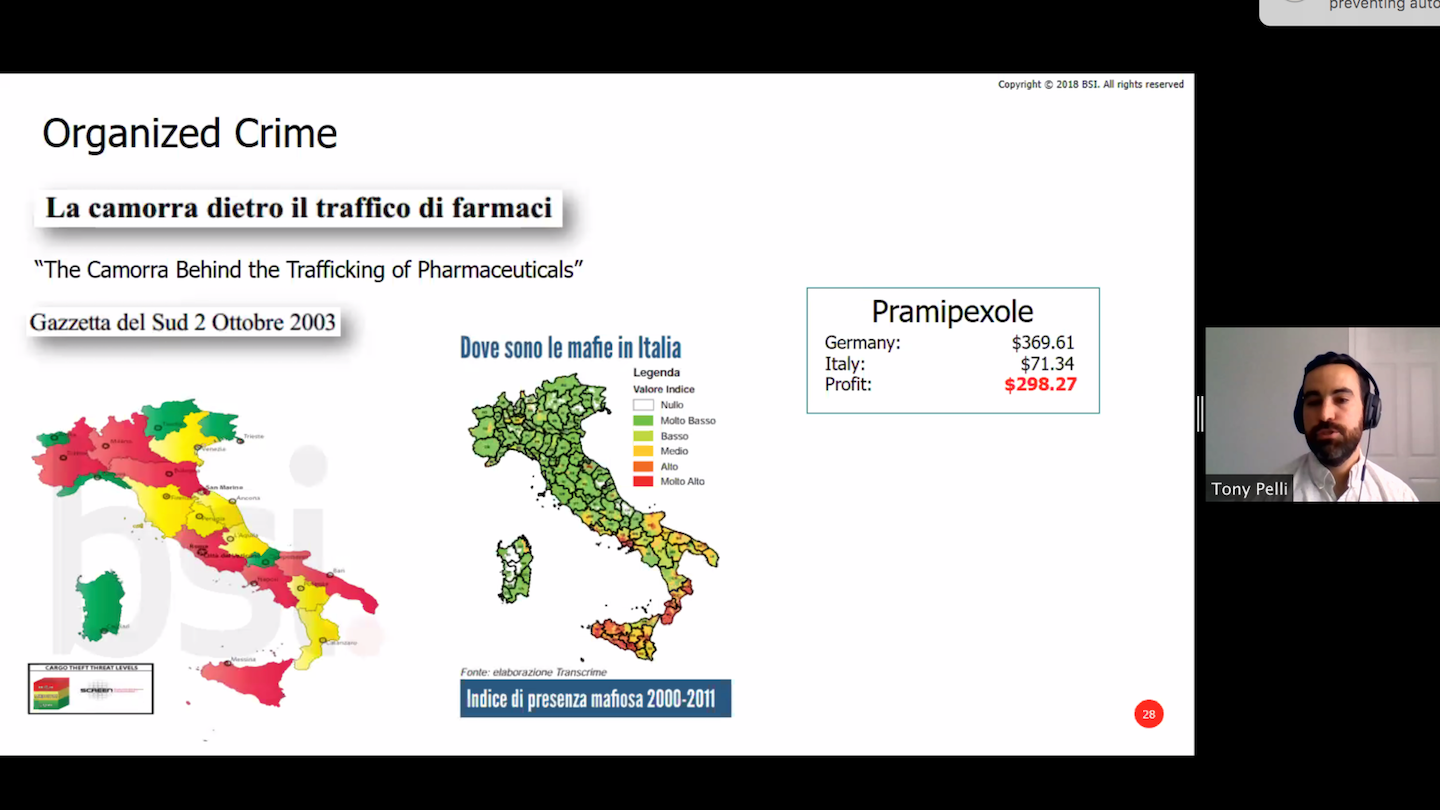 Organized crime hot spots see more sophisticated cargo theft.5. One of the biggest pharma thefts in 2020 was in Italy, in which $1.2 million in oncology drugs were stolen from a cold storage warehouse. The second largest, also in Italy, involved approximately $600,000 worth of pharmaceuticals stolen from a distributor. In that case, employee involvement was suspected in a long-running scheme. Pelli noted that due to organized crime, Italy has a fairly sophisticated network for stealing and redistributing drugs to other countries. “That's something that we've seen over and over again—drugs are siphoned out of legitimate markets in Italy, and in some cases resold in places like Germany, where you can get much higher prices for them,” he said. Higher prevalence of mafia activity equates to greater numbers of cargo thefts, including in regions such as Naples.

6. The most targeted drugs still depend on the region. In Mexico, the most targeted drugs were (as expected) erectile dysfunction treatments and (unexpectedly) oncologic drugs. Typically more specialized medicines for cancer and arthritis require a more sophisticated resale network. “This is suggestive of the kinds of risk factors in Mexico with its greater organized crime presence than you see in countries like the U.S. or Canada, where thefts are targeting more expected opioids or lifestyle drugs,” noted Pelli.

7. Theft of PPE and medical devices have typically accounted for a very low percentage of overall theft. This was true prior to Q1 and Q2 of 2020, when there was a significant jump in PPE and medical device theft.  This includes N95 masks, gloves, and COVID-19 tests being stolen or counterfeited throughout the supply chain. “One thing that we're seeing is that they're being diverted from hospitals as well,” said Pelli. “If you look at the types of products that were stolen in Spain in 2019, you'll see apparel and footwear was at the top in addition to food and beverage.” There’s been a dramatic shift in 2020, and with almost 40% of incidents in Spain involving medical devices and supplies, where the rest remains as expected.

Pelli said he encourages attendees to look at reported incidents, but also look at risk factors such as organized crime groups that would be able to siphon drugs from legitimate supply chains into illegitimate supply chains. He asked, “Are there major price differences that make it attractive to do so? Is there a scarcity of the drug that creates that kind of black market? Is there corruption that facilitates all of that or government policies that have unintended consequences of resulting in those types of issues?”

In terms of COVID-19 vaccines, there is certainly much to figure out in securing supply chains. Chuck Forsaith, vice president at HDA's PCSC, noted that the federal government has visited manufacturers and distributors for security assessments because they know the visibility of this particular type of product.

“We're not going to know this until distribution starts, but at this point in time, I'm not as concerned about inside thefts relative to the people that are producing the vaccine. I still have concerns about outside thefts and the like. That's going to be something that BSI and PCSC will be watching closely,” said Forsaith. “I think if there's any supply chain that will get plenty of attention, it will be that vaccine supply chain,” added Pelli. “So may have better vetting of carriers than you typically would, but I think the concern would be where capacity is really stretched.”

For vaccines in development that require subzero temperature distribution, there isn’t a high volume of capacity. “I think there may be cases where you'll see some fly by night carriers or logistics companies that are potentially able to be included in some of those supply chains, just because of the urgency and the lack of capacity,” said Pelli. “And that would be where you need to look out for insider theft. But that's true generally anyways—it's those less-known carriers where you're going to have issues. For the major parts of the supply chains, it should be pretty well in hand.”

PPE requires the same due diligence as any material sourcing. “Start checking the business history of that company—if there have been frequent business transformations, if they're a company that never made PPE, but all of a sudden is making a whole lot of PPE,” said Pelli. “Be wary of people saying, ‘Hey, we can get you five million of these tomorrow,’ but they've never had that kind of volume before. Ask them for references from other customers that you can actually follow up on and chat with. Also be wary if they want to change their payment terms or price at the last minute.” BSI has put together a short primer on factors to look out for when sourcing PPE. The company is following stories in their SCREEN intelligence tool. Clients typically have access to that information, but they are also making the COVID-19 related information available for free without a subscription.

Barry Conlon, CEO and founder at Overhaul Group, Inc. noted the unfortunate timing of airline furloughs and closures just before the supply chain will need to carry the heavy load of COVID-19 vaccines and treatments: “Airlines are a heavily regulated industry. It’s not easy to mothball an airline and then just restart them again because crews lose their certifications. It would be devastating for transporting the COVID-19 vaccine to lose more airlines.”

Taking place Mar. 30 and 31, the event includes focused group discussions that will offer attendees an opportunity to participate in an extended conversation around a focus topic.
Mar 1st, 2021

The Logistics of Supply Chain Visibility

Join us as we look back at the most-read Healthcare Packaging stories of 2020. Coming in at #3, five megatrends that will shape the future of business and the world.
Dec 30th, 2020
More in Logistics/supply chain