Part Seven of a Healthcare Packaging Playbook survey shows that while serialization has its greatest role in pharma, there’s also an impact on other industries. 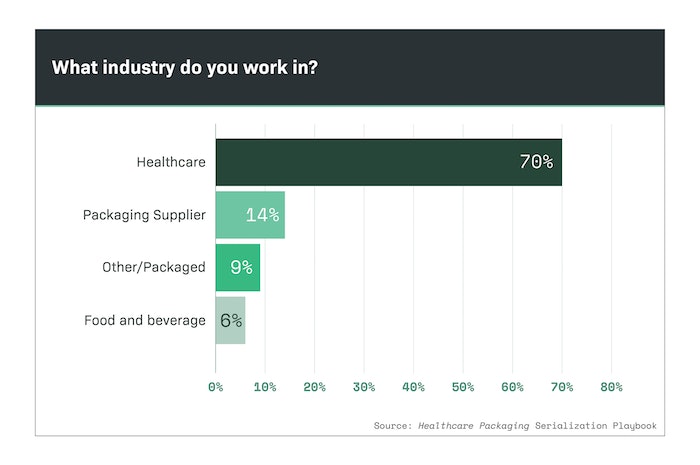 Part Seven of a Healthcare Packaging Playbook survey shows that while serialization has its greatest role in pharma, there’s also an impact on other industries.

While seven of 10 downloads (Chart 7.1) of the Playbook came from end users in the healthcare market, suppliers of cameras, barcode scanners, labelers and cartoners sought the information as well. So too did food and beverage and other packaged goods industries.

“It’s good to see that others outside of healthcare are interested in how serialization is being applied in this industry, said Dirk Rodgers, Founder of RxTrace.com. “Pharma’s experience with serialization can show the way for industries like food and beverage and consumer packaged goods, even absent a mandate.”

Looking specifically at a breakout of respondents in the healthcare market (Chart 7.2) showed that more than eight in 10 worked in pharmaceuticals, followed closely by those in medical devices and biologicals/biopharmaceuticals.

Rodgers commented, “This is a good indication of the value of the contents of the Playbook, which extends beyond just prescription drugs and biologics. Many of the issues faced by medical device manufacturers as they implement the FDA’s Unique Device Identification (UDI) requirements are the same or similar to those faced by drug and biologic manufacturers in meeting DSCSA. Many of the lessons learned are transferable.”