Two healthcare veterans discussed how recycling fits (or doesn’t) into their fast-paced OR operations at the Nurses’ Panel at HealthPack. 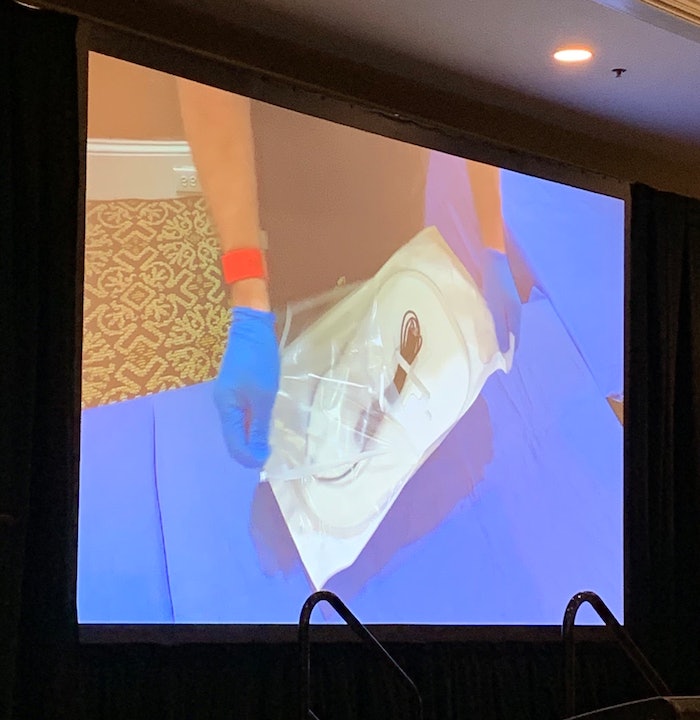 Experts opened unbranded packaging as if they were in the field, with the livefeed cast on screens in the main HealthPack conference room.

The Nurses’ Panel at HealthPack always features valuable insights from those on the frontlines of healthcare. Here, two operating room (OR) staff with decades of experience get candid about the hurdles of recycling despite the desire being there.

For their opinions on the sample medical device packages they opened at the Mar. 2020 show, check out Nurses Reveal Their Packaging Pain Points.

HCP: With such limited time during procedures, how does recycling fit into your operations (if at all)?

[Editor’s note: The answers were lightly edited for clarity.]

OR clinical educator: "It kind of depends on the facility. Some will help you and some don’t even offer the ability to recycle. I’ve asked in multiple places to be able to do it, and they won’t even assist you or allow it to happen.

Most recently, at one of the hospitals we were trying, it’s just not easy. There are a lot of barriers to it: where you’re going to put it, who’s going to collect it. So, in an ideal situation, we would—there’s so much that you could recycle in the OR, if someone could come up with the plan."

Cath lab and acute intervention (STEMI) technical operations manager: "Within Atrium Health, there are five cath labs in the Charlotte metro area. There’s one a couple counties away which is Atrium Health in Cleveland county—somebody in the OR did a clinical project around recycling as a career advancement opportunity.

They understood that when you’re opening up a case, before the patient rolls in the room or even after they come in, there’s so much packaging you’re tossing off that goes into the garbage.

The clinical project required an extra garbage can and a green bag. So before you stick or cut the patient, every package that you’ve pulled off goes into this green bag, and over the course of two or three cases, you’ve got two or three big green bags full of recycling.

Once there’s an incision or a needle stick from the patient… anything that’s opened up thereafter would go into biohazard because of potential blood contamination. At the end of the procedure the biohazard bag and the green recycling bag would all go to soiled utility.

The green bag would go in with the garbage, non-biohazard, in the same large bin. Environmental services would later on take that bin (I haven’t seen the process through) and separate it there at the dock or wherever they haul the garbage outside of the facility.

It did require an extra garbage can, which in small spaces is a challenge… where are you going to put it? It was actually very well-managed at this facility, but at a larger facility like ours, it would be challenging as our rooms are small.

I do know that during the event we just did, there were a lot of questions regarding recycling—and by the way, I thank you all [Healthpack attendees] for being very concerned about recycling—just know that if a product is being introduced after the initial stick or cut, it’s less likely to go into a recycling scenario."

For more on sustainability in the hospital setting, check out the following:

Partnership implements initiatives to reduce plastic waste and use of materials that make it harder to recycle packaging; this moves Amcor’s 2025 goal for fully recyclable packaging forward.
Jan 11th, 2021

Companies Collaborate to Bring Circular Materials to the Biomedical Industry

The company has contracted with national energy advisory firm 5 and ENGIE Resources, LLC on a five-year energy agreement that supports the development of renewables.
Mclean Packaging
Jul 10th, 2020

Schoolchildren sheltered-at-home can learn about the life cycle of paperboard containers due to the partnership of Colbert Packaging and the Paperboard Packaging Council’s “Trees Into Cartons, Cartons Into Trees” (TICCIT) program.
Colbert Packaging Corp.
Jun 22nd, 2020

Logoplaste has partnered with Biomimicry 3.8, to embark on a project to design industrial plants that are carbon neutral and regenerative.
Logoplaste
Jun 10th, 2020