Topical inhalation products to treat conditions such as asthma and COPD are a large and fast-growing market. Beyond these applications, the pulmonary route is a very good candidate to deliver systemic drugs such as insulin. Indeed, it is a non-invasive, highly effective and painless way to deliver a drug. The purpose of this presentation was to review the inhalation devices solutions available on the market. 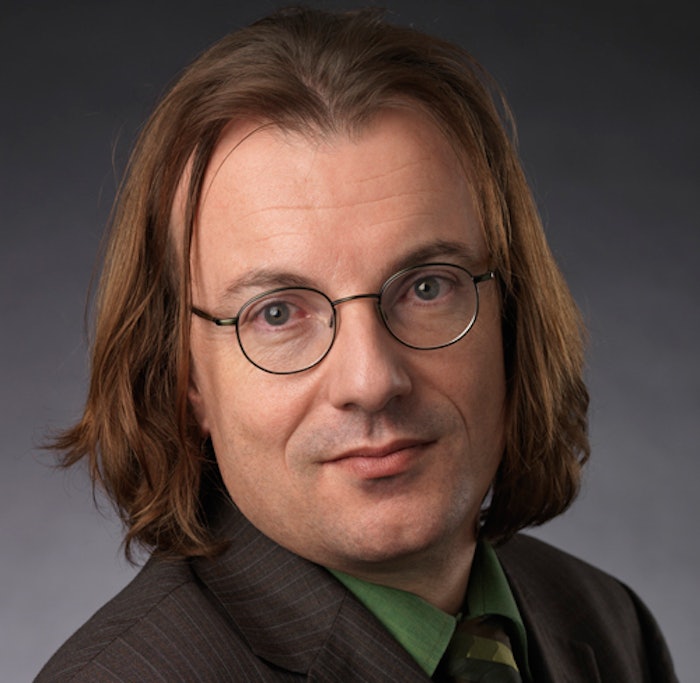 Rexam Healthcare has a long history in inhalation. Key players in this area have trusted the company to develop and industrialize pulmonary devices for strategic products.

A the last Aerosol Forum congress held in Paris this month, Patrice Lewko gave an overview on the inhalation devices available on the market

Patrice Lewko is Global Marketing Director for Rexam Healthcare. He has been with Rexam since 1994 working in packaging solutions both in the USA and in Europe.

An inhaler is a medical device used for delivering medication into the body via the lungs. It is currently mainly used in the treatment of asthma and Chronic Obstructive Pulmonary Disease (COPD) as a reference to bronchitis or emphysema.

- Asthma is caused by inflammation in the airways that leads to difficult breathing. It is a common disease with symptoms that range from mild to severe. An estimated 300M people worldwide suffer from asthma. Treatments consist in reducing the inflammation and dilating the airways.

- COPD is caused by an obstructed airflow to the lungs often linked to tobacco smoking. The damages are permanent. COPD ranked as the sixth leading cause of death in 1990 and is estimated to become fourth one worldwide by 2030.

- Inhalers are also in development for topical treatments such as inhaled corticoids/antibiotics and systemic uses such as pain treatment for migraine, inhaled insulin used in treatments for diabetes, low molecular weight heparin, Parkinson’s disease or inhaled vaccines.

For pulmonary diseases, the most obvious advantage is that the inhaled drug offers direct drug delivery to the airways. It thus enables lower drug doses than with pills or tablets and minimizes risks of systemic side effects or toxicity in the rest of the body. For systemic treatments, compared to injection, inhaled drug therapy is painless and more convenient. It is non-invasive, leads to a rapid response and improves patient compliance.

There are different types of inhalation devices

Many people are used to the classical form of inhalers, the pressurized Metered Dose Inhalers (pMDIs)

Over the last decade, Dry Powder Inhalers have been growing at a faster pace. These don’t require the same level of coordination from the patient.

- The most widely used inhaler is the standard pressurized Metered Dose Inhaler (pMDI) which consists of a pressurized container. It contains a propellant gas that provides the energy to release a fixed dose of drug on each activation by the patient (thanks to a sophisticated valve). It is made of three parts: a canister, a metering valve and a mouthpiece. The pMDI produces a fast aerosol plume. To use it correctly, the patient has to breathe in deeply and slowly while firing the device. Poor coordination may cause poor delivery of the drug to the lungs by absorption in the GI tract. Despite this difficulty, pMDIs remain popular and offer advantages: multi-dose, compact, portable, convenient and relatively inexpensive.

- The Dry Powder Inhalers (DPI) are a propellant-free alternative. They release a dose of medicine as a powder aerosol that is inhaled by the patient. Most DPIs rely on the force of patient inhalation to entrain powder from the device and require no coordination between activation of the unit and inhalation. However, the most common error patients can make with a DPI are by failing to load a dose correctly or by exhaling into the DPI so that the dose is blown away. The particle velocity for this type of devices is flow dependent. Delivery to the lungs is optimum when breathing rapidly and deeply.

- Breath-activated inhalers (BAI) are based on MDIs with the difference that on breathing in, the inhaler automatically delivers one dose of the medication. With BAIs’ mechanisms, firing and inhaling are automatically coordinated and can thus achieve good lung deposition even for patients having coordination problems. Disadvantages for these systems are often linked to higher costs.

- Other systems are available on the market such as Liquid Droplet Inhalers and nebulizers or other specific devices.

MDIs have traditionally used chlorofluorocarbons (CFCs) as a propellant which moves medicine out of the inhaler so patients can breathe the medicine into the lungs. Further to the Montreal protocol, the CFC inhalers have been progressively eliminated from the market.

A new safe alternative non-chlorinated propellant, hydroflouroalkane (HFA), has been created to replace CFCs, and became the FDA required standard for all inhalers. HFA inhalers provide the same level of safety and efficacy as CFC inhalers, but without harming the ozone layer.

There is no perfect inhaler. Each type of device offers advantages and disadvantages.

- For patients, a device should be easy to use, multi-dose, small, quick, safe and with positive feedback.

- For healthcare professionals and to respond to regulatory constraints, the device should offer a consistent dosing, high deposition, and efficient aerosolization and be user-independent.

- Finally from the point of view of the manufacturer, it should be cost-effective, robust, easy-to-fill and compatible with multiple drugs. For pharmaceutical companies, inhalers are important to differentiate their products.

The important criteria leading to the device selection includes the drug, pathology, ease of use, patient age and skills, cost of medication and patient’s preference. Any inhaler can be misused so that little or no drug is deposited in the lungs.

The most important issue is to ensure patients use their devices correctly and increase their adherence to the treatment.

From asset tracking and authentication to adherence and disposal, IoT stickers hold promise for healthcare products. One way to boost the tech’s ROI? Sensing throughout the life of the product.
Keren Sookne
Jun 23rd, 2021
More in Home