Forget Grafts, Now We Can Regrow Skin in Open Wounds

Scientists at Salk Institute found a way to reprogram cells into the base layer of skin cells to heal life-threatening wounds. 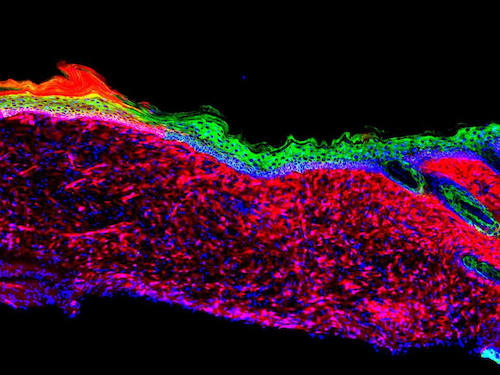 Epithelial (skin) tissues were generated by converting one cell type (red: mesenchymal cells) to another (green: basal keratinocytes) within a large ulcer in a laboratory mouse model / Image: Salk Institute

Severe wounds caused by burns or ulcers destroy the base layer of skin cells necessary for regenerating, leaving just one option for healing: surgical skin grafts. However, a recent Independent article discussed a new development that will very likely change the script on how the body heals from life-threatening wounds. A team of researchers at San Diego’s Salk Institute has identified four key cellular components that skin needs to regenerate and found a way to create them by reprogramming other cells within a wound.

The natural healing process works by slowly closing the perimeter around the wound, but the team set out to essentially create skin from nothing. They inspected cellular products of keratinocyte and wound cells and identified 55 protein molecules pertinent to skin regrowth. Through trial and error, they whittled it down to just four key proteins and loaded their genetic instructions into retroviruses and applied them to non-healing ulcers on mice. New skin formed within 18 days. The discovery gives hope for simple treatments for hard-to-heal wounds that typically plague the elderly and patients with diabetes.

The Coronavirus pandemic is creating a growing waste crisis even as we see images of the earth’s environment clearing from less pollution. A few months into the crisis, and the numbers are staggering.
Kim Overstreet
Jun 29th, 2020
More in Home