A team of wildlife veterinarians used fish skin bandages to treat a bear badly burned in a Northern California wildfire. 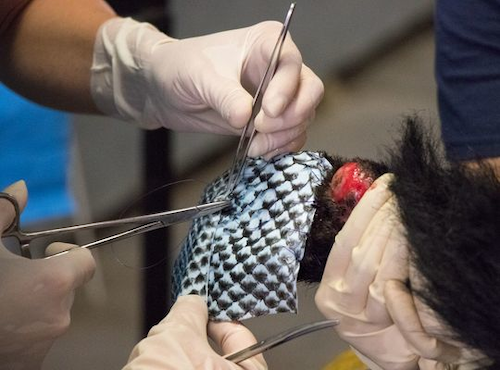 The Northern California wildfires have claimed over 172,000 acres of forest, putting both humans and animals at risk. A recent article from Record Searchlight covered an uplifting story about a team of wildlife veterinarians who employed a unique form of treatment to help a young bear burned by the fires. A team of workers fixing utility poles in the mountains near Whiskeytown Lake, CA encountered a bear licking its badly burned paws. They quickly alerted wildlife officials to help the bear.

After tranquilizing the bear, a team took her into the lab where they attached sterilized tilapia skin to the bear’s feet. This experimental treatment has been used just a handful of times; one instance was last year to help two adult bears injured by forest fires in Southern California. The fish skin performs better than synthetic bandages as they provide direct, steady pressure to wounds and prevents bacteria from entering. The team is optimistic the bear will make a full recovery and soon return to nature.

Supply chain and logistics professionals will be focusing on labor issues and new technology in 2020, particularly those that improve safety and efficiency.
Kim Overstreet
Jan 7th, 2020
More in Home

Quick Hits: Seattle Schools Say to Get Vaccinated or Don’t Come Back

Seattle Public Schools warned thousands of students that they will not be able to return after Christmas break without vaccine law compliance.
Tim Hayes
Jan 2nd, 2020

We’re taking a look at the most-read Healthcare Packaging stories of 2019. At #2 is this article detailing the value that RFID can deliver to the healthcare industry.
Keren Sookne
Dec 31st, 2019

The measles state of emergency ends in Samoa as a mass vaccination drive brings the lethal disease under control.
Tim Hayes
Dec 30th, 2019