Time To Try Trayless Meat in the U.S.?

At the Harpak-ULMA PACK EXPO Las Vegas booth, a key emphasis was on trayless ground meat backflushed with a mix of oxygen and carbon dioxide. 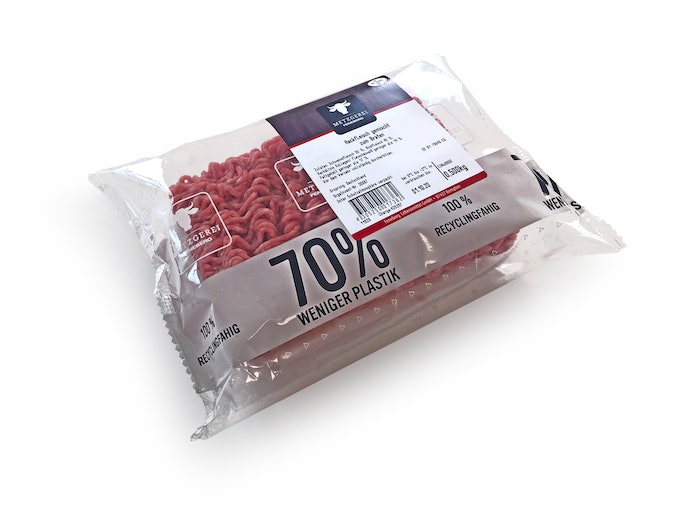 This trayless format for ground meat has proven popular in Europe, and now Harpak-ULMA is testing it in the U.S.

Harpak-ULMA Flow Wrap Product Manager Hugh Crouch, who also talked about the format at an Innovation Stage presentation,  believes this concept has a shot at being adopted in the U.S. because by eliminating the tray there’s not only a cost savings but also a source reduction advantage. In addition to removing one whole piece of packaging by going trayless, you also eliminate the trucks and the fuel they would consume when trays need to be delivered. As Crouch puts it, “Just send a roll of film to the meat packer and that’s it.”

The Harpak-ULMA flow wrappers recommended for trayless ground meat are either the Ulma FM 300 for speeds to 70 packs/min or the FM 500 for up to 130 packs/min. The films being applied vary considerably according to shelf life requirements.

Crouch admits that, historically at least, the U.S. consumer has not been all that receptive to ground meat packaging formats other than the tray plus film overwrap. But considering how vociferous consumers have become where sustainability is concerned, he thinks it may be time to try this format in the U.S., and in fact testing is now underway. Crouch also points out that the shelf life of such packs in the U.S. marketplace would need to be longer than what is required in Europe due to the greater distances that fresh ground meat needs to travel on this side of the Atlantic. So the flexible films and gas mixtures used would likely need some tweaking.

Also featured at the Harpak-ULMA booth was the Artic side-seal flow wrapper that is capable of applying a zipper reclosure feature to a flexible film package and the Flowvac -55, an intermittent-motion flow wrapper that leverages Rockwell controls technology.