Digital printer does the work of two machines it replaces 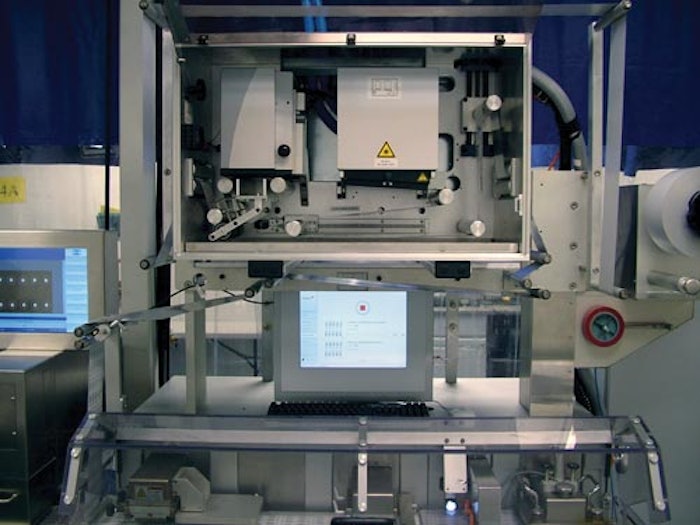 ONE FOR TWO. This digital printer (above) replaces two former machines and produces superior print quality for contract packager

Apace Packaging LLC is a family-owned contract packager whose success depends on satisfying its customers, most of whom produce solid-dose generic prescription pharmaceuticals. So when the Fountain Run, KY-based company began experiencing printing problems related to two printers on a new thermoform/fill/seal blister packaging line, it was completely unsatisfactory.

“Before last year we had printing equipment that we were having considerable problems with in terms of print alignment on the foil blister lidding,” explains Darren Shirley, the company’s president. A mat printer printed permanent information onto the top of the foil, such as product name, strength, National Drug Code number, etc., while an ink-jet printer also mounted to the tf/f/f machine printed variable information such as lot code and expiration date.

“The print kept drifting over the lines and would not hold its true configuration,” says Shirley. Keeping the print from the ink-jet unit centered on the blisters was problematic. The unit could only print while the lidding was stopped, and it printed both while the print head traveled away from its home position across the lidding, and as it returned to its home position. Since the lidding was not centered on the print head’s path, printing on the head’s return-to-home stroke required different timing than printing on its extend stroke. Thus, if the timing was not perfect, the lidding would still be moving or begin moving while the printing was being done. That caused the print to be curved at either the beginning of the line of print or at the end of the line of print. Not only would the curved section of print be unreadable, it would cross the perforation lines on the blister cards, both of which were unacceptable.

There are several rollers that direct the lidding from its unwind unit, through the printer, and on to the sealing station. One other challenge: finding ink for each printer that would fully dry on the lidding before contacting the first roller after the printers.

“We would probably have lost a customer had it not been for Griffin-Rutgers coming in and helping us,” admits Shirley.

Griffin-Rutgers distributes the Heidelberg Linoprint FixedLine 140 digital printing system designed to provide high-quality drop-on-demand print on every product or package to guarantee complete traceability. “The Linoprint digital printer replaced both of our previous printers and solved the ink-drying difficulty by using an appropriate ultraviolet [UV]-cured ink,” says Shirley. “The UV ink cures instantly as it passes through the UV drying source.” The dryer does not produce heat, so there is no possibility of deforming or damaging the material.

Mark Johnson, Apace’s plant engineer, had a positive experience with Griffin-Rutgers equipment at a previous job. Coupled with a referral from one of its material suppliers, Apace decided to meet with Griffin-Rutgers. “We called them up and hit it off great with Jim Umbdenstock,” Shirley recalls. “They came in here and conducted an assessment of the problem. Last summer we replaced the former printers with the Griffin-Rutgers digital printing system and it has worked great ever since.”

By last autumn, Apace had the Linoprint machine up and running. It’s mounted to a new TF1 blister thermoforming machine supplied by Pharmaworks. “Pharmaworks is an excellent company,” says Shirley. “I’d recommend them to anyone looking for that kind of equipment.”

Added in 2010, the TF1 first unwinds the film, typically 10-mil polyvinyl chloride with a polyvinylidene coating that improves the blister’s ability to resist moisture and oxygen penetration. The film is supplied by Perlen Packaging. The rollstock unwinds to a forming station, is heated, and is formed into cavities. Tablets are dropped out of a feeder into the cavities before the material indexes down the line where foil-lidding material from Amcor descends and is heat-sealed to the product-filled film.

The Linoprint prints in black on the top side of the foil the name of the product, the National Drug Code number, the lot and expiration date code, the dosage strength, and a 128 bar code for scanning by either a retail or hospital pharmacy. At a hospital or long-term care facility, Shirley explains, “it’s scanned by a bar-code reader when it’s dispensed to the patient to make sure it’s the right medication for the patient.”

Between the filling and sealing areas, a Scanware Product Inspection System unit inspects each blister cavity for proper product size, shape, and color. The unit also detects empty blister cavities and broken product. The TF1 receives a signal from the Scanware system if a defect is detected so that the defected blister is rejected prior to downstream cartoning. “We chose the Scanware system because it is one of, if not the only system with the advance capability of detecting color as well as size and shape,” says Shirley. “It will even inspect product that is two different colors, such as the capsule with a body in one color and a cap in a different color.”

Filled and sealed material indexes and is cut into blisters. Apace typically produces a 2 x 5 or 3 x 5-cavity hospital unit-dose blister, or HUD. Most of these are in quantities of 30, 60, or 90 tablets and include primarily generic prescription products. “These are mostly maintenance medications for cholesterol products,” says Shirley. Next, blisters are automatically placed into cartons on a Pharma Works C-100 rebuilt cartoner. Blisters proceed past a SVh Series checkweigher from Anritsu, selected for its economic and accuracy advantages, demonstrated on two other packaging lines at Apace. Finally, the cartons are labeled on the leading edge and bottom side with a Re-Pack Dual Hugger Belt Labeling system, also supplied by Griffin-Rutgers.

“Griffin-Rutgers has been excellent to work with,” says Shirley. “They came and worked with us for a full week. They stand behind their quality of work and their machinery. There are a lot of companies out there that say that’s their motto but actually doing it is a different issue. They send their technician for a day or two and they get it up and running about 75 percent, expecting you to then run it yourself. The thing I liked about Griffin-Rutgers is they stayed and trained, and they retrained multiple people until the machine was running without any hiccups. That was just great. It’s the way we like to do business, and I guess that’s now why we are so loyal to them. Now we can reach out to them for service, and they give prompt responses and actually can open our schedule in the merge sheet to come and help us.”

Asked about a return on investment for the equipment, Shirley explains, “We determine return on investment based on our customer volume per month and what all the machines combined allow us to run. I don’t really look at it as per machine, but by complete line cost and how many packages I get per month out of that. So I couldn’t tell you how much that printer gets in return, but I’d estimate the ROI for this entire line is somewhere around 20 months.”

Of course, the ROI is an important economic number, but it’s only part of the reason Apace is so satisfied with the blister thermoforming/printing equipment. Says Shirley, “The previous printer put us behind about a couple of weeks, but we were able to catch up because of all of the efficiency of the new Linoprint. Griffin-Rutgers stayed and helped us run it with actual customer jobs, doing everything to make sure we met customer demands. So I couldn’t appreciate it more.”

Since OEMs also serve manufacturing clients who are themselves vulnerable to cyberattack, there are a few extra considerations to be aware of with regard to cybersecurity.
Kim Overstreet
May 18th, 2021
More in Home