A clean slate for coding 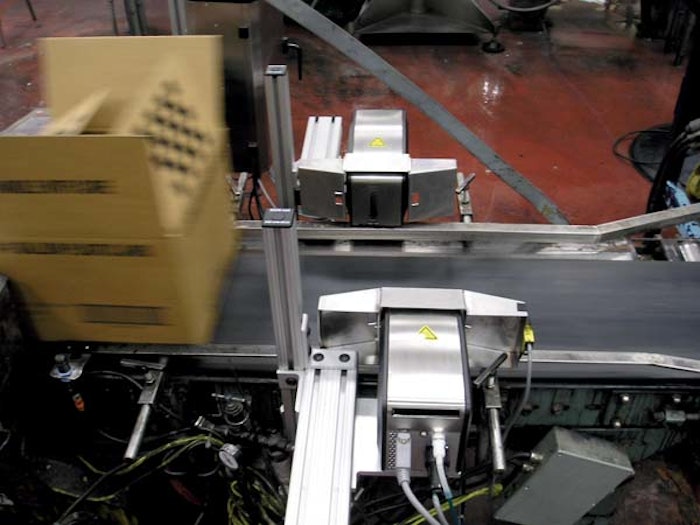 Expensive ink, unreadable bar codes, and ink spills on the floor—these were some of the problems production supervisor Fred Lawson experienced with the ink-jet printer used to code cases at Cains Foods, a private-label manufacturer of sauces and salad dressings in Ayer, MA. Lawson was looking for a cost-effective alternative when Black Dot (www.blackdottech.com) approached the company to run a beta test of its new 200 series coding system. The coder uses hot wax ink that comes in an ink puck about the size of a deck of cards. The puck is inserted into the imaging module and melts using a minimal amount of power so that the unit is ready to print in 10 minutes or less.

Ned O’Donovan, Black Dot’s vice president of sales and marketing, installed the coder alongside Cains Foods’ ink-jet coder at midnight to ensure that production wasn’t disrupted. By 10 a.m. the next morning, Cains Foods was printing Interleaved 2 of 5 bar codes on cases, producing a total of 259 cases the first day.

Lawson sums up the print quality of the new coder in one word: phenomenal. “With our previous system, I wasn’t able to scan codes quickly enough,” he says. Using a handheld scanner, Lawson had to move the scanner up and down and “play around with it” to read the bar codes. But with the Black Dot coder, he says, “We can hold the scanner up to the code, and it scans immediately every time.”

The new system proved invaluable for printing EAN 128 codes for one of Cains Foods’ customers. Because EAN 128 bar codes are so dense, ink from an ink-jet printer can bleed, making the code unreadable. With the Black Dot system, the wax dries instantly, resulting in crisp, clear lines.

“Before using the Black Dot coder, the EAN 128 codes would almost never scan,” says Lawson. “I would get calls from the customer saying they couldn’t get the bar codes to scan.”

Prior to using the Black Dot system, Lawson had to memorize item codes on a daily basis to access jobs in the computer system. “Right now, I use two units to do one job,” he explains. “One printer prints the data, and another unit prints the bar code.” With Black Dot’s unit, Lawson can enter and print both the product information and the bar code, thereby condensing the function of two machines into one. Seeing both the product information and number simultaneously helps him recognize jobs more easily and eliminates the need to memorize numbers.

In addition to the 100% scan rate, Lawson is pleased with the coder’s clean, environmentally friendly ink. “Before, we had problems keeping the ink contained and off the floor,” he says. “It could take hours to clean. With the Black Dot system, if the ink escapes—which I haven’t seen evidence of yet—you simply scrap it up and discard it. Long-term, I see a huge cost savings on ink and sanitation supplies to clean the floors.”