Foodservice firm to use time indicator

Foodservice supplies company DayMark, Bowling Green, OH, expects to be to be the first North American user of diffusion-based expiration-date indicators from Timestrip this month when it introduces Cooler Strips. 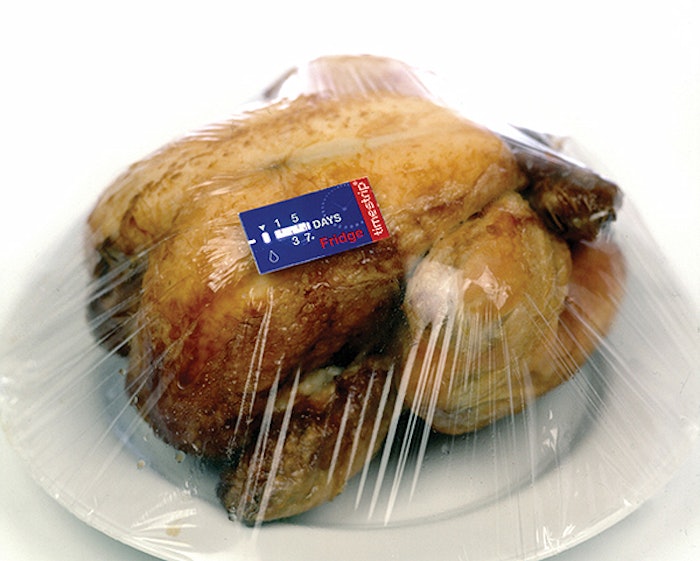 Based on capillary action (or diffusion) at either refrigerated (40oF) or frozen temperatures, Timestrip labels indicate a product’s remaining shelf life.

For Cooler Strips, foodservice workers can attach the 3¼4’’x11¼2’’-pressure-sensitive indicators to opened food packages upon refrigeration. Two-, three-, and five-day expiration refrigerated Cooler Strips will be available, according to Timestrip inventor and president Reuben Isbitsky. The largest pack size will be 100 Cooler Strips. Cooler Strips pricing has not been set.

Timestrip labels function more like a clock than previous time-temperature indicators. Rather than an enzymatic or other reaction, they are based on the capillary action—or diffusion—of an easy-to-read colored indicator over time.

The user depresses a small reservoir that releases the liquid within the Timestrip and basically starts the clock. Tailored to the application, frozen or refrigerated, the indicator color (typically red) moves across a printed scale. The Timestrip indicator is available in other colors, such as for medical applications.

Timestrips were introduced for sale directly to consumers in the United Kingdom in April 2004 at Morrison’s supermarkets and other UK retailers. A clamshell pack of 10 Timestrips sells for the equivalent of $1.85 in UK stores like Morrison’s. It is available there in two-month frozen or seven-day refrigerated versions with a two-week refrigerated version set to launch. —Rick Lingle

Multifeeder Technology is now MFT Automation. The rebrand will feature a new logo and website to reflect the enhanced capabilities of the company.
Natalie Craig
Sep 29th, 2021
More in Home