The rise in the U.S. PET collection rate for recycling, including for both PET bottles and thermoforms, points to a significant rebound in PET redemption after the roadblocks presented by the pandemic.

Anne Marie Mohan
In its recycling report, NAPCOR documented the largest amount of post-consumer PET ever collected, with bottle collection in the U.S. exceeding 1.9 billion pounds for the first time.

PET collection for recycling has reached a new high. That’s according to The National Association for PET Container Resources (NAPCOR), which recently released its “2021 PET Recycling Report.” Among the first-time achievements documented in the report, NAPCOR shared that 2021 witnessed the largest amount of post-consumer PET ever collected, with bottle collection in the U.S. exceeding 1.9 billion pounds for the first time. This represents a 1.5% increase in the U.S. PET recycling rate to 28.6% up from 27.1% in 2020. In another first, in 2021, the amount of thermoforms collected in the U.S. and Canada reached its highest-ever number, at 142 million pounds.

“These rates mark two major milestones in the growth of PET awareness, appreciation, use and reuse. “The 2021 increase is a powerful indicator that pandemic-driven disruptions to recycling services are getting back on track,” says Laura Stewart, NAPCOR executive director. “It is also important to point out that the North American rate is over the 30% recycling threshold suggested by the Ellen McArthur Foundation. This is viewed by many industry pundits as the post-consumer benchmark for proving that recycling works in practice and scale across multiple regions representing at least 400 million inhabitants.”

“The rebound in the amount of PET bottles collected in 2021 is encouraging,” adds Tom Busard, NAPCOR chairman, chief polymers and recycling officer for Plastipak Packaging, Inc., and president of Clean Tech, Plastipak’s recycling affiliate. “PET recycling is working, but there is a need to see increased collection to meet both legislated and voluntary recycled content demands of the future.”

Supporting the concept that COVID-19 disruptions to PET recycling have finally been overcome, the 2021 recycling report indicates that:

·      For the second consecutive year, end use market consumption of rPET used in food/ beverage and non-food/beverage bottle categories, once again surpassed demand in the rPET fiber market in U.S. and Canadian markets.

·      As a single category, food/beverage alone took the largest share of rPET consumption.

·      The U.S. rPET textile fiber industry faced higher prices and more competition for clear rPET in 2021, but still achieved a total rPET fiber production of over 1 billion pounds. This was achieved by sourcing greater volumes of colored rPET flake (57%) and greater volumes of post-industrial rPET flake (11%) compared to 2019.

“At NAPCOR, we continue our work to educate the public on how PET differentiates itself from other packaging formats, allowing brand owners to leverage its recycling value,” says Stewart. “Beyond being recyclable over and over again, PET has often-overlooked benefits—including decreased food spoilage, reduced greenhouse gas emissions, and an overall stronger environmental profile compared to other packaging materials. The more we increase awareness of PET and motivate proper, consistent recycling levels, the closer we will get to put the U.S. on par with global recycling rates and, most importantly, the greater the impact we will have on the planet.” 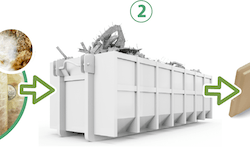 Bayer and yet2 Launch Innovation Challenge for Biodegradable Packaging