Air Freight Packaging Must be Approved by FAA 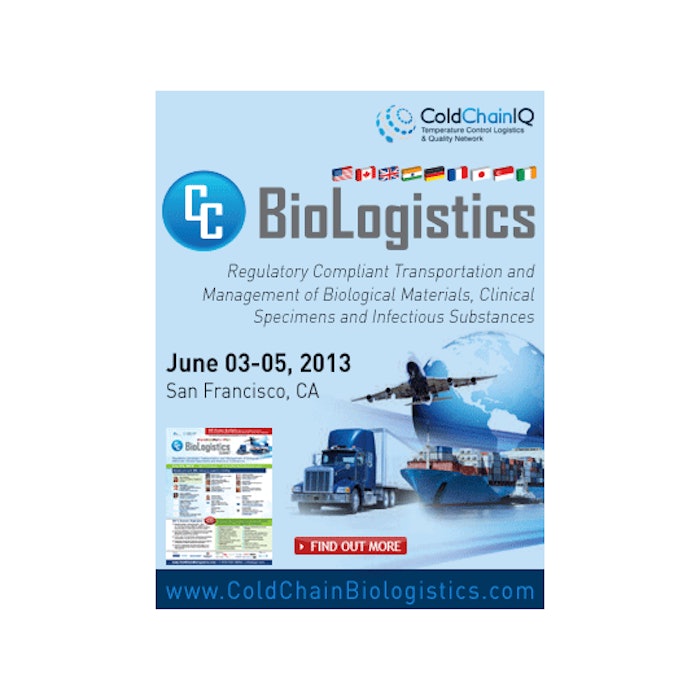 At the BioLogistics Summit in San Francisco, Tom Ferguson, senior technical consultant for the Council On Safe Transportation of Hazardous Articles, will make a presentation entitled, “Lithium Battery Risks Shipping Air Freight.” In this Q&A, Healthcare Packaging talks with Ferguson.

Healthcare Packaging (HCP): What is the key issue regarding lithium battery risks in temperature-sensitive air distribution?

Tom Ferguson: The real issue in this industry is that many data loggers today may not be approved by air operators to operate during transport. This is due to a failure to understand that the Federal Aviation Administration (FAA) has a final say over devices active in transport. Whether it be a refrigerated container, a small logging device placed inside or on the outside of a box, package, or container, if the device has not been specifically approved to be active during transport by the air operator, then it is not permitted in air cargo.

The transportation regulations regarding lithium batteries have changed significantly over the last five years, largely due to high-profile incidents in Philadelphia in 2006 and Dubai in 2010, and the troubles encountered on the Boeing 787 in 2013. However, in these cases, battery construction, design, packaging, or misuse may have contributed to the failures. Therefore, understanding the transportation requirements is paramount to safety.

However, transportation is not the only concern. Many cargo-monitoring systems (data loggers, time and temperature devices, etc.) are utilizing lithium batteries for power. While the size of the batteries may comply with lithium battery transportation regulations, devices designed for use aboard aircraft must be approved by the individual air operator in cooperation with their FAA Certificate Management Office. The review goes beyond hazardous material transport and addresses electromagnetic field generation and possible interference with navigation systems.

HCP: What is important to understand about lithium batteries and how they’re used in the packaging and shipping of products?

Ferguson: These are very small lithium batteries, often the size of your typical watch battery. Due to their size, it’s often assumed that they are not regulated in transport. While there are exceptions for shipping small lithium batteries and even equipment containing lithium batteries, the equipment is assumed to be inactive; generally meaning turned off. But in reality, the air operator must review and approve any active device before it can be accepted for transport. This includes devices carried in the cabin of the aircraft by passengers, as well as devices offered as cargo.

HCP: Why is this important?

Ferguson: The lithium battery transport regulations are designed to allow for the safe transport of lithium batteries. With few exceptions, aircraft do not have fire-extinguishing systems in their cargo holds. Instead, they have fire-suppression systems, for example, halon systems that displace oxygen for a certain amount of time. If an active device were to malfunction and a fire resulted, the aircraft fire-suppression system may not be able to handle the fire. When batteries are packed, they are protected against short circuit and surrounded by nonconductive, noncombustible material in most cases. However, if a device is located on the outside of a package where it is subjected to bumps and scrapes during handling or loading, it could damage the device and lead to a fire.

The multilayered approval process reviews the hazardous material transport aspects, the electromagnetic field generation, the ability of the aircraft to address problems that could occur, and possible notification to the pilot of where such devices are located. This approval must be coordinated through the air operator’s Certificate Management Office, and it is not only tied to the hazardous materials transport regulations, but also…just because one air operator approves the device does not mean that all air operators can and will approve the device. Approvals are reached on an operator-by-operator basis.

Now imagine how many devices are currently in the marketplace. Few of them have actually been approved for active use aboard aircraft yet they are used regularly. That means the likelihood of noncompliance is great. And FAA fines for improper cargo shipments, particularly those containing lithium batteries, which can reach six-figure amounts.

HCP: What areas will your BioLogistics Summit presentation cover?

Ferguson: The requirements in place and the steps needed for these devices to be approved. It will address issues of lithium batteries in transport. Lithium batteries have become a battery of choice for electronic power supplies and are found in just about every facet of our lives, including cell phones, tablets, computers, watches, scanners, hand tools, and even electric vehicles. Yet if handled improperly, they can become unstable and result in self-initiating fires.