Tour of the UPS World Hub and Healthcare Logistics facilities in Louisville showcases the 5.2 million sq-ft automated express sorting facility that can process 416,000 packages and documents/hr. 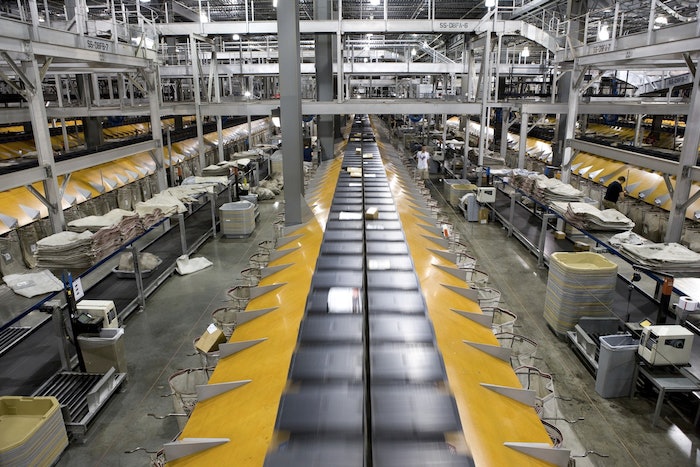 On the day before the two-day conference in Louisville, UPS hosted a tour of its World Hub and Healthcare Logistics facilities. Worldport is described by UPS as the largest fully automated package handling facility in the world. The operation currently turns over 130 aircraft daily, processing an average of 1.6 million packages a day with a record 4.2 million packages processed on Peak Day 2012.

2. Did you know there are 7,982 miles of fiberoptic cable criss-crossing the hub? That's enough to stretch from Los Angeles to Louisville and back twice.

3. Did you know the new hub's air handling system can move more than 11 million cu ft of air/min?

4. Did you know there are more than 155 miles of conveyors in the new hub? That's enough to take you from the hub to Lexington and back.

5. Did you know the new hub has 5.2 million sq ft of floorspace? The Pentagon, billed as the largest office building in the world, has 3.7 million sq ft.

6. Did you know that there are more than 2.5 million sq ft of grating in the new hub? That's equal to about 56 football fields.

7. Did you know there are more than 437 [267 DWS, 170 Camera] camera tunnels for dimensioning, weighing, and scanning packages in the new hub?

9. Did you know that more than 970,000 cy of concrete were used in the construction of the Worldport facility and associated ramps, enough to pave a four-lane highway from Louisville to Nashville?