Connecting the Dots in the Medical Device Supply Chain - dead

Medical device manufacturers can now benefit from a material packaging development courtesy of the cooperative efforts of the resin producer, extruder and thermoformer. - dead 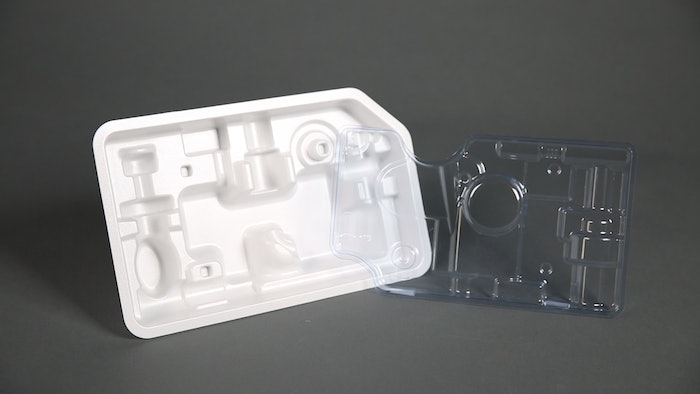 Shown here is thermoformed packaging made from Eastman's Eastalite material.

The typical supply chain follows a path from a medical device manufacturer (MDM) to a distributor to a hospital or medical facility and ultimately to the patient. But in this instance, let’s take a ride along the value chain that begins with a resin supplier that provides pellets to an extruder, which provides sheet made from that resin to a thermoformer, which then sells trays and rigid medical device packaging from that sheet to MDMs.

In this instance, Eastman’s Eastalite™ copolyester is used by Pacur, LLC for extrusion into a PETG foam sheet or rollstock that’s sold to custom thermoformers such as Plastic Ingenuity, Inc. for the manufacture of rigid medical device packages.

According to Eastman, Eastalite is a styrene-free alternative to high-impact polystyrene (HIPS) and other competing products. It is made without butadiene, bisphenol A, bisphenol S, ortho-phthalates or halogens such as chlorine or bromine. The material is compliant with select ISO 10993 requirements for medical device biocompatibility and applicable parts of ISO 11607.

After a three-year journey from concept to product, packaging developed through the Eastman-Pacur-Plastic Ingenuity process is now in use commercially but as of press time, the MDM preferred not to divulge any specifics.

Hawkins: When we started, Eastman had been working on our latest development, which at that time was our Tritan™ copolyester. We have a process called “Voice of the Customer” in which we ask MDMs and thermoformers what they need to serve their marketplace. Tritan was one of those products that we launched because of that feedback. But we also heard a lot about opaque materials and what people did and didn't like about them. One of the most frequently used opaque materials in medical device packaging is HIPS.

We wanted to make a product that was more stable for sterilization, more durable for sterile barrier protection, and much cleaner in terms of cutting, yet without using materials that were of concern. On top of all that it also is about 20 to 30% lighter than HIPS, so that allows you to make packages and make them thinner, use less materials, and therefore be more sustainable—all of which were all things we heard that we heard as marketplace needs.

We started making that product and worked closely with Pacur to understand more about how to extrude it properly. And we worked with Plastic Ingenuity to better understand how it thermoformed and what they needed. That's what brought about Eastalite, which was launched in 2014. We’re now we're at a point where the product is in the field and gaining some momentum and winning applications.

Banko: Once the resin was developed, Pacur went through multiple trials to see whether or not that resin would extrude to the point where we could actually do it efficiently, effectively and repeatably.

One of the things to keep in mind is that the medical industry is very resistant to change. There's a lot of risk involved with change. We needed to make sure that this product was going to be able to be produced time and time again, and that it followed all the required ISO standards.

The other thing we wanted to offer the industry was a product that wasn't too much different from what they're used to seeing. They've been using Eastar™ 6763, extruded by Pacur, known in the industry as PETG, for a long time. What we were able to do is take Eastman's multi-layer structure with virgin PETG on the top and bottom, with a foamed version of that in the middle. So we’re not really introducing a new product, per se, but rather an extension of an existing product. That, I think, is very comforting for the medical industry.

Once we felt comfortable extruding this material, it was time to roll it out for our customers, the thermoforming companies, to try it. We sent out rolls of material to different thermoformers, one of them being Plastic Ingenuity. They tested the initial versions, showed parts to the industry, and then came back to us with more specific needs based around gauges, widths and other specifics.

Crosby: Our early-stage development was in the form of sampling various rolls and densities on existing tools that we had, just to see how it thermoformed. Then from there, we worked on the development of some unique tools, using aggressive undercuts and unique snaps in our tooling, just to see how far we could push the limits of this material and get a feel for the applications.

As we ventured further into this, we discovered there were certain applications that were a good fit for this material. There's a big push in the medical device industry to put a tray in a pouch. For applications that put trays in pouches, typically it's a rigid tray, such as PETG or HIPS. Oftentimes there are sharp edges on those trays. In some cases, with a lightweight device, it's not a big deal and it doesn't cause any issues. But with a heavier product it can cause some issues and damage the pouch. If that happens, the device maker then needs to go to maybe a nylon pouch or a heavier substrate.

For example, let’s look at a catheter tray. It's about 60-inches long and goes into a pouch. Because Eastalite is a foam material, it has a thicker flange from a gauge perspective, and it's fairly soft. As a result, when this goes into a pouch, we don't see any of the concerning abrasion issues. From our perspective, that has been one of the really great benefits and an application that has found a lot of value to existing customers.

Regarding costs, depending on the material that was previously used, if it was a 6763 clear material, definitely there's a cost savings with the new material because of the yield advantage in the formed material. From a HIPS perspective, what we have seen is there's a slight uptick in cost from HIPS.

From an MDM perspective, a HIPS tray could potentially dust during vibration, so Eastalite provides value from that perspective. This Eastalite material trims very well, and it trims very clean. So if a company has challenges processing HIPS, they're going to find some advantages from using the cleaner Eastalite.

Another area that customers are finding value in the new material is in shipping trays. There's a couple reasons for that. First, the lowest-cost work in process tray out there right now would be typically a HIPS material, or PET. Eastalite provides some cushioning effect that a rigid material wouldn't.

Crosby: We were able to get steep undercuts out of this material, as opposed to what you would normally see out of a high impact polystyrene. One of our goals in the early trials was to see how far we could take an undercut that would not normally strip in PETG or in HIPS. We were able to successfully get very aggressive on undercuts with Eastalite. From a molding perspective, when you have a very heavy undercut, it's sometimes very difficult to remove it off of the mold. That was one advantage that we saw in our process, that we could remove aggressive undercuts from the mold much easier than a traditional rigid material.

Then from a medical device customer's perspective, with that heavier undercut, we can provide a little better containment on products that you previously couldn't. But what we notice is that because there's still some give in that tray with that foam material, you can still remove that without excessive pull forces—we reached a happy medium, where you also gain extra protection and containment.

We’ve gotten to the point in the development process where we've received gotten feedback from the field, which has been very positive. MDMs are very excited about some of the potential applications.

The Qfinity autoinjector platform provides a sustainable with a connected option for use in both clinical trial development and commercial supply.
Jabil
Jun 2nd, 2022

The guidance explains the required steps in processing flexible and semi-flexible endoscopes and accessories to ensure they are safe for patient use.
Mar 8th, 2022
More in Medical device/Packaging