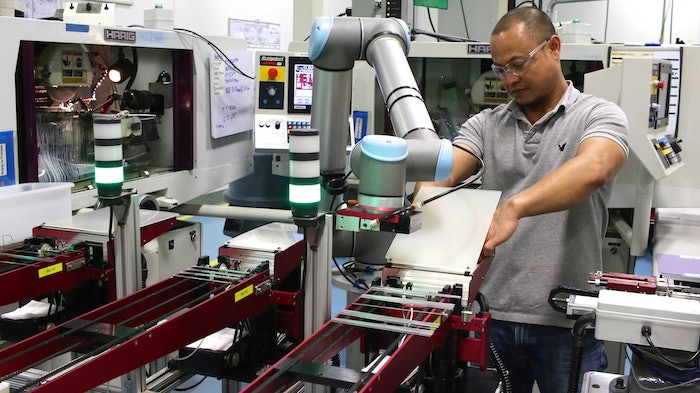 A Universal Robot operates within a mini work cell at Tegra Medical.

When you think of robots in production applications, large-scale operations in the automotive and packaging industries tend to jump most quickly to mind. With production facilities in Boston, Memphis, and Costa Rica, medical device manufacturer Tegra Medical may not be a very small operation, but its mini work cells where operators interface with automation are. As a result, typical industrial robots were not a viable option for the company when it sought to extend the automation of its production operations. Small, collaborative robots, however, proved to be the right fit.

Driven by a need to lower costs and speed up production with high-volume robotic technology, Tegra Medical was looking for a scalable robotic platform that it could implement, engineer, and maintain on its own without the need for a third-party integrator. Based on the Tegra Medical’s cost, implementation, and use parameters, Universal Robots addressed “all of those areas,” says Hal Blenkhorn, Tegra Medical’s Director of Engineering. Plus “the accuracy and the design [of the Universal Robots were] far above and beyond what we thought anyone else in the market had.”

To date, Tegra Medical has built three robotic workcells. The first two cells produce artery closure devices and each uses a UR5 robot for machine tending. The two UR5s pick up blanks from the feeder, move them between a lathe, a grinder, and a conveyor in a cycle that now takes only 10 seconds to complete compared with 22 seconds using manual labor.

He notes that, being in the medical industry, Tegra Medical can’t just “change our process without notifying our customers and going through validation activity. But by replacing an operator with the robot, we just changed the handling of components between the processes. That was a huge win for us.”

Blenkhorn also points to the company’s improved product quality resulting from the UR5 and UR10 implementations. “With the UR robots, we only get a few rejects per day. Before, that number was significantly higher,” he says.

In addition to the higher levels of quality helping to dispel Tegra Medical’s concerns about the Universal Robots’ accuracy, the company’s concerns about repeatability have also been alleviated after having the first UR5 workcell produce its one-millionth part in less than a year.

Blenkhorn notes that, given the robots’ low costs, ease of implementation, and engineering, as well as their high levels of accuracy and repeatability, the average return on investment period for the robots has ranged between just three and six months.

Watch a video of the Universal Robots UR5 and UR10 in action at Tegra Medical.