Scientists have developed a wearable artificial graphene throat that attaches to the neck and transforms throat movements into sound. 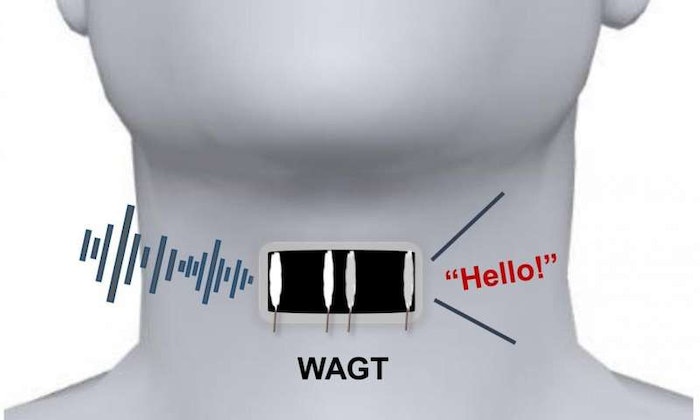 A recent TechXplore article discussed a new wearable that aims to help mute people speak. The device is called a wearable artificial graphene throat (WAGT), and it adheres to the wearer’s throat like a temporary tattoo and transforms throat movements into sounds. Devices that detect and measure movements on skin such as pulse and heartbeat have been around for a while, but they were unable to convert these motions into sound and they were too rigid to be worn for long periods of time.

The team behind WAGT used laser-scribed graphene on a thin sheet of polyvinyl alcohol film to create a flexible device roughly the size of a thumbnail that comfortably adheres to the wearer’s throat. Electrodes connect the device to an armband containing a circuit board, microcomputer, power amplifier, and decoder. When the wearer silently imitates the throat motions of speech, the device converts the movements into emitted sound. The team believes that in the future mute people can be trained to generate signals with their throats that the device could translate into fluid speech.