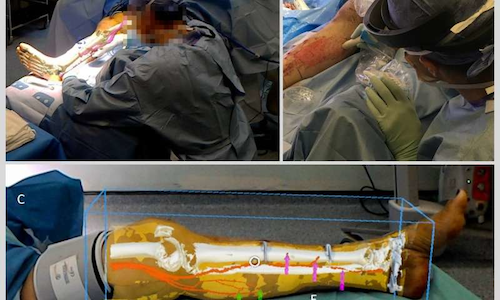 Performing surgery is a messy to-do, but according to a recent Medical Xpress article, surgeons can employ augmented reality to focus on the task at hand. A team of researchers at Imperial College London worked with surgeons at St Mary’s Hospital to show that the use of Microsoft’s HoloLens headsets can assist with lower limb reconstructive surgery.

HoloLens is a headset containing a computer; when the wearer looks through the attached visor, they see a combination of reality and computer-generated objects. In this case, the holograms were CT scans illustrating the position of bones and key blood vessels laid onto the patients’ legs. This helped surgeons locate and reconnect key blood vessels so that oxygenated blood can reach the new tissue and improve the outcome.