MinION DNA Sequencer is the iPod of Med Devices

Oxford Nanopore’s portable DNA device can identify and profile microbes in great detail, and it fits in the palm of your hand. 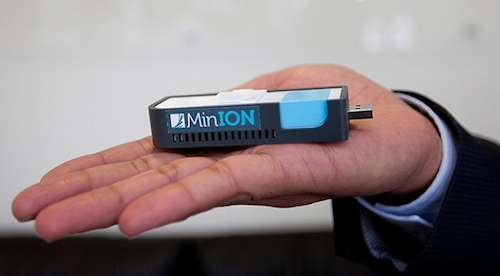 A recent article from MIT Technology Review highlighted the capabilities of Oxford Nanopore’s MinION DNA sequencer. The MinION is the only portable, real time device for DNA and RNA sequencing. Last June, a team of researchers transformed a bus into a makeshift laboratory and drove across northeastern Brazil in search of Zika-infected mosquitos to sequence its genome in their blood. The tool that enabled this real-time research was the MinION, which is roughly the size and weight of a deck of cards with a USB plug and costs just $1,000.

The product only generated $6 million in sales last year, but Oxford is privately valued at around $1.5 billion. It’s not uncommon for the company to give away supplies needed to operate the instrument in hopes that its user base will develop new applications that will increase demand for the technology. The global high-speed DNA sequencing market is roughly $3 billion a year, and it’s dominated by Illumina whose machine costs $1 million, weighs 500 pounds, and is the size of a large filing cabinet. If history has taught us anything, it’s that technology that makes things smaller, cheaper, and more efficient can disrupt industries.