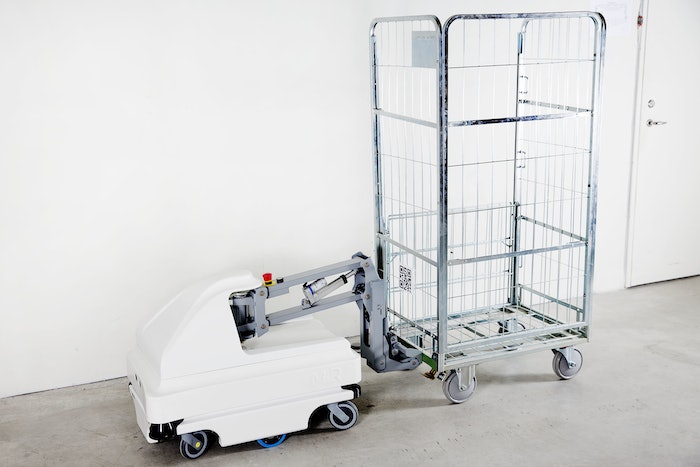 Mobile Industrial Robots, a next-generation developer and manufacturer of autonomous mobile robots, announced distribution agreements for its MiR100 robot in which industrial automation distributors in North America cover all major regions and are trained, certified and selling MiR100s.

MiR100’s capabilities make it more flexible, efficient and cost-effective than traditional automated guided vehicles (AGVs) with a repayment period of less than a year. Instead of having to build tracks on the floor for the robot to get from point A to point B, the adaptable MiR100 navigates safely around obstacles in a dynamic environment. On average, MiR100s drive 4.6 miles per day and can carry up to 220 lb. With the patented hook module attached, the autonomous robot tows up 660 lb.

MiR100 can be used within manufacturing facilities, as well as reaching into many vertical markets such as healthcare, logistics centers, airports, and hotels. MiR100 is suitable for large facilities that require a fleet of units to collaborate and interact to accomplish material handling/logistics operations.

MiR Mobile Industrial Robots (MiR), headquartered in Odense, Denmark, was founded in 2013 by veterans of the Danish robotics industry. MiR develops and markets the MiR100, the most advanced mobile robot for small-task indoor transportation of items in the manufacturing and healthcare markets. MiR has quickly established a wide distribution network in countries such as Germany, Australia, Italy, Singapore, Hong Kong and the U.S. quadrupling company growth from Q1 2015 to Q1 2016. MiR100 is currently used in 26 different countries with multinational, prominent manufacturers such as Leoni, Flextronics and Continental among the users of the unique Danish logistics robots.

With its batch size range from 10 to 100%, the TP R Optima perforated coating pan from Romaco Tecpharm covers a wide range of applications.
Romaco
Jul 13th, 2021

IMA has finalized in May the acquisition of the business operated under the trade name “Thomas Engineering”, a USA leading player in the tablet-coating equipment industry based in Elgin, Illinois.
IMA Group
May 11th, 2021