Is a 'tipping point' near for unit-dose prescription packaging?

Walmart and other pharmacies could push the use of unit-dose packaging in the U.S., says Peter G. Mayberry, executive director of the Healthcare Compliance Packaging Council. 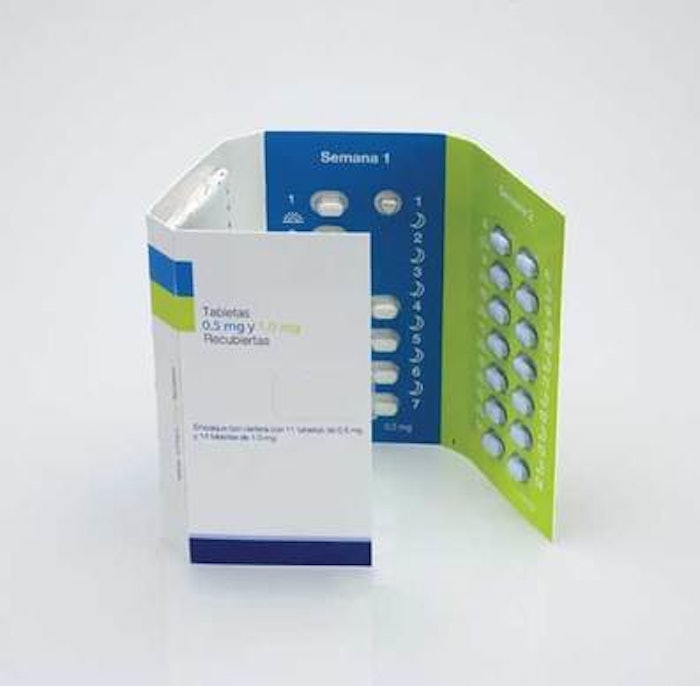 Walmart's Packaging Scorecard, the company's leading role in driving the use of radio-frequency identification (RFID), and its massive volumes make it a powerful force in packaging. Walmart's introduction last year of $4 generic prescription drugs, different versions of which are also being implemented by other retailers, could potentially alter the way these medicines are packaged in the U.S.

The HCPC is a not-for-profit trade association established in 1990 to promote greater use of unit-dose packaging by pharmaceutical manufacturers in the U.S., especially unit-dose formats that have features that cue people to take their drugs properly. With that in mind, it's understandable that Mayberry touts the Shellpak. “My understanding is that this will be very economical for Walmart,” he says. “Walmart will be able to reduce its dispensing costs because there is no need to repackage product in the pharmacy. With the Shellpak, all the pharmacist has to do is take it off the shelf and apply a label—much less work than is required with most of the other drugs behind the pharmacy counter. In addition, Walmart will be able to manage that portion of their prescription drug inventory much more efficiently. And, beyond all this, the Shellpak is truly 'consumerized' packaging in the sense that it offers Walmart customers several significant advantages over the amber vials that most other pharmacies use. The Shellpak, for instance, has features to help people take their medications. Shellpak also offers peace of mind to consumers that the drug inside the package will work as it is intended. Moreover, when the Shellpak won the HCPC's Compliance Package of the Year award a while back, one of the judges specifically commended the fact that the package is child-resistant, yet easy for seniors to use properly. The judge actually referred to it as the 'holy grail' of child-resistant/seniorfriendly packaging.”

Mayberry applauds Walmart's adoption of the Shellpak for other reasons, too. “The process has restarted conversations between consumer and pharmacist,” he says. “And consumers are going to have more security knowing that their prescription has not been exposed to the environment, or tampered with, or expired. And the Shellpak can serve as a vehicle for any sort of track-and-trace program intended to help prevent counterfeit drugs from entering the U.S. market.”

Unit-dose packaging is not as common in the U.S. as it is in Europe, Asia, Latin America, and other markets around the world. Mayberry says, “The packaging infrastructure for U.S. manufacturers is geared toward bottles rather than blisters. If you go to the XYZ Drug Company's packaging plant in New Jersey, you will most likely encounter a bunch of bottle-filling machines. If you go to the same company's facility in Ireland or Italy, you will find blister machines.”

Why is that? “As I understand it,” he relates, “it has to do with the way the pharmaceutical industry grew up after World War II on opposite sides of the Atlantic Ocean. Infrastructure in Europe was devastated after the war. There were contamination and transportation concerns, and product had to cross international borders on a routine basis. All those requirements and demands lent themselves to blister packaging for fairly obvious reasons. In the U.S., there wasn't the destruction or the international transportation concerns. There was also a pharmacy industry in the U.S. that, up until very recently, included the image of the pharmacist, mortar, and pestle.”

Mayberry says that up until the 1990's, he received tremendous pushback from the pharmacy industry when touting unit-dose packaging. He says pharmacies focused on repackaging and were very much opposed to unit-of-use or unit-dose packaging (see “Packaging classifications” sidebar, at right). “I always suspected pharmacists wanted their customers to think they were doing something behind the pharmacy counter other than just pouring medicines from big bottles into little bottles and applying a pharmacy label,” he says.

Other limiting factors for unit-dose packaging

Infrastructure issues have slowed the use of unit-dose packaging in the U.S. So has concern over the Poison Prevention Packaging Act of 1970. Mayberry says, “The United States is also unique in that we are one of only a few countries in the world that requires prescription drugs to be dispensed by retail pharmacies in 'special' packaging. That is, virtually all Rx packaging offered in the U.S. market must be capable of passing a test protocol overseen by the U.S. Consumer Product Safety Council [CPSC] that is intended to demonstrate that the package is difficult for children to get open, but not too difficult for older people to use. These child-resistant/senior-friendly packaging requirements did not cause prescription drug manufacturers in the U.S. too much concern for decades because they shipped most of their product in bulk containers and, legally, left it to the pharmacy industry to transfer the drugs into amber vials with caps that met CPSC regulatory requirements. When a drug manufacturer elects to use a unit-of-use or unit-dose format, however, it must be mindful of requirements under the CPSC regulations. Fortunately, compliance with CPSC regulations has never been easier, and there is no reason for manufacturers to cite these regulations as a barrier to adopting complianceprompting unit-dose formats.”

A third factor limiting the use of unit-dose packaging, according to Mayberry, was outlined in a 2007 report published by the Institutes of Medicine (IoM). “There are virtually no government requirements that prescription drug manufacturers distribute their products to the U.S. market in anything other than bulk containers. Lacking any requirements to ship product in unit-ofuse or unit-dose formats,” Mayberry continues, “manufacturers don't do it. After all, it is slightly less expensive for manufacturers to ship product in bulk containers.”

Lastly, Mayberry says that consumerbehavior that has a lot to do with packaging differences on opposite sides of the Atlantic Ocean. “Consumers in the European Union tend to be far more demanding than their counterparts in the United States,” he explains. “I have repeatedly heard representatives from the pharmaceutical manufacturing industry say they don't use compliance-prompting formats in the U.S. because there has been no consumer demand for them to do so, whereas many Europeans would leave the pharmacy empty handed before they'd accept a prescription that had been repackaged.”

Taken together, therefore, Mayberry paints a picture where the pharmaceutical manufacturing industry in the U.S. grew up distributing their products in bulk containers, and have historically cited regulatory concerns, lack of consumer demand, and increased cost as reasons why they do not use the same packaging formats in the U.S. as they do for the same products sold almost everywhere else.

Add to all this the fact that pharmaceutical firms have invested considerable finances in developing high-speed bottle-filling lines in the U.S., and a big question arises: Won't it be difficult for unit-dose packaging to make inroads, especially in difficult economic times?

“That's where Walmart comes in,” says Mayberry. “I think the recent announcement that Walmart is incorporating the Shellpak into its $4 generic drug program could be the tipping point in a shift from bulk distribution of drugs for the U.S. market into compliance-prompting unitdose formats. Some of my peers, in fact, debate whether we have already passed that tipping point, or if it is just right around the corner. Either way, there is general agreement in my industry that pharmacies, especially the major chains, are beginning to realize the benefits of unit-dose packaging. It shouldn't be long, therefore, before they collectively start saying to the pharmaceutical manufacturers, 'You do this in the rest of the world, why don't you do it here, and why don't you do it for us?' Walmart started asking this question several years ago and was frustrated by the answers it got. So the company went one step further and, figuratively, said, 'Well, if you branded drugs manufacturers won't do it for us, we are going to find someone who will do it for some of the generic drugs we sell.' And the thing about it is the economics are there to show how Walmart can do this profitably. It truly is doing well by doing good, for everyone.”

Looking ahead, Mayberry says that what's happening at Walmart and in the chain drug stores in genearl is very important, but he also points to the new Medicare Part D program as a potential driver for greater use of compliance-prompting unit-dose formats in the U.S. Under this program, the U.S. government is paying for prescrption drugs under Medicare for the first time, and as Mayberry explains, "Now that taxpayers are paying for prescription drugs provided to senior citizens, there is a big interest in the federal government to ensure those drugs are taken properly so they provide their intended benefit. Even before the law went into effect, the U.S. Department of Health and Human Services commissioned a study at Ohio State University to determine if taxpayer money would be better spent if drugs were dispensed to consumers in compliance-prompting unit-dose packages instead of traditional cap-and-vial closures. As part of this study, OSU tracked a group of people who were all taking a specific anit-hypertensive drug. Some of the people in the study got the drugn in compliance-prompting blister packs while others got the same drug in standard pharmacy vials.

"Patient adherence with the drug regimen was determined through monthly visits to the pharmacy in which study participants were asked about their dosing patterns and had their blodd pressure taken. At the end of the study, it was demonstrated that those who received the drugs in a compliance-prompting unit-dose format were much more likely to refill their prescriptions on time and also saw much greater reductions in their blood pressure than those who got the same thing in a pharmacy vial," says Mayberry.

Other factors that encourage the use of unit-dose packaging:

With its batch size range from 10 to 100%, the TP R Optima perforated coating pan from Romaco Tecpharm covers a wide range of applications.
Romaco
Jul 13th, 2021

IMA has finalized in May the acquisition of the business operated under the trade name “Thomas Engineering”, a USA leading player in the tablet-coating equipment industry based in Elgin, Illinois.
IMA Group
May 11th, 2021
More in Packaging/Filling

Brenton and Orion responded to their customers’ needs by expediting the design and building of end-of-line packaging and stretch-wrapping systems as part of Operation Warp Speed.
Brenton
Apr 9th, 2021