These seven tips can help ensure a successful forming, filling, and sealing experience. 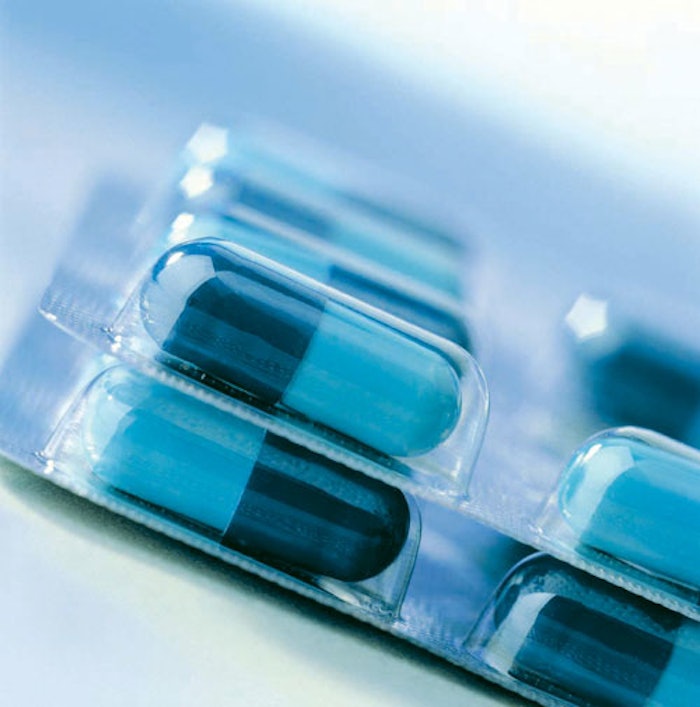 Different lidding structures require different machine settings (such as seal temperature, dwell time, and pressure), even if the heat-seal layer is identical. For example, unsupported aluminum foil will usually seal faster than paper-backed or child-resistant (CR) structures. That's because the heat has to travel through the paper, the PET film, and the aluminum foil before it reaches the heat seal.

Whenever possible, use shorter dwell times. Not only does this promote high line speeds, but it also avoids unnecessary exposure of the drug product to heat.

When using unsupported aluminum foil, the temper of the metal foil (soft vs hard) can play a crucial role in the performance of the package. Depending on the design of package and sealing tools, soft-temper foil can considerably reduce blister curl, especially when working with multilayer barrier webs.

The caveat with soft-temper foil is not to compromise the functionality of the typical push-through blister pack: Soft foil will usually work great as long as the contents are solid and sturdy (e.g., coated tablets, hard lozenges, chewing gum). Effervescent, fragile, or very small tablets, as well as soft gel capsules might not be well packaged in soft foil; due to its higher elongation at break, you might damage the tablet or the soft shell of the capsule before the foil ruptures.

Also, check for uniformity of the heat-seal layer. It should be glossy, clear, and resistant to abrasion. It should not block in the roll (sticking to the outer side of the next layer within the roll).

The coating weight should be right. Too little heat seal might compromise seal integrity, but “the more the merrier” doesn't apply here. When packaging moisture-sensitive products, remember that the heat-seal area is one more area where moisture eventually might sneak into the package. You want to minimize this by avoiding overly thick heat-seal coatings.

Materials that offer a wide sealing window as to temperature, dwell time, and pressure are a plus. Such materials give you more flexibility in your production process, change between equipment, set-ups, etc. Materials with so-called “universal” heat-seal layers (e.g., equally sealing to PVC, PVdC, and PP) offer increased flexibility in the regulatory setting and with any type of change, including post-approval changes to a New Drug Application (NDA) or Abbreviated New Drug Application (ANDA).

In-process QA is critical, but so is long-term control. Some sealing layers are prone to mature, especially over the first couple of days after sealing. Bond strength might be different 24 hours after sealing. A peelable seal might have become harder to peel or even permanent; a seal found satisfactory during in-process control might become loose. Do not entirely rely on your in-process control. Over a long time, the sealant might also lose its elasticity, especially when exposed to extreme ambient temperatures, and become brittle and compromise the package integrity.

Sealing to PVC is usually easy, because most everything sticks to it. The same applies to PVdC-coated films.

Sealing to materials other than PVC or PVdC can be a challenge. Most lidstock suppliers offer heat-seal coatings that seal to PP; especially barrier films such as PCTFE (Aclar®) laminates and COC-containing structures might require the use of specialty coatings to match the forming web with an appropriate lidding.

Good design principles are not only in line with the U.S. Food and Drug Administration's most recent moves toward Quality by Design (QbD), but also simply make sense for everybody who wants to do it right from the start. Sealing dies for solid oral dose drugs, especially those for moisture-sensitive products, should be designed with a minimum of 3-mm area between the product-containing cavities, as well as to the outer edge of the blister, date stamps, or perforations. This will minimize moisture ingress through the side (the cross-section) of the package, and limit the effect of micro-channeling.

Understand the impact that your sealing tool has on the material. A too-aggressive sealing die combined with high pressure and high line speed might lead to stress cracking of the lidding foil and compromise the seal integrity. Even worse, this might become noticeable only long-term: Even though the in-process testing for seal integrity (in pharmaceuticals it's usually a methylene blue bath) finds the seal OK, microscopic fractures in the foil might over time compromise the shelf life of the package.

Key characteristics of a platen sealing tool should be good flatness and appropriate knurl. Use pressure-sensitive tape to assure planarity of the tool. For best results, you may want to vary the type of knurl depending on the type of lidding you run. It also makes sense to vary the knurl depending on the web width. Use smaller knurls on a narrow web, since the air can escape more easily. On a wider web, use a slightly larger knurl to allow some place for the entrapped air to go.

Regularly inspect and clean your sealing die surfaces. Dirt or other residues, e.g., from overlacquers, inks, and paper particles, can build up over time, absorb heat, distort the knurl pattern, and lead to an uneven seal.

Both types of sealing tools have their pros and cons, and should be selected according to the most typical packaging application run at that facility. Platen sealing works especially well on wide web widths where sealing temperatures can be lower and dwell times are usually higher. It offers uniform seal pressure, which is especially important on paper-backed structures. Platen sealing machines often mean a massive mechanical system, which can mechanically challenge the foil.

Conversely, blister machines with rotary sealing systems frequently are high-speed equipment that operates with narrow webs. The nature of sealing by means of a rotating drum inherently means short dwell time—the sealing area is a thin line rather than a flat area. Since the heat-seal coating needs a certain temperature to bond, it will take higher pressure, higher temperature, and possibly even a foil preheating station to get a satisfactory seal, especially for multilayer structures such as CR lidding. Novel foil structures that combine the paper and PET into a white PET layer help to reduce this effect.

Avoid stress forming in the bottom web. Even though PVC is forgiving when it comes to forming, like all polymers, it has a “memory.” If you induce stress in the forming stations (e.g., by using too much or too little heat, or by using universal top molds), the thermoplastic blister material will tend to relieve any internal stress when it is reheated during the sealing process. This will cause movement of material, leading to micro channels that might form weeks or even months later, and eventually result in leakers and a compromised shelf life.

A simple way to check “stress” in sealed blisters is with polarized PET. Held at a 45-deg angle, a distinct coloration of the formed web will indicate stressed areas.

Further, less heat in the sealing process might help reduce blister curl, which is usually introduced during the forming process and displayed when the forming material's memory effect is evoked by applying heat a second time. Lastly, lower sealing temperatures also mean lower energy consumption, which is one more step toward a more sustainable, environmentally friendly manufacturing process.

During a typical production day, the cooling systems are subject to varying temperatures. In order to minimize the variation in the sealing parameters and maximize control of the process, it is recommended to provide separate cooling for the forming and sealing stations.

Leak tests can be divided into two groups: destructive and nondestructive. By far the most common and inexpensive destructive blister leakage test is the vacuum test using methylene blue. One downside is that there is no real clear protocol that is accepted across the industry, so the vacuum pressure and time applied varies from one company to another. Another caveat is that micro channeling is not evident.

Helium leak detection has a higher sensitivity than methylene blue; it is quantitative and gives an accurate measurement of the leakage, rather than the pass/fail criterion of the blue bath test. It is more expensive, though, as well as time-intensive. Other nondestructive tests include polarized polyester film to test for stress forming, modified CO2, ultrasonic, and laser testing.

Angela Roggenhofer is the sales and marketing manager for the pharmaceutical packaging business unit of Tekni-Plex.

A global pharmaceutical company improved output speed for 4-side-seal sachets of laxative powders by selecting a new packaging line—complete with remote installation. The system compacts stacks of sachets before transferring them to the cartoning machine.
Keren Sookne
Dec 1st, 2020
More in Packaging/Filling