For over 60 years, Heraeus Medical, a subsidiary of the technological firm Heraeus, has been producing bone cement in Wehrheim, Germany. Their latest development, the PALACOS® pro bone cement system, is manufactured in a new 2,800 sq m building that opened in the summer of 2018.

PALACOS is a prefilled, closed mixing and application system for bone cement that is reported to benefit operating room staff by ensuring clean, contact-free work while being faster to use than comparable products

Back in 2015, Dr. Britta Baer, head of supply chain at Heraeus Medical, and her team sought a suitable partner at ACHEMA for the machine project to assemble and package PALACOS pro, representing a new era in the field of cemented endoprosthetics. At the show, now-retired Ottmar Schneider, former sales director at Optima Automation, convinced Dr. Baer they could deliver.

The result is the largest system of its kind to be used at Heraeus Medical to date. Optima Automation developed a virtually fully-automated production process in which various components—including tubes, snorkels, the knee pressurizer, and the femoral seal—are fed into a thermoformed primary blister package, inserted in the correct position, and then fed to a secondary blister. 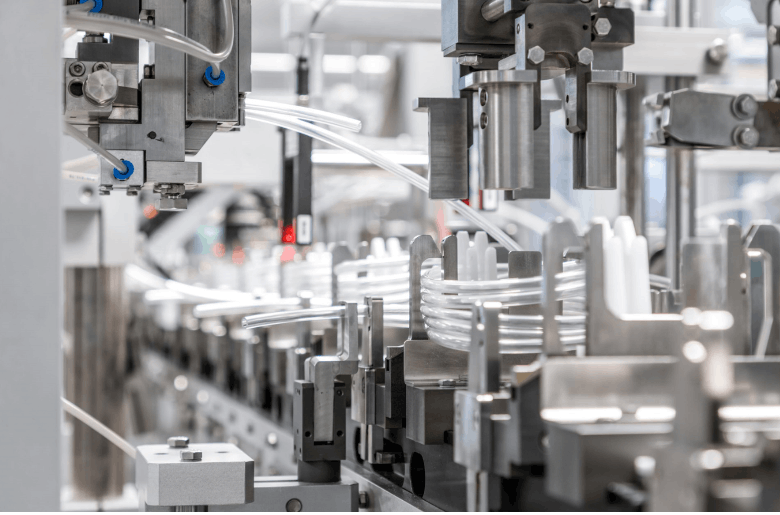 One of the first assembly steps that Optima Automation has automated is the winding of the tubes.

One of the first assembly steps that Optima automated is the winding of tubes, followed by connecting the tubes to activated carbon filters. Once assembled, the components are inserted into the primary packaging blister, produced by the first thermoforming packaging machine on the line. Here, Optima’s expertise in developing their own feeding units played a key role so that interfaces to the main machine could be designed optimally.

The primary blister is then fed to the second thermoformer where it is transferred to the secondary packaging blister, which is necessary due to the high demands placed on medical packaging. The sealing film is unwound and sealed onto the blister packs, at which point good products leave the system as fully loaded bone cement sets.

Dr. Baer says that Optima Automation has proven itself a reliable turnkey partner and has responded with flexibility to product modifications. In one example, the blister foil feed had to be re-routed around the corner because the product turned out to be bigger than planned. "Everyone's flexibility and equanimity was put to the test," Dr. Baer says.

Sample parts were only available relatively late in the process. Optima Automation continued with the design and remained open and agile when one of the feeder units had to be adapted at later stages.

Automating the feeding process for all components has minimized operator intervention, which improves process safety. One format is used, however, the set's composition can be customized including the size of the cartridges and the number and filling volumes of the ampoules. The design printed on the blister foil can also be changed at any time. 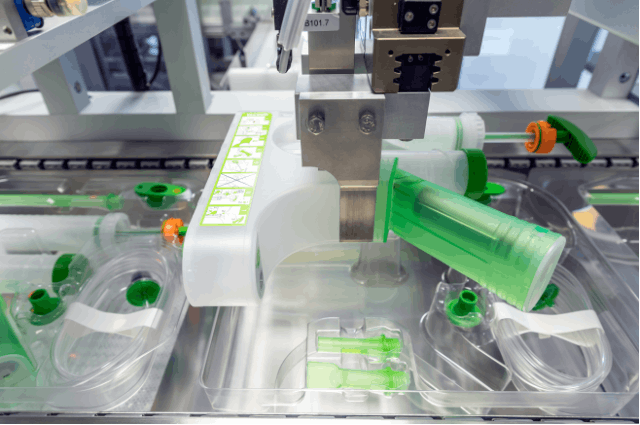 An Optima Automation machine inserts the components into the blister packaging.

"It only took two weeks to set up the huge system," Dr. Baer says. The final acceptance test at Heraeus Medical was successfully completed on schedule in July 2018.

Results lead to next project

Dr. Baer explains the reason for choosing Optima Automation as a partner was, among other things, "the chemistry was just right." A visit to Optima Automation in Fellbach also helped tipped the scales. Dr. Baer notes, "I knew that when dealing with Optima Group, you are working with a competent partner who has already installed many machines in the pharmaceutical sector."

Dr. Baer stresses other positives in choosing Optima Automation: positive cooperation with the thermoforming packaging machine manufacturer and the comprehensive training they offered Heraeus’ machine operators to prepare them to work on the line.

The ultimate sign of a positive experience, Heraeus Medical has a new bone cement line in the works, with filling system and production supplied by Optima Automation.