Edesia turned to x-ray technology to inspect a ready-to-use food that is expected to reach some 2 million malnourished children this year. 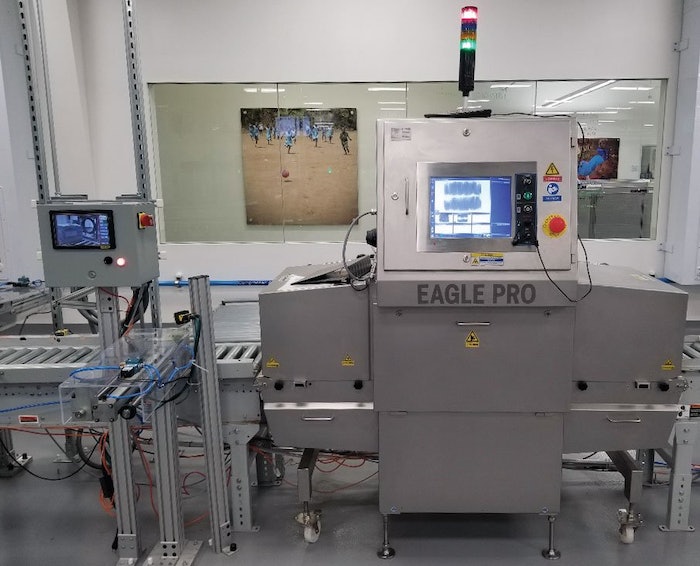 UNICEF and USAID challenged Edesia to create an x-ray solution for inspection of the RUF products and that could potentially set the bar for foreign material detection for the industry.

Edesia is a unique non-profit organization and social enterprise that manufactures specialized ready-to-use therapeutic and supplementary foods (RUFs). The organization was founded in 2009 in a partnership with Nutriset, the French company that pioneered the RUF Plumpy’Nut® in the late 1990s. Edesia’s founder, Navyn Salem, learned that 5 million children were dying every year from malnutrition, something that is preventable if there was simply more access to nutrition.

Today, Edesia’s 3-year-old, state-of- the-art Rhode Island plant manufactures a full line of RUFs designed to treat and prevent childhood malnutrition, namely Plumpy’Nut, Plumpy’Sup™, Plumpy’Doz™, and Enov’Nutributter®. Humanitarian aid workers deliver these products to malnourished children in developing nations around the world. Since the first RUF rolled off Edesia’s production line in 2010, more than 8 million malnourished children in more than 50 countries have been fed with its products.

Plumpy’Nut, the RUF designed to treat the most severe cases of malnutrition, is composed of peanuts, powdered milk, whey, sugar, vegetable oils, vitamins, and minerals.

Packaged in sachet-style film pouches, Plumpy’Nut does not require refrigeration, cooking, or the addition of water—especially critical in areas where these resources are often scarce. A pouch is simply opened, and then a child can eat directly from it. The pouches have a shelf-life of two years.

Inspecting entire cases at once

Given Edesia’s target population of undernourished and immuno-comprised children, food safety is of utmost focus and importance. One key element of this is foreign material detection. Edesia sought out a system that would meet all of its detection goals without slowing down the pace.

Instead of inspecting individual pouches prior to case packing, filled and sealed cases of pouches go through inspection. This is thanks to the Pack 550 PRO with a Hi-Ray 9 x-ray generator by Eagle Product Inspection, which was installed in mid-2018.

When he started his research, Edesia’s Plant Operations Director, Ronald Yanku, did not know of anyone in his sector who had successfully accomplished this before. It was so unusual that it first drew disbelief from the governing bodies that audit RUF packaging lines—UNICEF, the World Food Programme, and USAID. In fact, USAID and UNICEF challenged Edesia to create an x-ray solution for inspection of the RUF products and that could potentially set the bar for foreign material detection for the industry.

“In the past, no RUF producer had been able to prove that you could do this intense of a detection at a full-case level. The product itself is very dense, and when you have 600 in a single case, with the amount of void space between, and the amount of shadows, it’s a difficult task,” Yanku says. “The audit teams said that no one in our industry could do this, no detection system could scan either the 150 large pouches or 600 small pouches, through heavy corrugated cases, and still detect what it needed to detect. We proved to them that we’re able to do that without ever even stopping the cases. Therefore, our packaging line is much more streamlined, and everything goes through a lot more smoothly. In addition, it’s using most of same settings for each of multiple formats, so there aren’t any delays or any human intervention needed.”

This is possible because as the infeed conveyors feed the x-ray machine with sealed cases, sensors read the inkjet-printed barcodes identifying each case. This enables software to adapt the machine, on a case-by-case basis, to the disparate case formats—again, 150 large, 300 medium, or 600 small metalized polyester pouches within the same standard corrugated shipper—and provide the best inspection performance for each.

From metal detection to x-ray

While the ability to confidently inspect cases instead of primary packages is what differentiates Edesia’s packaging line, that wasn’t what drove the company to the Eagle system in the first place. In fact, when Edesia first opened its new facility, the company had used inline magnets in its packaging line to find contaminants. But considering the metalized format, and to hold itself to a higher standard that includes detection for non-ferrous materials like glass, bone, or rock (peanuts are grown in the ground), Edesia felt it was time to incorporate x-ray inspection into its packaging line. The company worked with Plant Automation Group, an equipment distributor in Brookfield, CT, to arrive at the Eagle solution.

“What really sets our quality program apart is moving away from metal detectors,” Yanku says. “We wanted to obtain at least a 3-mm detection rate for stainless and ferrous steel in our products, which we couldn’t get with metal detectors. But Eagle exceeded our expectations because their x-ray machine could detect down to 2.5 mm in our products. Now we can also successfully detect glass contaminants which was previously impossible with other detection methods.”

Limiting false rejects
“At the speed we go, which can exceed 250 cases per hour, if we had to shut down the factory every time we have a reject, or a presumed reject, that would be very difficult in our operation,” Yanku says. Not to mention that a false reject can mean having to repack up to 600 pouches, because it’s not just kicking one pouch off of the line. The Eagle allows Edesia to run at about a 0.6% reject rate.

This low reject rate wasn’t always the case on the machine. Edesia’s Process Engineer, Tim Pheland, says that early on, before it was fully calibrated and dialed in with the barcode-reading sensors, false rejects were a problem.

“Most of the time, we’re running at least two different products,” Pheland says. “We couldn’t find a middle ground where both products would be passed through without a large amount of false rejects. So looking into it and working with Eagle, who was very helpful, we found that a barcode reader, placed just before the x-ray on the line and talking to the x-ray, would be the best solution.”

“Now the machine understands completely what product is going through,” he adds. “We have eight or nine of our products with individual barcodes pre-programmed into the machine, so if the line started up tomorrow, and an unplanned product was on the line that I didn’t know about, the x-ray machine would still be able to run automatically. We can be confident in it, which is a big help.”

The x-ray has saved time and money in other ways, including once when the x-ray rejected a box of pouches that was later found to have an expensive piece of a production line machine that had broken off into the box. It hadn’t harmed any of the product, but finding the machine piece saved the company from two to three days of having to work in manual mode, as well as custom fabrication for the lost part.

Edesia has recently expanded and formed a new division of the company that will market domestic consumer versions of their ready-to-use foods. All proceeds will help Edesia in their fight against global malnutrition. Because Edesia has been so satisfied with their first Pack 550 PRO, they are planning to purchase an additional Eagle x-ray for yet another new production line.

“Eagle’s excellent support staff educated our team,” say Tim Pheland, Process Engineer at Edesia. “And the training the employees received allayed all their fears. We perform weekly emission surveys and have proven that we’re operating at levels far below governmental standards. Even though a level of 500 mRems is deemed safe, Edesia is operating at only 100 mRems.”