Designed to aid compounding pharmacies in precise robotic picking of loose syringes, this Smart Table vision system is more than just an accessory. 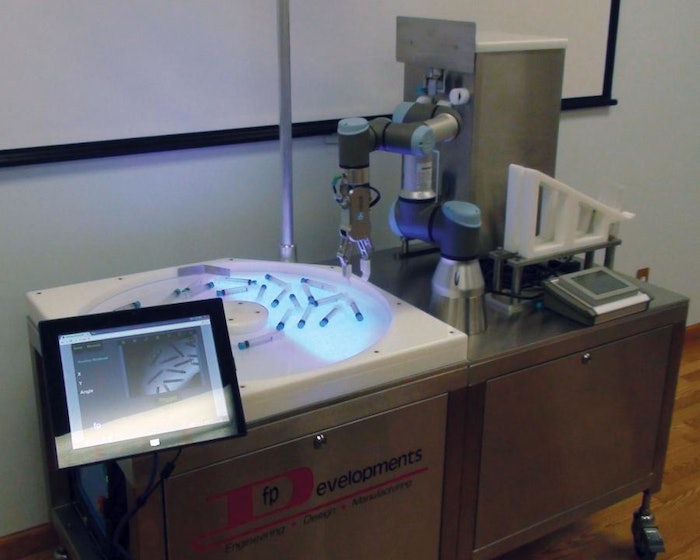 The Smart Table is backlit to take advantage of a smart vision system that takes chromatic shift into account for precision robotic picking.

FP Developments is a privately-owned pharmaceutical material handling OEM that has a 60-year history of providing equipment for syringe filling and handling, vial filling and handling, mark and verify, track-and-trace, unique device identification (UDI), and the like. The company has a strong installed base for its robotic syringe filler, which uses a Universal Robots UR-3 robotic arm to perform aseptic syringe filling and capping. The machine is primarily used in specific pharmaceutical environments like hospital pharmacies and clean-room pharmacies.

“In these environments, we frequently see pharmacy technicians loading the syringes by hand into the tray,” says Ryan Stote, Systems Integrator, FP Developments. “If you have a 200-syringe run, it takes the user quite a while to load those trays. So we came up with a solution to take the hand-loading out of it and free up the technician. We use the UR-3 because, like the name implies, it is truly universal. It is easy to integrate, and the user interface is intuitive.”

The company’s new Smart Table is marketed as an accessory to the filler. It is a backlit flat-surface table with RGB colors to demonstrate chromatic shift during object position detection. “If you’re doing something that requires a certain backlight color, you have the red, green, blue, and white,” Stote says.

He says many customers don’t understand chromatic shift, and how different wavelengths of light focus at different points. Position detection with the precision required by robotic syringe-filling can be affected by available light—the Smart Table accounts for this.

“With a system like this as a demo, you can trigger it once, show customers the position of the syringe, change the backlight, trigger it again, and show them the actual shift in position,” Stote says.

The table uses a Cognex VC200 vision system to guide the robot to pick loose, unfilled syringes from the table, then fill, cap, and load them into a tray.

“We looked around and chose the Cognex system at least in part because of the number of cameras it was capable of using, the processing power, and the fact that so much of the processing is done within the camera,” Stote says. “As you add each camera, processing gets quicker.”

The system photographs an array of syringes on the table, uses pattern-find software to locate a target on an appropriate syringe, and rotates the table until the suitable syringe is found. Then it sends the x, y, and angle coordinates to the robot, which picks and orients the syringe, doing a full spin under the camera to qualify it. The cap of a qualified syringe is then removed by the robot, which orients the syringe within the automatic filler and pulls on the plunger to fill. The syringe tip is capped, and the filled syringe goes into a magazine for distribution.

“We have programmed it in such a way where we can measure the syringes after we fill them,” Stote says. “We use a glob find [or filename pattern matchmaking] tool, then find the blot at the end of the plunger and the tip. Then we raise the exposure so the liquid doesn’t really bother it on the inside, and the graduations don’t bother it either. We still get enough contrasts with the blue-black light that we can still get a measurement off of it.”

After the system checks the fill and ensures that the tip cap, which seals in and protects the syringe contents, is on correctly, it laser-prints and applies the label, reads the barcode, and verifies the label and the recipe. Then it’s ready for use.

“One thing I do like about the VC200 is the interface used to program it,” Stote adds. “It acts like a cross between a spreadsheet and Cognex Designer vision software, and once you know it, it’s quite easy. Designer is a little more involved, and spreadsheets are a skill all their own, where with this, you get the best of both worlds. It’s easy to teach beginners, as well. If you’re used to working with logic block diagrams, this is very intuitive, and it’s quick.”

Stote also talks about the VC200’s easy-to-use recipe feature. “For a pharmacy technician, trying to select a recipe could be a little daunting because they see the full, actual program, lines of code, etc. With this interface, all they see is what you want them to see, just the recipes and pull downs and associated items.”