Brenton Engineering integrated a multi-carrier system (MCS) smart conveyor to transport shipping cases from the former to the loader in their medical device line. 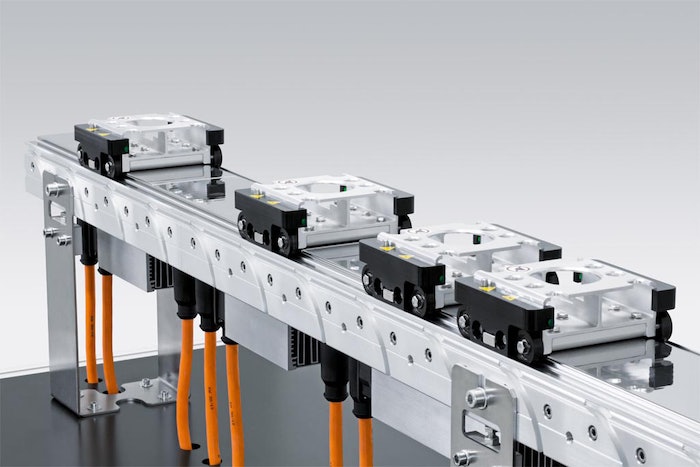 In one of the first applications of its type, Pro Mach division, Brenton Engineering, integrated a multi-carrier system (MCS) smart conveyor to transport shipping cases from the former to the loader.

The MCS (12), a joint development by Festo and Siemens, is employed in a Brenton integrated medical device line that includes an Ossid f/f/s machine and ends with sealed cases being palletized buy a six-axis robot. The MCS capability enables independent routing of one or more packages on individual carriers through the transport system, with an accurate repeatability of 50 microns. Some packages can be treated on a custom basis, while others follow a prescribed route, making the system able to accommodate both standard and custom products on a single line.

Each transport carrier in the MCS can move freely and independently from all other carriers. Carriers can be moved towards each other without the risk of collision and are easy to position. Also, several carriers can be grouped together and moved synchronously at fixed distances.

A lot of the company’s pharmaceutical applications are loaded robotically, usually into a carton or a case. Brenton was looking for something smart that could take the case to the load area and load it, oftentimes on the fly requiring servo motion at a constant velocity. They also needed to do line tracking.

“We were really looking for something to replace smart belts and race tracks, just because they’re complicated and tend to be a maintenance issue,” Mike Grinager, VP Technology, End of Line at Brenton, says. “The other thing with the smart track-type designs is they have inherent software that makes trackability and traceabilty much simpler. This is key for pharma and medical device applications. When you do racetracks and smart belts, all of that would be code that we’d have to custom-write to keep track of products throughout the system.”

There are multiple linear motion-driven carrier systems in the market, but a major draw to the Festo-Siemens MCS was its flexibility to only occupy portions of the track—it doesn’t have to be “smart” all the way around, and it blends seamlessly with more conventional conveyors. This makes it simpler and less expensive, according to Grinager.

“With many other offerings, if you want two feet of smart track, you have to buy the whole loop. But for us, most of the time, we’re just trying to transfer the cars and not have them need to be in a programmed state,” he says. Festo was able to offer conventional conveying for 80 percent of the track, using the smart track only where Brenton needed it positioned.

Prior to applying the MCS, those 20% “live” portions of track were where the case former would form cases into a set of flights, which would then be indexed at a certain cadence out onto the conveyor. Another set of flights and some metering belts would then pick up the cases off the conveyor and put each case into a flight to accurately position it for robot loading, with some line tracking.

“Now, we’ve gotten rid of the metering belt and the two sets of flights by having this multicarrier system,” he says. “You lose both the flights and all of the hardware it took to get it staged into the flights.”

As a bonus benefit, removal of these chains for flights and smart belts means simplified maintenance and a lot fewer moving parts, thus improving OEE for the end user, according to Brenton.

Linear motors drive and position the transport carriers in this system. Propulsion for each individual carrier in the MCS is magnetic. When energized, the electric windings of the motor (stator) generate a moving magnetic field. The carriers (the motor’s rotor) with their permanent magnets are pulled along with the linear movement of the magnetic field. In this process, there is a direct relationship between current intensity, magnetic field, and the feed force generated.

The integrated control concept allows control of both transport motions and motion-control functionality, as well as the coordination of other machine modules.

The simple, modular basic mechanical system—consisting of linear motors, a base for the package to be carried on, and a roller conveyor—permits customer-specific configurations to be created and precisely matched to individual applications. The Siemens controller provides full integration of the control and motion control functions for the overall conveying system. In addition to the motion control of the transport system, the Siemens controller can also coordinate motion with other servo-driven machine modules such as fillers or cartoners. This considerably reduces the number of interfaces required and allows flexible integration of the complete system by the OEM.

The MCS incorporates options that are relevant to Industry 4.0, including the flexible electromechanical design for economic production down to batch sizes of one and decentralized sensors and intelligence incorporated within the work piece carriers and drives. An OPC-UA architecture interface enables open integration into Industry 4.0 host environments.