Said to be one of the world’s first, a fully automated line at Celesio UK assembles weekly trays of repeat prescriptions for LloydsPharmacy customers. 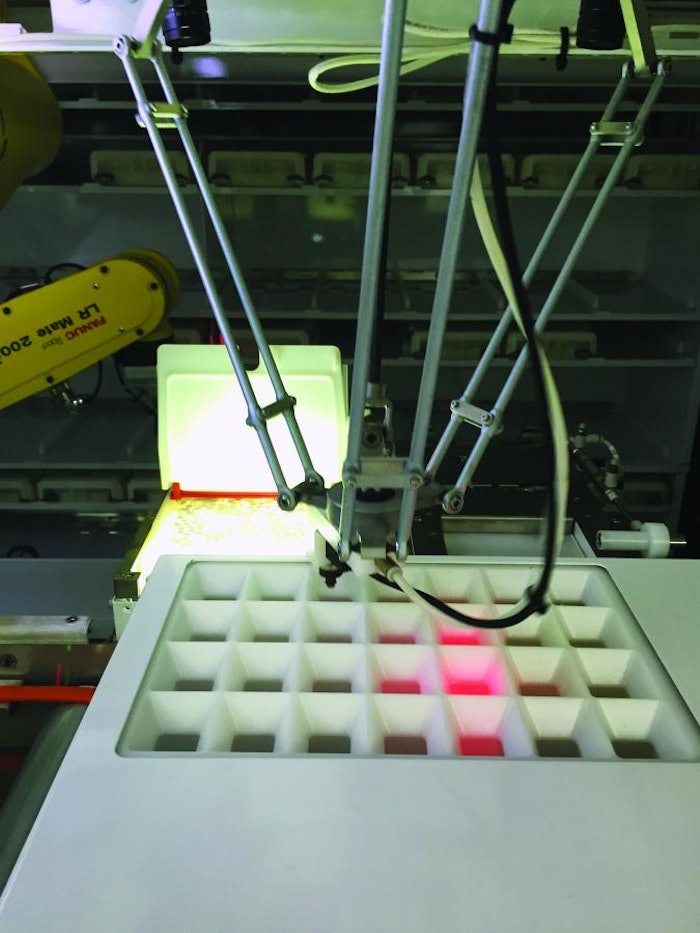 During tray filling, pills are dispensed by a robot through a grid that uses laser beams to verify correct pill placement.

Celesio UK, a leading provider of integrated healthcare services to the National Health Service in the U.K., is pioneering a new model of prescription fulfillment services—“hub-and-spoke” dispensing—with the help of one of the world’s first fully automated prescription assembly lines. Celesio UK is part of Celesio Group, a leading international wholesale and retail company and provider of logistics and services to the pharmaceutical and healthcare sectors. Among its services in the U.K., Celesio operates more than 1,550 LloydsPharmacy community pharmacies.

In 2011, Celesio began working with Cornerstone Automation Systems, LLC (CASI) to develop an automated prescription assembly line in its Warrington, England, facility. The line’s primary function would be to assemble and label weekly blister trays, known as Community Dosage System (CDS) blister cards, for individual patients and ship them daily to LloydsPharmacy stores.

The CDS blister card, which has been widely adopted in the U.K. as a way to ensure patient adherence to medications, consists of a tray with 28 blisters, each capable of holding multiple tablets or capsules. The tray is divided into the seven days of the week, with four dosing occasions per day—morning, noon, teatime, and evening. A front cover attached to the spine of the tray is printed with patient information, pictures of the tablets or capsules, dosing information, and drug facts.

Explains Mark Gillett, Director, Pharmacy Channel for CASI, “You might have 17 different medications, each one with a different dosing pattern throughout the week. So you’ve got to get it exactly right, with every medication placed in the right blister for the right times and the right days. That’s where it gets complicated.”

With the hub-and-spoke concept, a single facility, such as Warrington, will act as the hub, supplying a number of pharmacies, or spokes, with assembled blister trays containing repeat patient prescriptions. “We currently produce the [multi-dose blister] cards in the pharmacy, which is hugely time-consuming and very reliant on manual operations, such as staff de-blistering pills, manually adding pills to the blister, printing off backing cards, etc.,” says Danny McNally, Head of Prescription Assembly Services for Celesio UK.

By automating blister-tray assembly at the hub, pharmacists at the spokes will be freed from the tedious task and will have more time to interact with patients as well as provide value-added services, such as treating minor ailments and injuries and administering vaccinations.

In its pilot phase, the new automated line is made up of multiple modular components from CASI that assemble the blister and frame, fill the trays with the pills, apply a backing card to the tray, and add the cover, at speeds to 15 trays/min.

At the first station, the frame of the blister tray—a paperboard card die-cut to accommodate the blisters and printed with the days of the week—is placed face down in a carrier containing 28 blister-shaped slots. Next, the blister piece is placed on top of the card, with the blisters fitting into the slots of the carrier, and the open sides of the blister facing up. These components are picked and placed into the carrier by a Fanuc LR Mate 200iD equipped with end-of-arm suction cups.

From there, the carrier with blister tray is conveyed to the filling portion of the line, which consists of eight filling modules, each stocked with hundreds of different medications held in specially engineered canisters. Depending on which medications must be dispensed into the tray, the carrier may stop at multiple stations.

When the blister tray reaches the correct filling station, it stops under a grid with 28 holes. To start the filling process, a Fanuc LR Mate 200iD six-axis robot uses a fork mechanism to pick up a canister holding the required pills and place it on a platform. Canisters are stored on a vertically rotating carousel with 10 shelves that can hold up to a maximum of 300 canisters (420 in an extended carousel), or 300 different medications, depending on the mix of canister sizes. When a filling module is in use, there will be one canister on each of two platforms—one that is actively being picked from and one that is on standby.

To prevent operator access to the pills—which can be controlled or non-controlled medications—the canister is designed with a special locking mechanism that can only be unlocked when placed on the platform. When the medication is ready to be picked, the lid of the canister is lifted using a proprietary technology from CASI. Once the lid is open, a Fanuc M-1iA/0.5S four-axis delta robot picks a single pill from the canister and places it through the 28-hole grid and into the proper blister in the tray, then repeats this picking process, as necessary, to place all pills into the proper blisters in the tray.

Several inspection technologies at the point of filling ensure the robot is correctly picking whole, unbroken pills and is dispensing them into the blister tray. First, a backlight is applied to the canister to produce a silhouette of the pills inside. “The robot’s vision system has been trained to look for a certain form and dimension of the pill,” explains Gillett. “If it sees one that fits that form and dimension to within a programmable tolerance threshold, the robot will pick it up and place it into the blister card. This is important because you don’t want to be dispensing partial pills and counting them as whole, or even partial pills that you don’t count at all.”

When the robot drops a pill through the grid into a blister, the pill crosses a laser that is shot across the opening of the grid. The sensors detect that the pill has positively broken the plane of the laser and has gone into the card. “If we detect that something has broken that light at a time when we’re not dropping a pill, it also flags that blister to be checked by the on-site pharmacist, in case a foreign substance has dropped into the blister,” says Gillett.

A third way the system checks that a pill has been correctly picked and placed is by monitoring the vacuum pressure in the picking tool, which changes when a pill is picked up and again when it is released. Says Gillett, “A lot of effort has been put into making sure we can get an accurate fill every time—no extra pills, no missing pills, no pills in the wrong blister, because this is a safety issue.”

Once a canister is emptied of all viable pills, the LR Mate 200iD robot in that module places the canister on a conveyor that carries it to the end of the line where it is placed in a queue before being picked up by a mobile robot and brought to the replenishment room. Referred to by CASI as the Automated Canister Replenishment Vehicle (ACRV), the Lynx mobile robot from Adept incorporates a locking system that prevents the unauthorized removal of drugs from the canisters inside. The ACRV also delivers filled canisters to the line, where they are automatically conveyed to the appropriate filling module and placed in the carousel by the LR Mate.

Meanwhile, on the prescription assembly line, after a blister tray has passed through the entire filling line and all of the medications associated with that tray have been dispensed, the tray is conveyed to an inspection system. If the tray is correct, it continues to a station where a backing card is heat-sealed to the tray.

In the next step, a cover and spine are attached to the tray. The cover protects the blisters and, at the next station, is printed with information on the drugs inside by a Videojet DataFlex 6420 thermal transfer overprinter. “It prints the information on-demand for that specific customer and includes two color pictures of each drug showing two different angles, dosing information, drug facts, and more,” says Gillett. “It’s very well organized.”

Guiding the entire line is a modular end-to-end pharmacy software system from CASI, web-based SolidSuiteRX. Says Gillett, “It is probably one of the more sophisticated software systems I have ever worked on. It includes a lot of detail. But we try to make it so that operators can understand it and support it in the long term.”

As of July 2016, Celesio was in the final stages of ramping up production on the CDS automation line.