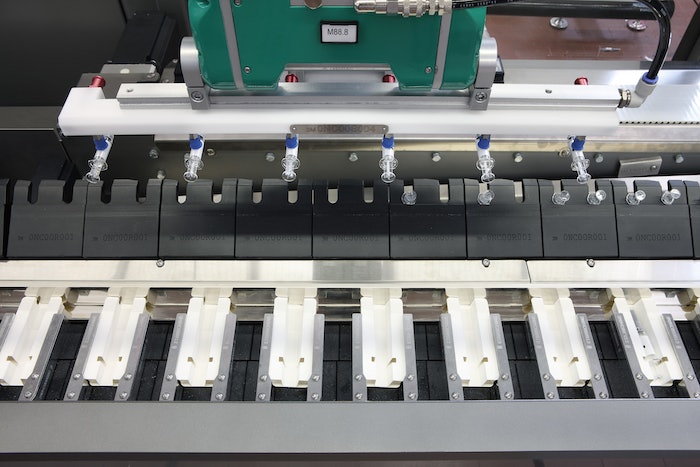 Marchesini Group developed a custom-built solution for a major Chinese pharma company using the horizontal continuous-motion cartoner MA352 equipped with specially designed magazine units for feeding trays at high speeds, along with two robotic infeed systems, one for erecting the trays and one for feeding syringes.

The mono-material paperboard tray is in great demand on the market because it complies with sustainable criteria that are becoming more important in pharmaceutical packaging. To protect the delicate product, Marchesini devised a tray with an internal structure that holds the syringe firmly in place throughout the entire packaging process.

The MA352 with Robcombi is a compact, reliable, and flexible robotic packaging system. Some of the strengths and benefits include the following:

• Speed: Combines the horizontal cartoner, MA352, with magazine feed units (from two to eight), capable of reaching production rates of up to 400 syringes/min.

• Robotic infeed systems: The cartoner’s two Robocombis use a three-axes robot with vacuum pick-up head for flexibility and reliability. The first Robocombi first picks up the trays fed from the magazines, erects them, and places them in the bucket chain of the cartoner with continuous motion. The second Robocombi picks up the syringes, rotates them 90 degrees to position them horizontally inside the formed trays. Both robots are controlled by a single PC. After the syringes are placed in the trays, the trays holding the syringes can be packaged either individually or grouped in layers, based on the customer’s specific requirements.

• Machine’s layout: The MA352 is compact and built entirely with balcony design, making it accessible and visible, with quick changeover times and minimal maintenance.

This solution satisfies the specific production and packaging requirements of delicate products such as syringes, and is well suited to handle a variety of difficult applications requiring reliability, flexibility, and speed.