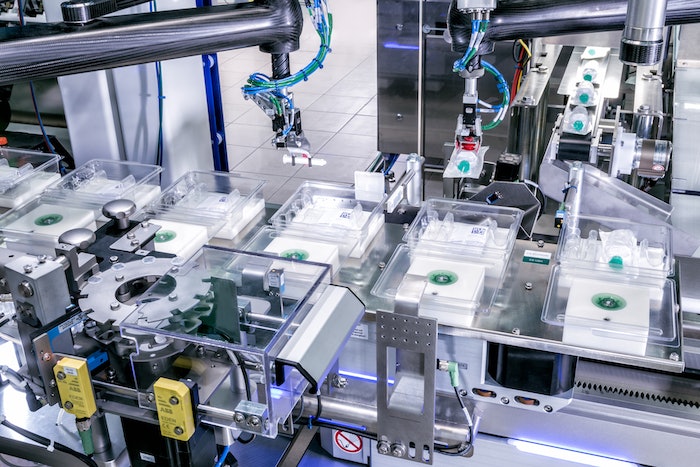 An F4 pick-and-place robot takes the suspended piston rods from the starwheel. With a horizontal tilting motion, the robot places the piston rods. (Photo provided by Schubert-Pharma.)

Kit packaging requires that its various components be precisely compiled, aligned and packaged. For an Italian pharmaceutical company—that prefers to remain unidentified—a turnkey packaging system is doing just that at its facility in Switzerland.

Nicknamed the “Mustang” by the company for its tenacity, adaptability, intelligence and spirit, the turnkey system from Schubert-Pharma provides a high-level communication system that integrates barcode scanners and cameras that check data on various product labels to ensure they are correct before loading them into clamshell trays. The Mustang system has increased the company’s capacity, allowing it to reduce labor costs while safeguarding its validated processes.

The pharmaceutical company employs approximately 3,300 people globally and annually invests about 10% of its sales in medical product research. The products are mainly used for diagnostic purposes in ultrasound, CT and MRI scans.

The combi-kits compiled and packaged on the Schubert-Pharma system include a contrast agent that is used in ultrasonic examinations. When the agent is administered, structures in the liver, pancreas and kidneys can be detected during scans. This permits identification of any differences or irregularities, which is particularly important in cancer diagnoses.

The entire project, from the customer request to the installation of the machine, took about two years. Previously, all other secondary packaging processes were done manually, with the exception of labeling primary products, syringes and vials.

Major benefits of the Mustang system include the precision with which the components are positioned and held in place, ensuring the product is well protected, and the communication system, which ensures that the product can be tracked in order to prevent possible batch mixups. A single-sourced system enables, for example, the infeed of the various individual components to be efficiently integrated into the machine design.

With the exception of the operators feeding the system with materials, the packaging process is now fully automated. It consists of tray loading, labeling and cartoning.

First, trays are taken from a stack and positioned on a single-axis robot that’s referred to as a transmodule. Product leaflets are automatically placed in the trays from the same storage area, saving valuable space within the facility.

In the next step, piston rods are added to the tray, with an F4 pick-and-place robot taking the suspended piston rods from a starwheel. With a horizontal tilting motion, the robot sets the piston rods down. Next, a centrifugal sorter is used to separate out transfer systems, which deliver syringes from one process to the next on the equipment.

An F4 robot positions the transfer systems in front of a camera to verify the product information on the labels. Only if the information matches the pre-set data are they added. In case of a mismatch or a reading error, the [device/product] transfer systems are rejected.

In a third step, a rotary plate feeds the vials with the freeze-dried contrast agent into the system. Here, an F4 robot places the vials on a turning station in front of a camera, which detects and verifies the variable data on the transparent label. If the data match the current production batch, the robot adds vials to the tray.

The next component, a Water for Injection syringe, is subsequently placed in the tray once the variable data on the label has been read and confirmed as correct. These syringes hang from a vibrating container and are fed into a starwheel where they’re placed precisely into the trays by means of a finger flange aligned parallel to the base and top of the tray. The clamshell is then closed and conveyed to an outfeed belt.

Once the clamshell tray is filled and closed, a standalone labeler applies up to three labels: a container label that holds key variable data; a tamper-evident label that guarantees content integrity; and a country-specific label. A Bollini (or vignette) label can also be attached to the underside of the product.

The cartoning process then begins as the blank is removed from a stack and the carton is erected. The incoming labeled clamshell trays are pre-grouped and transported to the loading station by an F4 robot. Once the cartons are constructed and the clamshells placed inside, a label with variable data is printed and applied to the carton, which is then sealed.

Looking to the future

The new machine concept offers the pharmaceutical manufacturer flexibility in the final packaging, allowing easy implementation of combi-kit formats without the need for any major changes.

The company’s site manager notes, “I was excited about the machine from the start. We are anticipating rising production figures in the future. I’m looking forward to seeing how our machine, which we call the Mustang in-house, will grow. The work the Schubert-Pharma team did was impressive and innovative.”

Editor's note: Edited from an article from Schubert-Pharma.