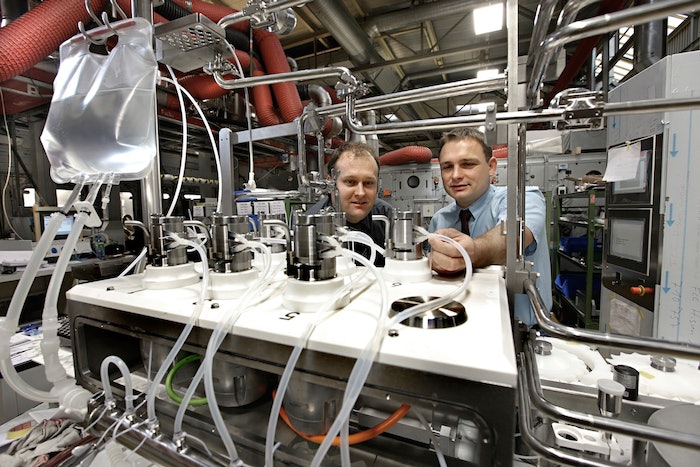 With the Bosch filling line, Boehringer Ingelheim can fill and close up to 400 containers/min, ranging from vials to single and double-chamber cartridges. Here, workers check the disposable tubes of the filling system.

Microbes follow people everywhere—even into the highest-grade cleanrooms. Isolators can provide a remedy by separating people, machines, and pharmaceuticals to ensure the highest purity standards for the aseptic manufacture of biopharmaceuticals.

Equipped with filling and isolator technology from Bosch Packaging Technology, the facility was recognized in the equipment innovation category for the successful implementation of a flexible and transparent production facility for biopharmaceuticals. The plant uses aseptic manufacturing, providing flexible and transparent production of biopharmaceutical products in all important dosage forms.

Boehringer Ingelheim is among the world’s top 20 pharmaceutical companies, focusing on research, development, production, and marketing of high-quality therapies for use in human and animal medicine. In Biberach, Boehringer Ingelheim operates Europe’s largest facility for the development and manufacturing of pharmaceuticals with biotechnologically produced active ingredients, both for its own business and for contract manufacturing.

To increase its flexibility and capacity at this site, the company decided to expand and modernize the production of biopharmaceuticals. After two years of concept development and design studies, the company initiated an ambitious project involving the construction of two ultramodern filling lines with a joint connection to two freeze dryers in an existing production building.

“Our goal was to create a flexible production area for the manufacturing of all important biopharmaceutical dosage forms. It was supposed to meet today´s and future requirements for aseptic processing while allowing transparent and flexible production,” explains Dr Friedrich Haefele, Vice President BP Fill & Finish Germany at Boehringer Ingelheim.

An 80-strong interdisciplinary project team worked on the implementation over a period of three years, together with international providers of pharmaceutical infrastructure and equipment, including project partner Bosch. The supplier developed and installed two complete filling lines with the corresponding isolator technology, consisting of an FLC line as well as an MLD combi line, designed to fill liquid and freeze-dried products into vials. The MLD combi line also processes single and double-chamber cartridges. In the latter, one chamber is for the freeze-dried active ingredient, and one for the solvent.

“Bosch provided the technology we needed: five separate isolators—from a single source and at a competitive price. The combi line enables us to switch between different container types and adjust production to meet both our needs and those of our customers,” explains Joachim Schweizer, Project Leader at Boehringer Ingelheim. “Thanks to the compact design, we also reduced our cleanroom footprint while integrating the systems into our premises.”

Additional components were provided by the Bosch subsidiaries Pharmatec and Moeller & Devicon. Pharmatec manufactured several sterile filtration modules to filter the product immediately before filling, as well as two mobile CIP (Cleaning in Place) systems. These are used to prepare the cleaning media for the filling machines. Moeller & Devicon automated both the transport and removal of the cartridges with several handling units.

The centerpiece of the first project phase is the FLC 4080, which enables Boehringer Ingelheim to fill and close up to 400 containers/min. Before being filled, the vials are washed in a Bosch RRN 3084 washing machine and then sterilized in a Bosch HQL 4360S tunnel.

Four separate isolator segments ensure aseptic conditions during the filling and closing process, as well as the loading of the freeze dryers. Glove ports and separate HVAC and decontamination systems make sure that staff and products are protected at all times. A VRK 6160B capping machine from Bosch with a capping capacity of 600 containers/min completes the 61-meter-long vial line.

While the vial line was undergoing the qualification process, the second project phase began. The combi line features an MLD 3081 filling and closing machine, which is also equipped with isolator technology. Apart from vials, it can fill and close single and double-chamber cartridges at a rate of up to 300/min.

Further components of the combi line are two RRN 3083 washing machines—one for vials and one for cartridges—as well as an HQL 4680S sterilization tunnel. Depending on the product, a tray-loading unit is used for cartridges and a VRK 3080 capping machine for vials. The combi line also has a connection to the freeze dryer. What’s special about the system configuration is its flexible transport concept. “We can switch between different dosage forms flexibly, and they always remain well-protected through the isolators,” explains Dr. Haefele.

In the same year the second project phase was completed, Boehringer Ingelheim received approval from the European Medicines Agency (EMA) to manufacture vials with freeze-dried substances, followed by approval from the U.S. FDA. Additional authorizations for foreign markets, including Japan, have also been issued.

Transparency all along the line

The manufacturing lines are organized in a U-shaped configuration, which enables fast and flexible response to production requirements at maximum operating times. They are located in modern, glass-walled cleanrooms, and are visible to both visitors and customers.

Haefele says, “The ISPE’s Facility of the Year Award and the new facility concept highlight our leading position as a manufacturer of biopharmaceutical drugs under aseptic conditions—and Bosch Packaging Technology—has made an important contribution to this success.”