ToBEUnique process prints an aluminum tube and plastic cap in one process to address counterfeiting. 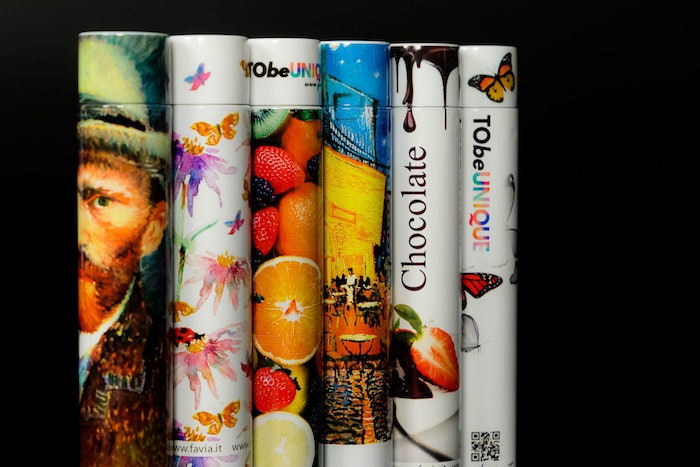 ToBEUnique process prints an aluminum tube and plastic cap in one process to address counterfeiting.

Tubettificio Favia has created a digital printing method that can be used as an effective anti-counterfeit resource: ToBEUnique. In the struggle against counterfeiting, packaging design can play a decisive role. According to the company, packaging is the natural complement of the product: enhances it, simplifies its fruition and communicates its values.

ToBEUnique simultaneously prints both the aluminum tube and the plastic cap. It permits new creative possibilities and enhances the uniqueness of the product, making it easily recognizable. It enhances product value and protects brand identity.

Digital printing on aluminum tubes can also be integrated with traditional offset printing, creating unique and inimitable results: complex graphics, elegant design solutions, shades impossible to get with the only offset process. A customizable design that can also be translated into a useful anti-counterfeit resource.

ToBEUnique was introduce in 2016 and finalized in 2017, and has won two awards:

• In 2016, the "Packaging Oscar " from the Italian Packaging Institute;

• In 2017, the World Packaging Organization’s WPO WorldStar Award, in the Health and Beauty category.

Counterfeiting is growing internationally, a reality that concerns all sectors, particularly in the pharmaceutical and cosmetic industries. Counterfeit products cause economic damage to producers, and become a serious risk for consumer health. The struggle against counterfeiting therefore becomes a priority involving all actors interested in the product’s value chain. And in this process, packaging plays a decisive role.

The latest report by the Office of the European Union for Intellectual Property, developed by Euipo, the European Union for Intellectual Property, and the Organization for Economic Co-operation and Development, the OECD, says that in 2013, international trade of counterfeit and [illegal] goods accounted for up to 2.5% of world trade for a value of $US461 billion.

In Europe, imports of these goods constituted 5% of all imports, up to $US116 billion (EUR 85 billion).

Counterfeiting affects all industry sectors, from electronics to clothing; with a turnover of $5 billion, with pharmaceuticals ranking fourth, behind electronics; optical, photographs and medical devices; clothing and textiles. The negative impact on the economy is alarming: the missed sales of original drugs cause economic and jobs losses. In the European Union, it caused a drop in sales of about 17 billion Euros, resulting in the loss of about 91,000 jobs lost and 1.7 billion Euros in public revenue.

In the submerged market, the web plays a key role: the sale of drugs and often counterfeit cosmetics is attributable to the Internet. In September, Interpol's Pangea X operation led to the record seizure of 25 million counterfeit medicines and drugs in 123 different countries, sold on the internet, for a value of over 43 million Euros. Pangea X led to the arrest of 400 people and the closure of 3,584 websites, stopping more than 3,000 advertisements promoting the sale of counterfeit medicines.

The Gx-Series printers, with new ink and Industry 4.0 capabilities, is designed to be durable and adaptable to production changes.
Stephanie Neil
Nov 10th, 2020

The Marchesini Group virtual event series picks up again Sep. 10 featuring the RL-F800, an automatic, fully servo-driven rotary labeler that can apply one wrap-around label on ampoules and vials at a speed of up to 800 pieces/min.
Marchesini Group
Sep 9th, 2020

Designed to reduce risk of contamination by eliminating print or paper labels, as well as ink or glue for pharmaceuticals and nutraceuticals .
Airnov Healthcare Packaging
Sep 1st, 2020

The acquisition will expand the laser technology offerings in Markem-Imaje’s marking and coding solutions business, improving the company’s position in identification and traceability equipment.
Aug 25th, 2020
More in Labeling/Printing

The Global MDO Next Generation film from Avery Dennison Label and Packaging Materials achieves a 60% improvement in clarity to create a ‘no label’ look.
Avery Dennison
Aug 25th, 2020

Eltronis, a speciality security printer, aided in the resurgence of two pharmaceutical brands that saw massive falls in sales due to Russian counterfeiters.
Eltronis
Jul 24th, 2020

The HERMA 400 can apply any type of adhesive label to virtually any type of product or package and is used across a wide variety of industries.
HERMA
Jul 7th, 2020

Luminer has inaugurated 7,000 sq ft of inspection space at its primary manufacturing facility will include a new back-number system and a third 100% inspection platform that will address the particular needs of extended content labels.
Jun 26th, 2020

The FastCodeReader is specialized for process speeds of up to 800 m/min and can handle optical character recognition and verification as well as barcodes.
Imago
Jun 8th, 2020