New heavy-duty, high-speed machine made for ease of maintenance and serviceability. 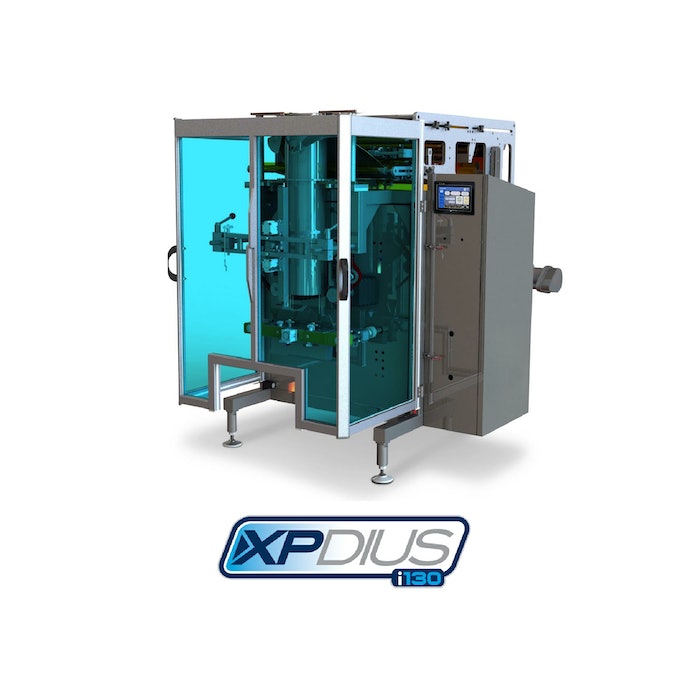 The new XPdius® i-130 vertical form and seal machine from Weighpack Systems Inc. is designed to reduce cost of ownership. The i-130 has many tool-less features that save time when loading film, replacing pull belts, and doing bag width changeovers.  The design allows for complete accessibility to the mechanics of the machine via the front, back, and inside of the frame easily and comfortably.

Introduced at Pack Expo 2012 in Chicago, the machine was seen running 125 bags/min while producing a 4.25-in. long bag. Two Panasonic servomotors and drives are used on the pull belt assembly and horizontal seal jaws. These drives assure total control over acceleration, deceleration, and positioning. The horizontal seal jaw speed is optimized as it is adjustable to travel in and out from as little as 1 to 6.5 in. The stroke opening of the seal jaws is a storable parameter on the PLC for quick recall when running a range of bag thicknesses.

Standard features include a cantilevered air film shaft that eliminates side chucks to hold film in place. Reload time of new rolls of plastics is fast compared to conventional film shafts supported on both sides using side chucks to hold the core in place. A splicing table with film clamping is a standard feature. This feature eliminates the film running out and requiring threading of the film through the rollers.

Most vertical form and seal machines use a motor with a roller or belt that sits on the plastic film to assist with the unwinding of the plastic. However, with the i-130 there is no motor that lifts and lowers every time a roll of plastic is changed. Instead, the unwind is done with two rubber rollers built into the film carriage. No obstruction is caused by the conventional unwind and there’s no cumbersome and heavy motor.

The XPdius i-130 comes with vacuum pull belts to reduce film slippage on the forming tube. Most conventional form and seal machines rely solely on the pressure of the pull belts squeezing against a former fill tube.

Available with automated film tracking, the i-130 is able to maintain a lateral position of improperly wound film. The complete film carriage will move left to right with an AC motor gearbox and a fine pitch threaded rod for minute adjustments. The film carriage can move from as little as 1/16 to 1 in.-wide to keep film centered and tracked.

The HMI color touchscreen is programmed to operate every possible function and feature. Every package or product is stored in the memory for easy recall and setup. The program includes several sequences of operations that allow for a proper relationship between the bagger, the filler, and the product. Options include filling above the jaws, below the jaws, or as the film pulls.

Choose from Sequential Fill cycle or Multi Fill for high speed. Most parameters include adjustable timers as well as on and off capabilities on all options. The main operating screen displays speed and temperature from the three and sometimes four temperature controls. The HMI program is designed for user friendliness. Several alerts exist to flash and notify operators of any problem. Customized and /or adding new features on the HMI are available and can be achieved quickly.

The XPdius i-130 uses little compressed air. In fact there are only three air cylinders on the machine and use no more than 1 CFM. An air regulator, gauge, and filter are included.