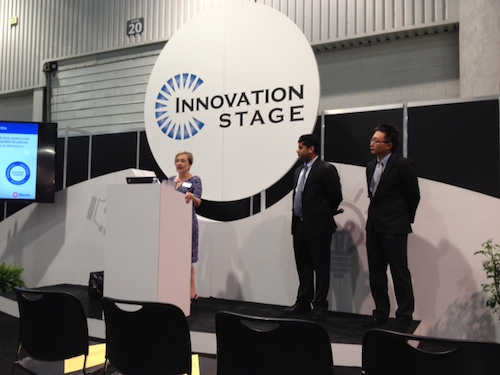 Transdermal patch delivery of drugs is a $25 billion market (2014) and is on its way to being a $40 billion market by 2018, with some 90 drugs in the pipeline that will utilize patches.

In their presentation, “Materials Science: Case Study for Rational Design of Transdermal Patch Packaging,” Rishabh Jain and Yuan Liu, Research Scientists with Bemis Healthcare Packaging took the Innovation Stage to present the results of their testing of two alternatives to Barex®, whose sole production plant closed this year according to an INEOS Barex online announcement. The testing examined chemical resistance, diffusion barrier performance, and ability to resist delamination.

Bemis’ CXB™ Sealant, a blown film, is designed to hold up well when tested with nicotine using spectroscopy and solubility modeling to determine its performance. Bemis has also modeled a PET cast film for use in transdermal patch construction. Heat sealability—a perceived weakness of Barex—was also tested for both films.

The company uses a simple packaging system, able to deliver most drugs, and provides free shipping of packs with easy, detailed instructions, as well as regular consultations to improve patient experience.
Jul 22nd, 2019

Described as the world’s first all-in-one wearable breast pump that fits inside a bra, it incorporates a doughnut-shaped pouch/bag that holds breast milk. An oval cutout in the center of the bag makes it easy to hold and fit neatly within the pump.
Mar 8th, 2019

Quantum Health swaps drug-store efficacy cues with a focus on nature for the packaging design of its natural health supplements, resulting in double-digit sales growth for the brand.
Oct 29th, 2018

New branding and packaging draws a link between the potency of Tribe’s all-natural sports nutrition products, the joy of the outdoors, and the overwhelming power of the natural world.
Jul 2nd, 2018

BeeBetter Single-Use Pouch Aims to ‘Help the Medicine Go Down’

By putting patients at the center of its design development, this conceptual pouch employs shape and a dispensing device to help with medication delivery and adherence.
Apr 9th, 2018

DuraMed and DirectSeal offer barrier and breathability with a uniform seal for tamper evidence in medical product packaging.
Mar 29th, 2018

Multilayer, heat-stable composite of polyester and polypropylene copolymers is a steam-sterilizable chevron pouch that maintains durability and peel characteristics after the heat cycle.
Feb 5th, 2018

Designed for low-to-moderate production rates for industries including food and beverage, pharmaceutical, nutraceutical, health and beauty and others.
Dec 7th, 2017

Live from HCP EXPO: How Medical Marijuana Can Benefit from Flexible Packaging

The marijuana industry may still be facing hurdles, but processors can take many cues from conventional food and medical packaging. An expert weighs in on trends, child safety and regulatory issues.
Sep 29th, 2017

New system automates the hand-loading process for placing an insert into a fold-and-tuck-style tray.
May 3rd, 2017