The FlexClean combines flexibility, quality and output with a modular approach. Achieving outputs of up to 180 bottles/min, the machine can accommodate different transport carriers and formats. 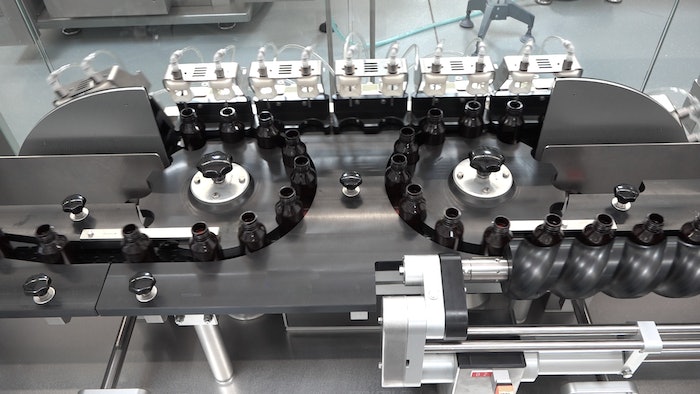 groninger, provider of filling and sealing machines for the pharmaceutical, cosmetics and consumer healthcare industries, has announced a new air-rinsing machine based on the company's ready-engineered philosophy.

The modular approach to its FlexClean machine is part of the company’s Business Line concept, which was introduced into its product portfolio for the Cosmetics and Consumer Healthcare sectors a few years ago. In the past, groninger had purchased air-rinsing machines from third-party suppliers, but has now developed the stand-alone machine.

The FlexClean is designed in an oval shape. The company reports that, compared to a rotary design, the time during which the bottles are upended in the conveyor and rinsed is much longer, so it is far less likely that particles will be left in the bottles.

Flexibility remained top of mind for the design, while maintaining high-output performance:

The FlexClean combines flexibility, quality and output with a modular approach. Achieving outputs of up to 180 bottles/min, the machine can accommodate different transport carriers and formats.
Jun 4th, 2019

On display at Pharmintech 2019 in Bologna, Italy, was an impressive combination of one isolator plus various filling machine modules that can be wheeled into it to deliver a great deal of flexibility to biotech and pharmaceutical companies engaged in aseptic filling.
Pat Reynolds
Apr 10th, 2019

Pierre Fabre and Steriline collaborated in implementing a system to interoperate with a sterilization tunnel and reduce downtime as much as possible.
Keren Sookne
Dec 14th, 2018

Stericlean series that improves accuracy, efficiency and patient safety in a germ-free environment will be shown at PACK EXPO International.
Aug 22nd, 2018

Company introduces INTEGRA at PACK EXPO International 2018, a machine that integrates both an isolator and filling machine from the design process.
Aug 7th, 2018

Tailored to the requirements of the user, the STISO is modular, ergonomic and fast.
Jun 26th, 2018

The new alliance assists pharmaceutical companies with their start into the manufacturing and packaging process of transdermal dressings and oral dispersible films. The technology leaders Coatema Coating Machinery GmbH and OPTIMA life science GmbH are behind COMEDCO with their expertise in converting and coating with pharmaceutical medicines.
Jun 19th, 2018

An automatic inline capping machine designed specifically for large containers and closures, with easy changeover and speeds up to 60 containers/min.
May 4th, 2018

High-Speed Aseptic Filling and Capping in a Small Footprint

Advanced systems are designed to safeguard the operator, the product and the environment. Modularity coverage at all containment levels.
Sep 21st, 2017

Service allows for products that are not originally cleanroom-complaint to be cleaned and re-packed for better use within a cleanroom.
Jul 27th, 2017

By incorporating a robotic arm, one machine builder is bringing the benefits of pulsed light to the world of pre-filled tub sterilization for syringes, vials and cartridges.
Keren Sookne
Jun 19th, 2017

When a pharmaceutical manufacturer could not find a machine to fit their needs, they found a collaborative and innovative partner.
Keren Sookne
Feb 22nd, 2017
Packaging/Filling

Three cleanroom chambers for pharmaceutical provide a safe working environment and can be used to increase the range of feasible tests.
Nov 11th, 2016