Pierre Fabre and Steriline collaborated in implementing a system to interoperate with a sterilization tunnel and reduce downtime as much as possible.

Keren Sookne
Pierre Fabre and Steriline collaborated in implementing a new rotary washer to interoperate with a sterilization tunnel and reduce downtime as much as possible.

With subsidiaries and offices in 47 countries and distribution in over 130, Pierre Fabre’s factory in Pau (southwestern France) specializes in aseptic filling of injectables for cancer treatment, such as cytotoxic and biologic products.

The pair once again collaborated on a bespoke project for Pierre Fabre’s aseptic vial filling lines.

In 2016, Pierre Fabre wanted to meet customer needs by producing a new format on one of its aseptic vial filling lines. But the new format would not work with the existing linear washing machine, which connected with a sterilization tunnel (also supplied by Steriline). A new washing machine was required.

The “simple” task was actually a three-fold challenge: introduce the new format while minimizing structural interventions to the existing system; find a system that could interoperate with the sterilization tunnel; and accommodate customers by reducing downtime as much as possible.

After a supplier assessment, the company selected Steriline’s proposal due to their technology, quote, delivery time, after-sales assistance and depyrogenation tunnel expertise.

Pierre Fabre selected a rotary washing machine, similar to what the company implemented on another aseptic processing line. To ensure things went smoothly, a dedicated Steriline project manager was assigned to work on the implementation and assess potential improvements and customization.

In addition to accommodating the new format, “The new design also decreased risks in the washing process with less breaks and scratches than in the linear one. At the same time, ergonomics were improved in accessibility, consistency and overall safety,” says Hervé Santelli, Engineering Manager at Pierre Fabre.

“The rotary unit is mechanically simpler than the linear unit and this brings the best balance between washing solutions and service reliability. The major issue regarding the rotary washer that we found in the past concerned water consumption and it was significantly reduced on the new STERILINE model,” he says.

The next challenge was that the existing linear washing machine and sterilization tunnel shared the same switchboard and HMI control panel. Replacing the washing machine with a new model would have meant suspending production for several months to update the electronics and HMI panels, then revalidating the tunnel and software.

To avoid extended downtime, Steriline proposed a solution that would enable the machines to operate independently, keeping the filling line running until the final installation. Engineers developed an additional switchboard to autonomously supply power to the new washing machine and keep the tunnel running on the existing electric panel, where software was embedded to control the new washer.

“To limit the integration and validation time, we choose to keep the whole line architecture in place, with the tunnel HMI panel and all parameters already set for the formats still in use,” notes Santelli. The new washer received its own HMI to allow for factory acceptance tests in Steriline’s facilities, and then to run tests at the Pierre Fabre facility, just before delivery.

Thedepyrogenation tunnelwas also physically modified at its side entry to accommodate the new rotary machine.Santelliexplains, “The linear washer outfeed was filling the tunnel row by row, while the rotary washer flows the vials one by one. The mechanical and software changes were designed, adapted and validated by Steriline at the Pierre Fabre facility during the washer installation, with no extra trips.”

Because Steriline carefully planned the project to maintain the existing system unmodified as much as possible, the project saved significant time in the development, testing and validation phases.

From the order of the new rotary machine in mid-August 2016 to the site acceptance test phase in early February 2017, the project was completed in six months.

“The total installation took six weeks, including 1.5 weeks for dismantling the linear machine and installing the new rotary washer and one week of testing with Steriline.

“The expected format change performance was reached. The new format change lead time was reduced by 75% on average compared to the theoretical evaluation we’ve done on the linear washer; the time needed to change older formats was reduced by 20%,” notes Santelli. “In addition, the new washer is smaller and more accessible, with only nine parts for one format that could be easily mounted in a few minutes.”

The new washer has been in use since 2017. Santelli says, “Steriline’s high specialization, know-how and experience in the aseptic processing market, coupled with their strong innovative attitude in project management, allowed us to achieve our goals in due time, with a solution that brought benefits to the efficiency of the whole vial filling line.” 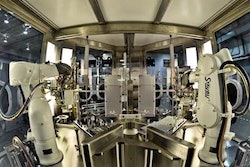 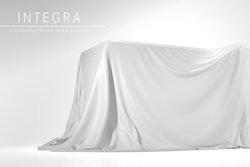 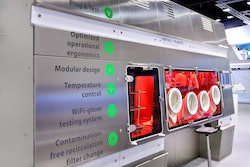