By the Numbers: Robotics, Security Breaches and More

Take a look at some recent stats from the packaging, healthcare, logistics, regulatory and serialization sectors... 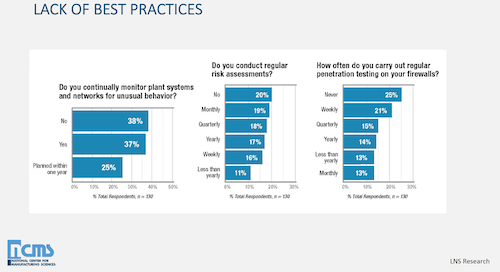 Lack of best practices in cybersecurity.

24%
THE PERCENTAGE of security breaches in 2018 involving healthcare organizations, up from 15% in 2017, according to the 2018 Verizon Data Breach Investigation Report.

138,000
THE NUMBER of industrial robots installed in China in 2017 (approximately one third of all industrial robots sold worldwide). The U.S. purchased around 33,000 manufacturing robots in 2017.
Source: International Federation of Robotics

37%
THE PERCENTAGE of manufacturers that report they continually monitor plant systems and networks for unusual behavior, according to LNS Research, as reported by the National Center for Manufacturing Sciences.

3.7 Million
THE NUMBER of medical devices in use today connected to and monitoring various parts of the body, according to Nexeon MedSystems.

78%
THE PERCENTAGE of survey respondents in the cannabis industry in favor of industry-wide standardization of the format of product tracking or identification codes.
Source: National Cannabis Industry Association

3.6 Billion
THE AMOUNT the global medication adherence market is expected to reach by 2023, growing at a CAGR of 12.3% between 2013 and 2023, according to Research and Markets.